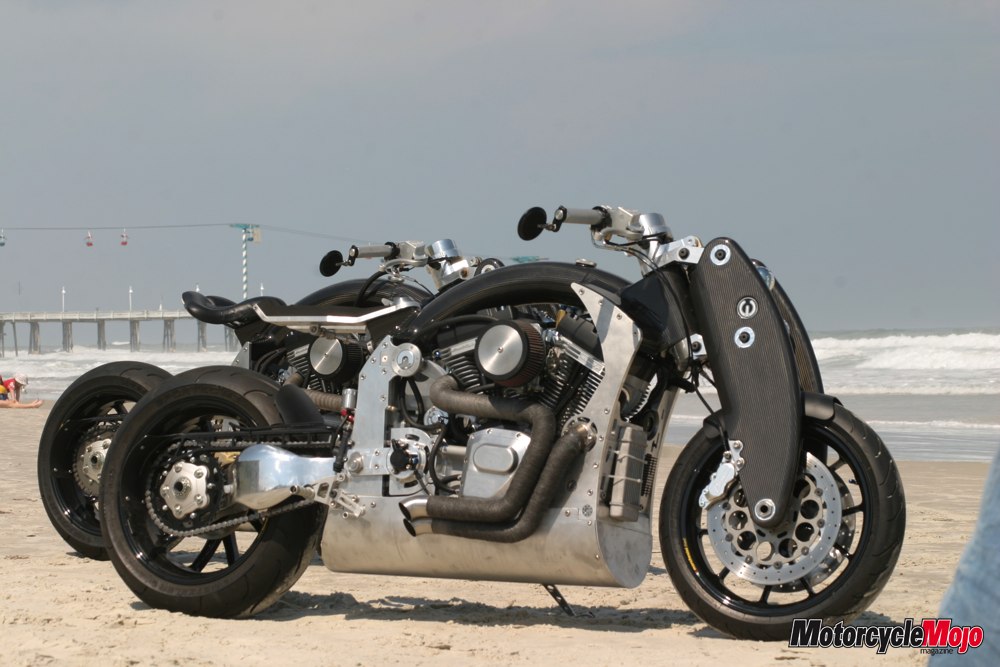 For the most part, new motorcycle press launches follow a standard format; fly somewhere around the world, learn about the changes, updates or redesigns, and then spend a day or so riding the new machine to evaluate. These launches are always interesting and illuminating, but with progress in the two-wheeled world being highly incremental these days, it is not often I get to ride something so outrageous, so out of the box, and so completely different that it leaves me scratching my head as I attempt to process what just happened. Riding Valentino Rossi’s M1, the 260 mph Bud Busa, and the Confederate Hellcat are three such experiences that immediately spring to mind. But, as wild as these rides are, they are the exception rather than the norm, so when I got the call from Matt Chambers that his new Wraith was ready to ride, I didn’t hesitate to say yes to meeting him in Daytona, especially since he had something up his sleeve.

For the first time in history, Confederate Motorcycles would reveal not one, but two, of their mind blowing new Wraith motorcycles to the public during Bike Week. Production designer, Brian Case, would ride the second one with me, and we were free to blast around Daytona to see what sort of trouble we could get into. Truth be known, company founder and owner, Matt Chambers, was secretly waiting to see what sort of reaction we would generate from what is one of the wildest motorcycles to be produced this decade at the craziest bike meeting of the year.

My first introduction to the Wraith was back in early 2004 when I visited Confederate Motorcycles in New Orleans. At that time, I rode their incredible Hellcat, and came away extremely impressed. While I was in New Orleans at that time, I was shown drawings and parts for the next Confederate creation, the Wraith, and from the moment I saw the early sketching and computer designs, I was stopped in my tracks. A cross between a turn of the century board tracker and a mid-sixties British café racer, I didn’t immediately find the bike attractive. It didn’t conform to anything I could relate to on two wheels, and with hindsight, this is exactly what Confederate was hoping to achieve.

Designed by J. T. Nesbitt, the first concept bike appeared on the cover of Robb Report Motorcycling in the spring of the same year. It sent out a shock wave through the motorcycle industry and certainly got a lot of tongues wagging. By the winter of 2004, the first prototype was up and running, with the Confederate crew heading to the Bonneville Salt Flats to see what she would run. Realize that an ultimate speed record was never the intended mission. The true success of the Bonneville run was that a small company like Confederate could take a motorcycle design from J.T. Nesbitt’s head and, add Brian Case’s engineering talents, to create a running model in such a short space of time. At Bonneville, the Gods of speed were not unkind. Sure the salt was very wet, and top speed times for everyone present were down, but the Confederate Wraith ran true, trucking home to Louisiana with a 131 mph time slip and a message that the Confederate meant business.

The next part of the story concerns one of the greatest natural disasters to hit the United States – Hurricane Katrina. Destroying Confederate’s headquarters, it forced the small company to relocate to Birmingham, Alabama. The reason for this move to the “Detroit of the South” was one Mr. Barber. As owner of the world’s most prestigious motorcycle collection located at the Barber Museum, and one of the finest race tracks right next door, it was a natural fit for the American motorcycle manufacturer. Matt Chambers vowed it would make Confederate stronger, and minus J.T. Nesbitt, Chambers and the staff moved east on Mr. Barber’s invitation.

Constructing a motorcycle of this nature is no easy task, and the trials and tribulations Confederate has endured are well documented at www.Confederate.com. So, when I got the call to ride the Wraith, it was a moment that will go down in my motorcycle all time greats. Knowing what level of adversity Matt Chambers, Brian Case, and Ed Jacobs have endured these past two years since Katrina, the fact they would be in Daytona with not one, but two Wraiths, proved that Confederate has weathered the storm. Talking with Chambers I learned Confederate has taken over 40 orders for the new machine. This was music to my ears, and it felt good to know that Confederate is heading into 2007 on such a strong footing.

Bike Week is a non-stop barrage of sensory overloads, and riding to meet Matt and the gang a little after dawn on the last Saturday, I enjoyed the eerie quiet as I made my way through the thick fog that was rolling in off the Atlantic. With the vast majority of Bike Week’s attendees sleeping off the previous evenings debauchery, I arrived to find the crew rolling out prototype number four and prototype number five.

For the first part of the day I would ride number four, and would switch out to number five later. Brian Case gave me a quick run down on the starting procedure and we hit the early morning Daytona streets. This starting procedure became one of the most engaging parts of my Confederate Wraith experience as I ran through my series of pre-flight checks: Compression release buttons depressed, ignition switch to the first position, fuel pump switched on, select neutral and then hit the starter button, making sure my left leg was no where near the exposed clutch.

Firing immediately to life, with a cool jet airplane-like whine, the 120 cubic inch V-twin quickly settled into a throaty idle. Called the B120, the counter-balanced engine produces around 125 horsepower, and a monster 131 foot-pounds of torque. Four and a half inch pistons thump up and down, but vibration is minimal, and pulling in the heavy hydraulic clutch I located first gear and hit Atlantic Avenue.

Ride position is something akin to a late ‘70s Laverda Jota. It puts you in the race crouch, but with more room than a smaller Japanese sport bike. The bars are wider, and the pegs, while rear set, are not unnaturally cramped. Sitting on top of an exposed engine is weird, as there is no gas tank between your legs – the fuel is located under the engine. The slim carbon fiber composite spine frame doubles as the oil tank, doing nothing to dampen out the noise from the valve gear. The seat is equally weird with nothing behind, and adds to the sensation of being suspended in mid-air when you ride.

As a prototype, there are issues to be addressed before the bike goes to final production, and I was flattered that Brian and Matt were eager to hear what I had to say. Trying to nitpick someone’s work of art is not an easy task, but likening it to an editor adding some commas, and deleting a few redundant words from an article, I made my suggestions. I personally think the metal grips need to go, in place of some softer, more compliant rubber items. The saddle needs to be a tad wider, thicker, and repositioned higher and further back. As tested, it was too flat and became a pain in the arse, literally, after a day of riding. Also, the shifting needs some work, as it was too stiff to be comfortable. And, while I was complaining about the seat, I thought it would be nice to raise the bars an equal amount to offset raising the rider’s rear end. The rear brake needed some attention, but in the broad scheme of things I think these are minor details when the rest of the bike works so well.

With a sporting wheelbase of 58.5 inches, and a claimed weight of 410 pounds, the bike maneuvered easily, and Brian and I were soon hacking through the traffic that was building up as we blasted from one adventure to the next. Attracting crowds at every stop, and more than our fair share of beautiful women, riding the Wraiths around Daytona was like having a large spotlight following us. Every time we parked, people just swarmed around the bikes, and from the amount of questions we fielded, I think the girder style carbon fiber front-end was the most talked about, followed by the lack of a gas tank, and then the “who makes it?”. Common topics that actually seemed to punctuate every round of questioning.

Riding down Main Street, the number of camera lenses pointing our way was phenomenal. Adding to the mystique, Brian and I kept our tinted shields closed, which added to the slack jawed look that we saw so many times during our ride in Daytona. With Confederate having such high profile customers as Brad Pitt and Tom Cruise regularly seen riding their machines, it certainly felt like we were celebrities for the day.

Ending our day out at the Daytona International Speedway for a photo session with www.Speedtv.com’s Joe Tripp, I switched to the newest version of the Wraith and within seconds let out a loud cry of delight. As a more refined version of number four, the steering was immediately quicker, the brakes sharper, and the way the engine pulled up through the rpm range was sharper and stronger. It was the perfect end to the test. I had concrete proof of the positive direction the Wraith is moving in, and got to lay it into some turns at last. Rolling on top shelf suspension and Marchesini wheels, it wasn’t really a surprise and I am looking forward to a ride in the twisting hill country around Confederate’s Alabama headquarters one of these days soon.

As something of a retroactive time traveler, the Confederate Wraith is like nothing else on two wheels. Raw, visceral, with more than enough sporting abilities for the regular rider, these things pall into insignificance when compared to the feeling and sensation of roaring down the road on one of the most visually stimulating pieces of motorcycle artwork in the world today. An amalgamation of American iron, modern components, wild imagination, and thinking not rooted in the traditional, the Confederate Wraith, priced at $62,500 USD, is most certainly not for the masses, nor was it ever intended to be.