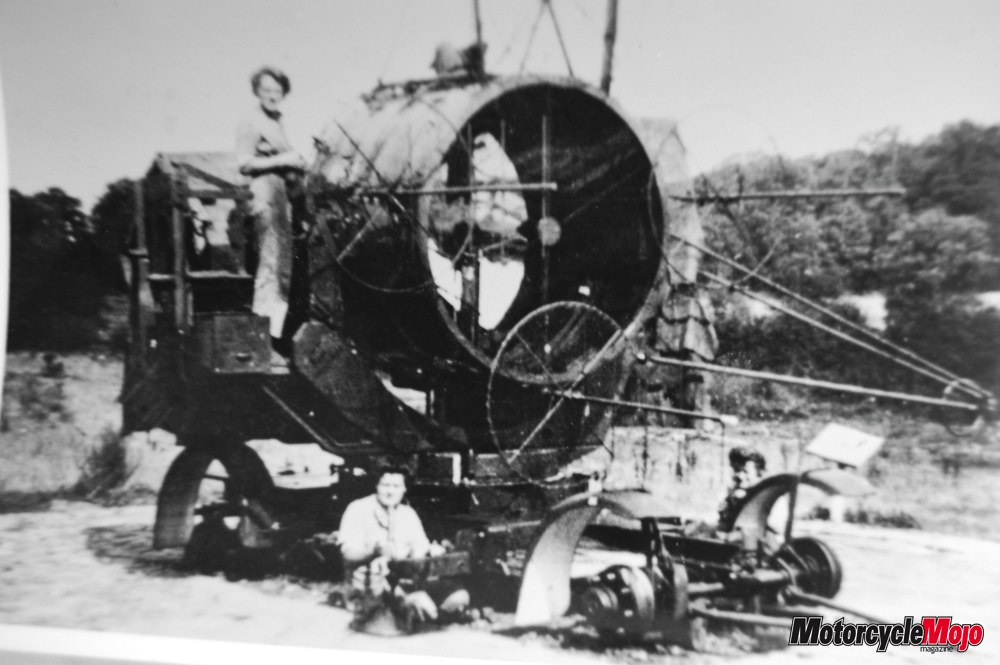 The Hope Diamond is probably the most famous piece of bling known and it looks kinda sharp, but it isn’t something that really turns my crank. I put much more value on human gems because that’s what’s really important. Since I have this wonderful job of penning articles I can tell you of a human gem that I had the good fortune of meeting; simply listening to and trying to do justice to the story I was told.

Jean Crawley D.R., she’s just slightly older than thirty ‘something.’ When we first met at the Toronto Motorcycle Show, Jean asked me a question that I had really never given any thought to, not sure why, but it just never crossed my mind and I’ll ask you the same: How many women do you think served in the British Regular Armed Forces during WWII? I know the answer now, Jean told me–because she was one of them.

Was Jean one of the girls depicted in a WWII black and white movie answering phones, madly typing top secret memos and moving magnetic battleships across a big chalk board whilst wearing a perfectly pressed uniform? Nope. Not by a long shot.

Picture this. An Ariel, or a Norton, or perhaps a BSA motorcycle, covered in grime and mud comes whipping around a war torn corner. The rider comes to a stop, fishes out a map, glances at it and then heads off with all due haste to personally hand a note to whomever it was addressed to. Once the note was delivered the rider jumps back on the bike, massages the kick-starter to the sweet spot and then ‘gives it.’ The rider and bike peel away with another note, to be delivered somewhere within the on-going wreckage of the United Kingdom in 1943.

Underneath all that grime and dangerous riding on that bike would have been Jean. Jean Crawley D.R. – Dispatch Rider.

Now Jean didn’t start out as a D.R. In 1942, at the tender age of seventeen, she joined the British Regular Forces. After some brutish training by some jerks that thought women in war were nothing more than a liability, she was posted to a job on a searchlight crew, specifically the all-women 93rd Searchlight Regiment of the Royal Artillery in North London.

Flashback to all those movies we’ve all watched: the Blitz was on, London was on fire, hell was falling from above and in defense the sky was being probed by searchlights so that anti-aircraft gun crews could see the target. Personally, I always pictured some battle-hardened guys lighting up the sky and blasting away. Wrong again. Many of those probing lights were flashed across the sky by battle hardened gals who spent years sleeping with one eye open, in their clothes, boots at the ready. Even though many prayers were offered for a foggy night, the crews were always ready to be up, on, and running the lights in way less than two minutes. Jean recalled one of her ‘girls’ on the lights being severely injured by fire from an incoming enemy aircraft. Jean desperately wanted to help her but she didn’t dare because if she left her light to tend to one person, many more could have perished. Searchlights weren’t always used for defense either, often times a crippled aircraft would be coming in with everything shot up and the searchlights would go on, acting as a guide to the nearest safe landing field. Jean said, “we laughed together, cried together, cared for each other and did one damned fine job of it.” Jean paused and held her hands to her heart, “those girls were my family and I’ll…I shall never–ever forget them.” Next time you watch a WWII war movie, think of that picture.

In 1943 a chance came for Jean to try something different; dispatch riding. At that point I just had to ask, “Jean, you were a hell-raiser weren’t you?” “No,” she answered, “this was a challenge.” Personally I think that Jean was understating the hell-raiser moniker, the gleam in her eyes gave it away.

Paperwork was sent off and Jean soon found herself in Kinmell Park, North Wales to begin her training as a dispatch rider. From her description of the training, the same jerks that wanted to drum women out of any active role were still hard at work. Emphasis on being able to pick up a downed bike was a big part of the regular motorcycle training routine. After all, if you drop your bike and can’t pick it up then you won’t make much of a dispatch rider. Jean told me how they were instructed to pick up the bike and how at first it just wasn’t working out. Not one to give up, Jean persisted at which point adrenaline took over. “It made me so mad, I just picked it up and was off,” she said. So there.

General: With more experience will prove to be a good D.R.

Now let’s get the real goods on this report card.

Maintenance: A soft touch on a kick-starter told Jean where the sweet spot was, “pistons need to be just at the right place you know.” Jean knows how to use tire irons and did, many times. Jean rode 1940 bikes and always made it home. Damn. Beat that.

Map Reading: Even though the instructors purposely changed destinations, she always made it back. So to a few of the D.R. instructors back then–suck that one up lads and put your pompous posturing where the monkey hid the peanuts.

Grade C: Grade C? Personally, I think the Lieut. Colonel that penned that grade deserves a slap upside the head. But before we all grab pitchforks and hockey sticks I say we simply, nationally and unanimously change it to A+.

Write in and tell me you agree.

So what was Jean’s favourite ride? The Ariel 350 hands down. I asked her, that if she could put all the tough stuff out of her head, divorce herself from the world of military messages to be urgently delivered– right now, did she enjoy riding? “Oh yes, very much…very much.” There was way more than just a little sparkle in her eyes with that statement, I saw it. Jean told me of a time where she had just finished delivering a message and there was a teahouse close by that had some regular forces guys in it. She decided it was teatime for her too, what the heck, fair is fair. She told me that all the girls carried some powder, lipstick, a comb, etc, in their uniform top pocket. So she pulled the bike over, hopped off and wearing a typical D.R. uniform complete with a helmet and all the road goop that goes with it, sauntered into the tea room and from there found the powder room. The helmet came off, a few touches here and there and within minutes of sitting at a table was surrounded by guys. Go figure! It’s nice to know that some things remain constant.

Jean was eventually posted back to her original regiment but this time as a dispatch rider. She recalls a time at her regiment when the top of a water tower was blown off. “No injuries thank God,” but the gals knew they had to get it reassembled and in time they did–but with the addition of a wee note on the top of the tower. ‘Come to Tea’ in bright white letters was emblazoned on the water tower top. The girls enjoyed watching the Spitfires tip their wings in salute as they screamed overhead. Years later at a reunion, Jean was chatting with an Air Force Vet that recalled this odd water tower that he often flew over with the message, ‘Come to Tea,’ on the top. Good thing there wasn’t a landing field close by or every Spitfire within a hundred miles would have been double-parked.

Did Jean ever lose it and go down? You bet she did, more than once. As a matter of fact, Jean spent V.E. Day in the hospital nursing a busted collarbone and some nasty road rash. Typical to Jean though, she convinced a nurse to allow her out and she went dancing. One beat up D.R. celebrating the fact that the war was over! The next time Jean wanted to ride would be her choice, on her terms, with her map and her own schedule. Way to go Jean!

Okay, so how many women served in the Regular British Forces? When Winston Churchill said: “Let the women come forward,” 640,000 did. That’s right folks, almost three quarters of a million women, as Jean says, “We just hung up our aprons, covered our typewriters, said goodbye to our families and went to war.”

Those that hung up their aprons and went to war are Jean’s family. “We laughed together, we cried together, we looked after each other and that bond has never left me. There was just something there that…like a bright light, that held us all together.” Jean proudly showed me a Christmas card from one of her WWII mates in the U.K. It holds a special place on the wall. As it should.

I finally asked Jean that if she had a message to tell young women today, what it would be. Jean studied the question for a moment and jokingly said, “keep your legs crossed.” We had a good laugh and I told her that I couldn’t print something like that, wait a minute, see, she’s tricky. Taking on a more serious tone she said, “Don’t ever lose sight of your dreams and don’t let anyone steal them or stand in their way.”

Every person who enjoys the life, liberties and the freedom of speech should thank you Jean. To me, you are a hero and the Hope Diamond simply pales in comparison. MMM

Editor’s comment: After reading this article on Jean, I would like to mention that I am honoured to say that my Mother was also included in the 640,000 women who joined the British Forces.

Although she was not a dispatch rider she did enjoy time on the back of my fathers motorcycle after the war, which I am told was a 1929 Scott.