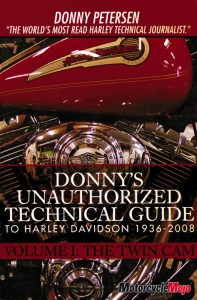 Donny Petersen, founder of well-known Heavy Duty Cycles in Toronto, ON, has begun an ambitious project by releasing his first of twelve technical books that will cover all things in the Harley-Davidson power train from 1936 to 2008.

Dubbed as the ‘The world’s most read Harley technical journalist’; Donny has been writing ‘Techline’ for American Iron Magazine since 1992 and he really knows his stuff when it comes to the inner workings of a Harley engine regardless of year. He opened Heavy Duty Cycles in 1974 and has never looked back. He has been trained by some of the best engineers in the field and has taught hundreds of people himself, from technicians to designing a tech-school curriculum. In his 35-years of wrenching on Harley-Davidsons, he has worked on countless Flatheads, Knuckleheads, Panheads, Shovelheads, Evos and Twin Cams.

Volume I focuses on the years 1999-2008 with the Twin Cam engine. Donny dissects the Twin Cam, both the 88ci and the 96ci engines, and delivers the goods on the pros and cons of the engine. Throughout the book, he tells it like it is and how to remedy areas of the engine that need, or will need, repair and he also offers suggestions to aftermarket fixes to make the engine more efficient. Donny explains all internal aspects of the Twin Cam engine; noises, engine breathing and lubrication, engine cooling as well as getting into detail with the 6-speed transmission. Donny covers simple procedures like regular maintenance to the more complex tasks like porting and polishing the cylinder heads but does so in easy-to-understand language.

Anyone that is interested in knowing more about the inner workings of a Twin Cam engine will find this book extremely valuable.

Volume I: The Twin Cam is 430 pages and includes many photos and charts for reference. It is available at Chapters and other fine newsstands at $27.95 (paperback).

His remaining eleven books in the series will be:

Volume III: How It All Works