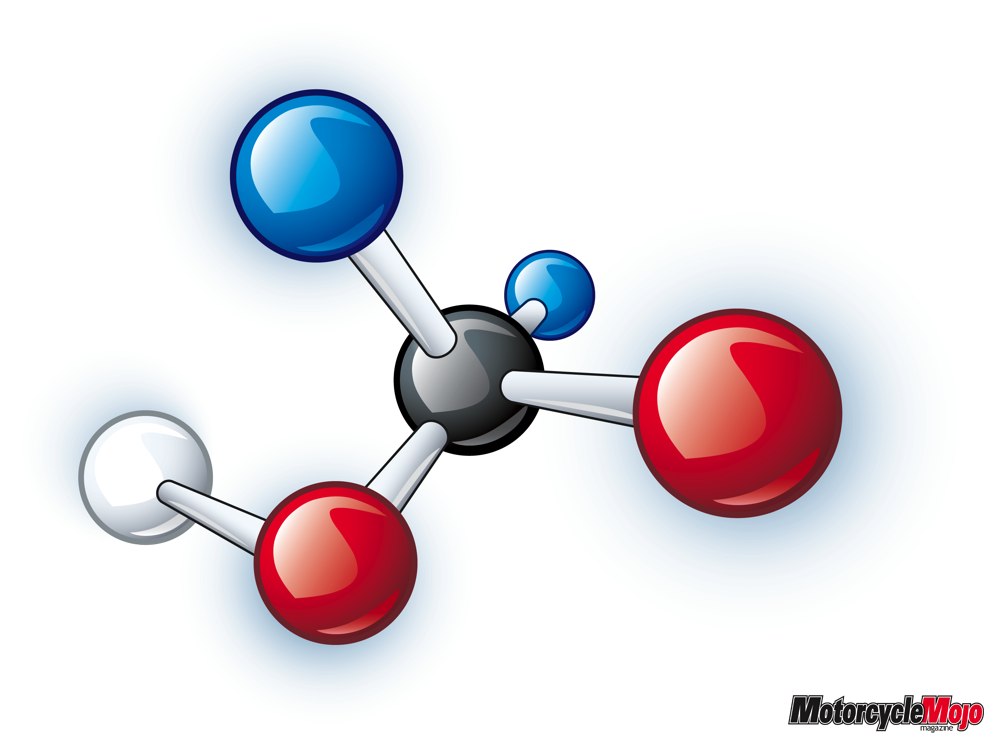 Tires are arguably one of the most important items on your motorcycle. Those two little contact patches, smaller than the size of your palm, are the only thing between you and the road. An under-inflated tire will skid and hydroplane more easily and will build up unnecessary heat that will decrease the life of your precious rubber. This article isn’t really about tires, but it is about a simple product you can use if you wish that could keep your tires in better condition over the long term. Research has shown that there are tens of thousands of accidents each year on our roadways that are directly related to low tire pressure.

I recently took possession of a new truck and while the salesman was doing an excellent job of going through the list of safety features that accompanies most, or all, new vehicles these days, I had to stop him and ask, “What do you mean there is nitrogen in the tires?”

I’ve been an auto mechanic since the late ‘70s and although I have to admit I’ve barely worked on a car in 15 years, I have been around motorcycles in a big way for most of my life. All those years of being involved with things that roll on rubber and I had never heard of nitrogen in tires. I figured that if I had never heard of nitrogen in tires, then most of you probably haven’t either. I thought I would try to shed some light on what seems to be somewhat of a controversial subject. Not controversial in a safety way, but controversial in a, ‘is it really worth it’ kind of way.

There are obviously two schools of thought on the subject, or maybe three. Those who truly believe in nitrogen, those who think it’s a bunch of hooey, and those who can’t decide either way and therefore it makes no difference to them.

While nitrogen in tires is nothing new for vehicles that demand high speed and high heat requirements like the Space Shuttle, commercial aircraft, racecars and race motorcycles. Those high-speed vehicles have been using nitrogen in their tires for years now, but it is however relatively new for the general consumer vehicles that you and I drive.

One of the main theories behind nitrogen filled tires is that nitrogen molecules are larger than the oxygen in regular air and therefore do not penetrate the tread and sidewall rubber as easily, making it harder for the tire to naturally lose air pressure over time. The smaller molecules of regular air will more easily penetrate the tire carcass and as a result, lose air pressure more readily. This is why your tires need to be topped up over time even though there are no apparent leaks. It is estimated that regular air can leak out of a tire six times faster because of the smaller air molecules compared to the larger molecules of nitrogen. In other words, what leaks out in one month with regular air will take 6 months to leak out with nitrogen.

Another downfall with regular air is that it contains moisture and compressing the air concentrates that moisture. When you compress air, it takes up much less volume but the percentage of water by volume is greatly increased. As the tire heats up from regular highway use, that moisture inside the tires heats up and expands, increasing the air pressure inside the tire. This is why you are supposed to check tire pressure on a cold tire, checking tire pressure on a hot tire will give a false reading due to the increased pressure.

Nitrogen’s inherently low moisture absorption characteristics will not fluctuate a tire’s pressure like air will and that makes it one reason why racing vehicles use nitrogen, since even the most modest pressure increase can radically alter their handling.

An important factor to consider is that regular air is made up of about one-fifth oxygen and we all know what happens when oxygen meets moisture; oxidization happens. This oxidization attacks steel and aluminum wheels, tire valves, the steel cords and belts inside radial tires and can even damage the rubber itself over time.

One reason that the high-speed tires on racecars and aircraft use nitrogen is that tires using regular air can get so hot that the oxygen can actually catch on fire. Nitrogen on the other hand does not support combustion, although this is a moot point at the consumer level since our tires would never get that hot.

So far it seems a no-brainer for nitrogen, but let’s consider the factors why there are many people who don’t believe it makes a difference.

First of all, regular air is made up of about 78% nitrogen, 21% oxygen and the remaining 1% is made up of ‘other gases’. One has to wonder if removing the 21% of oxygen is really going to make a difference since three-quarters of regular air is already nitrogen. Considering the impact that 21% of oxygen has in terms of oxidization and its combustion properties, it seems to be a pretty significant amount and might make sense to get rid of it.

Regular air is free and all that is needed is a compressor in order to inflate your tires. Nitrogen has to be purchased in cylinders or a special machine has to be acquired in order to separate the nitrogen out of the air. These machines can produce nitrogen that is 95% pure, leaving only trace amounts of oxygen in the nitrogen. Filling a deflated tire up with nitrogen will dilute the nitrogen a little more because it is regular air that’s inside the tire to begin with. Adding nitrogen to the deflated tire results in about 93% nitrogen inside the tire.

Because special equipment is needed, or the tire shop has to buy nitrogen cylinders, it will usually cost you to fill up your tires with nitrogen, although the more common nitrogen gets, the less, if anything, it will cost. But what happens if you need to top up the pressure of a tire? Do you search for a supplier that has nitrogen on hand? Going to a regular air pump, whether a hand pump, a gas station compressor or your local tire shop and putting in regular air dilutes the nitrogen even more, which defeats the purpose of using nitrogen in the first place.

More to think about is the fact that sure, while it has been proven that over time regular air can degrade a tire, the rim and a tire valve, how long do you actually keep your tires on a motorcycle for? We have always used regular air and isn’t it conceivable that by the time any degradation has happened to your motorcycle tires, the rubber would probably be too hard to safely ride on them anyway and they should be replaced. As for heating up and possibly catching on fire as they claim a race tire can do, I doubt if you could even go that fast for the required length of time on your street bike.

Ok, so bike tires get changed fairly frequently depending on the bike, your riding habits and the amount of miles you put on in a year. At which point the rubber is new, the rim is cleaned up and a new tire valve has been installed so let’s forget about corrosion in the tires for now. What about other components that are out of sight and therefore out of mind? Take for instance, suspension components that take air. How many times have you ‘changed the air in your shocks’? I bet never, in fact, I bet you have never thought of it. Replacing the air in your shocks with nitrogen might be a wise thing to do since shocks don’t get changed like tires, so over many years of operation there is compressed air holding moisture that is oxidizing inside your expensive suspension components. Something to think about, isn’t it?

Now that you have read some of the pros and cons of nitrogen and while it doesn’t seem too important for the general consumer, here is something that might sway your thoughts of whether nitrogen is worth the extra effort. While looking for information about nitrogen on the internet, I found a pro-nitrogen website that has a calculator that claims to determine how much money you will save over the course of a year in fuel and tire replacement costs. Go to www.getnitrogen.org and on the right hand side is the calculator that will change to Canadian measurements so you can enter metric numbers. I entered my info for my motorcycle and it told me I would save eighteen cents in fuel costs for the year (whoo-hoo) but it also claimed I could save almost $90 in tire costs. I’m sure it does its calculations for four tires so dividing that by two; I would save $45 a year in rubber. That’s a pretty significant saving for the minor inconvenience of looking for nitrogen in the first place. At the time of this article, I called around to about a dozen tire shops and found out that about half of them offered nitrogen and they charged on average $5.00 per tire, although Costco offered nitrogen at no charge.

Not all tires are created equal, but what they all have in common are those two tiny contact patches as opposed to being in a cage with four much larger contact patches. Now doesn’t it make sense to be a lot more careful with the rubber that may determine your health and safety?

Bottom line, regardless of what you use in your tires, it is most important to check the air pressure regularly to increase their life and to keep you safe. Considerable heat builds up from a tire without proper inflation and heat is a major threat to tire life and therefore your well-being in the event of a blowout due to low pressure. Luckily, everyone has the ability to top-up a slightly low tire. MMM

A quick fact from www.tiresafety.com:
Did you know that each month three out of four drivers wash their cars while only one out of seven correctly checks tire pressure? That’s only 15% of all car drivers.
Now be honest, are you one of the 15% who check your tires regularly? If not, it might be helpful to know that nitrogen’s larger molecules might take up to six times longer to lose the same amount of pressure that regular air takes to pass through a tire. That is no reason not to continue to check your tire pressure, but if you are one of the 15%, it may just help to increase your tire life and save you a few bucks a year in replacement costs.

A quick fact from www.tiresafety.com:
Did you know that each month three out of four drivers wash their cars while only one out of seven correctly checks tire pressure? That’s only 15% of all car drivers.Now be honest, are you one of the 15% who check your tires regularly? If not, it might be helpful to know that nitrogen’s larger molecules might take up to six times longer to lose the same amount of pressure that regular air takes to pass through a tire. That is no reason not to continue to check your tire pressure, but if you are one of the 15%, it may just help to increase your tire life and save you a few bucks a year in replacement costs.

Nitrogen isn’t just for breathing and tires. Possibly the most important use of nitrogen–other than breathing of course–is its use in the ‘widget’. I’m sure many of you know of the little plastic ball that floats in a can of Guinness and many other import ‘draft’ brands. That ball is officially known as a widget and uses… you guessed it, nitrogen. If it weren’t for nitrogen, we wouldn’t be quaffing quality import draft in a can!