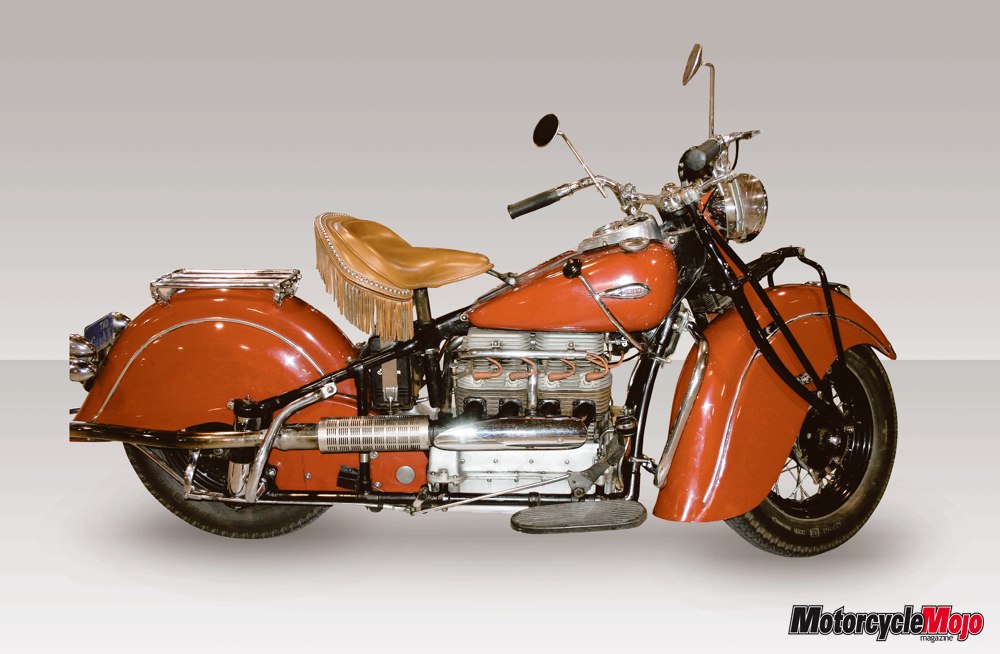 I don’t suppose that in 1935, when teenager Charlie Mahoney decided to buy a motorcycle, that he ever thought that it would make him a celebrity. That first bike, a 6 year-old 1929 Indian in-line four cylinder, bought simply for transportation, led to other motorcycles­­ – all Indians. Those bikes led to an involvement with the Indian motorcycling community that became so much a part of his life that when Charles W. Mahoney, “Iron Chief Charlie”, passed away in 2004, in his 85th year, there were thousands of Canadian motorcyclists who were saddened by the news. Tributes poured in from riders who had known him, but also from many who had never met him, and had simply read or heard about the “old guy in Campbellford who still rode an old Indian motorcycle.”

Over the past 25 years, the small informal summertime gathering of motorcyclists he started in 1984, and called “Charlie’s Indian Day,” has grown to become a substantial motorcycle and civic happening within the small Trent river town of Campbellford, Ontario where Charlie lived and operated a small engine and motorcycle retail business. The popularity of “Indian Day” in July at Campbellford made Charlie something of an icon in the eyes of many modern bike riders. Though they knew little or nothing of the long history of the Indian motorcycle, and probably less of the man, they seemed to realize when they saw Charlie with his treasured old Indian motorcycles that he was “a real biker”. The bikes were “really cool”. Little did they know.

Older, long-time Indian motorcycle riders who got to know Charlie before his more recent popularity, saw a different individual. Charlie Mahoney was an easy-going, sociable and not untypical small town Canadian – with one difference. He lived, breathed, worked, dreamed and slept for Indian motorcycles. But he was much more than a local motorcycle nut. Above all, he was a person who put people ahead of anything else – particularly if they were motorcyclists.

He was friend, advisor, sage, consultant and expert mechanic to many other Indian owners both in Canada and the USA for decades, helping the less mechanically inclined keep their old bikes on the road. If an engine or transmission from an Indian needed an overhaul or repair, Charlie could do it. If a rider needed advice on how to do his own repairs, he was generous with help and advice. But it was help and advice in a way that was different. Not the dogmatic “this is the way to fix it” statement, but an observation that a particular repair method had worked for him and might be worth a try.

The Indian Four motorcycle was a classic design, but not without its flaws. One of those was the foot clutch mechanism, which was never progressively smooth and even in its take-up. A number of motorcycle experts in the USA had tried over the years to improve its action but with little success. After an injury in a collision with a car, which was on the wrong side of the road, Charlie found his weakened leg gave him difficulty in operating the clutch. So he simply sat down and developed a different clutch plate material and design to solve the problem. His friend and fellow Indian Four rider, Bert McKie, once told me that Charlie was the only person who ever solved the Indian clutch problem but he was so modest about the accomplishment that only his friends ever found out.

To a younger generation of Indian enthusiasts, he was a mentor and a teacher. Perhaps teacher is the wrong word, for Charlie was never an instructor in the literal sense. He was more of a fellow inquirer, an asker of questions, a proposer of ideas and possible solutions, and a companion also seeking the revealed truth regarding the Indian motorcycle. And modest about his own skills and expertise, lest he discourage initiative in others.

While this sounds like a lot of serious philosophical meandering, it was not. It was just his way of asking his fellow Indian students to think, analyze, and then work to solve the problem at hand. He taught a level of patience and a kind of introspective thinking about mechanical problems that has all but disappeared from the science of mechanics. I can remember a long discussion with Charlie all of 35 years ago, not about Indians, but about the rather exotic problem of piston and ring scuffing in two-stroke air and water-cooled engines then being experienced by a major Ontario user of such. Charlie had been shown some of these engines when brought in for repair and, after careful thought, diagnosed the problem as poor lubrication oil quality. And despite the insistence of the big company’s own oil-testing laboratory that the oil they were using had passed all the required scientific tests, Charlie still maintained that the problem had to be poor quality oil. Eventually the company (who I happened to work for at the time) found that the oil they were being supplied with was not of the same quality as the oil their extensive testing had approved. Charlie simply commented, ”It had to be bad oil, nothing else would leave the inside of an engine looking like that.”

Greg Yerex of Port Dover considered that “Charlie was the ultimate Indian enthusiast, never too busy to talk, ride, work on Indian motorcycles and convey to all around the beauty and simplicity of their design and ease of maintenance. He always said that ‘the bikes had been good to him’.” Greg credits his 25 years of steady involvement with Indian motorcycles to the enthusiasm sparked by early contact with Charlie’s quiet enthusiasm.

Chris Simons, another Indian rider and known in Ontario motorcycling circles as the founder of “Friday the 13th,” also considered Charlie’s enthusiasm for motorcycling to be contagious. According to Chris, that enthusiasm for motorcycling was matched only by Charlie’s late wife, Jeanne. Their annual rides to Springfield, Massachusetts, the home of the original Indian factory for the “Come Home Rallies,” or to Florida and back for the Daytona races always saw them riding two-up on the Indian Four.

Jeanne was from Peterborough and Charlie courted her by riding from Campbellford on his Indian motorcycle. According to Charlie this was a dangerous thing to do at the time since Peterborough had an ordinance that forbade young ladies walking home at night to engage in conversations with men on motorcycles. Whether that town ever had such a by-law or not is doubtful, but it indicates that there was a humourous streak to his nature. He was fond of a practical joke or “leg-pull,” as it used to be called.

This sly humour surfaced when Charlie turned 80 and, according to Ontario law, had to take a driving license test. Handing in the completed test, he complained to the official that it was not the motorcycle test and that it was the motorcycle one he wanted to try. Nobody in the Campbellford license office had ever heard of an 80 year-old riding a motorcycle. Charlie insisted that he did not mind if they took away his car driver’s license (he probably drove a car less distance than he ever drove a motorcycle) but that he wanted to be examined on the motorcycle test. Finally the confused official in charge made an executive decision. “Hell, you ride a motorcycle all over town every day, anyway.” His license was appropriately renewed for motorcycles as well.

At one time his humorous stories were featured in a column in the local Campbellford Herald newspaper.

His small engine business in Campbellford was more than just a repair shop. Over the years it saw everything mechanical which needed repair and adjustment from local children’s bicycles to pioneer steam and gas farm antiques to lawnmowers, chain saws, Honda bikes (he was a dealer for them for a decade) and treasured Indian motorcycles.

The business was unique in that it was almost certainly the only motorcycle shop in Ontario at one time to have a wild skunk in residence. Charlie had it trained well enough to eat out of its own dish and to timidly hide under the shop when customers came. It shared his fondness for peanuts in the shell, as did a wild raccoon that took up residence, with meals, for a while after the skunk wandered away. Charlie’s attitude to such wildlife was that if they weren’t bothering him, he wouldn’t bother them.

Charlie’s shop at 204 Grand Road, in Campbellford remains to this day, the focus of Charlie’s Indian Day celebrations. This year the date is July 5th. Information on the event can be obtained by calling (705) 653-1561.

Charlie Mahoney was one of those characters, those individuals, who will long be remembered for their contributions to Canadian motorcycling, as was evident with his induction into the Canadian Motorcycle Hall of Fame in the fall of 2007. If the “motorcycles were good to me,” as he used to say, then Charlie was good to them and an inspiration to riders – of all makes – across the length and breadth of Canada.