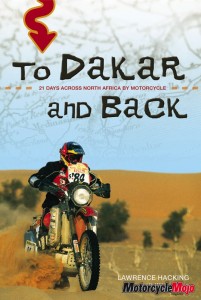 “The Paris-Dakar Rally is without question the most arduous and notorious off-road motorsports event on the planet,” said Lawrence Hacking, the first Canadian to finish the fabled Paris-Dakar Rally and author of ‘To Dakar and Back: 21 Days Across North Africa By Motorcycle’. Hacking is no stranger to the world’s toughest off-road courses. He has competed in Motocross races in North America and Europe, and competed in the International Six Days Enduro six times and medalled each time; no small feat in itself. He has also entered in the Beijing to Ulan Bataar International Rally across the Chinese Gobi Desert twice and won the 250cc class.

The Paris-Dakar rally has been in existence since 1979 and since its inception, Hacking has had his sights set on it. In that time, the Paris-Dakar has taken 34 lives and maimed countless others. In 2001, Hacking entered the fray as a privateer at the age of 46. The book describes in detail what is impossible to show on TV. The 10-months of full-time work involved to prepare for the event and the highs and lows involved even before the rally begins. Then there are the physical, psychological and mechanical demands of man and machine to withstand the gruelling punishment of below freezing temperatures at night and daytime temperatures that can exceed 49 C that the Sahara Desert brutally delivers.

Hacking describes the unparalleled human drama as, “The rally challenges one’s character more than anything else. It tests and evaluates who you are as a person. What the Dakar requires most is the acceptance that the ‘buck stops at you’, there are no valid excuses for non-performance. One must accept responsibility for one’s actions, period.”

For those who have ever wondered about the Dakar race or for those who watch it on TV, this book offers a riders perspective unavailable anywhere else in any other form. Follow along with Hacking on his 10,000 km, 21-day journey of mental and physical perseverance until he rides across the finish line on the beach of Dakar.

The 274-page book, co-written with motorsport journalist Wil De Clercq, including colour photos is available from Chapters for $17.95.