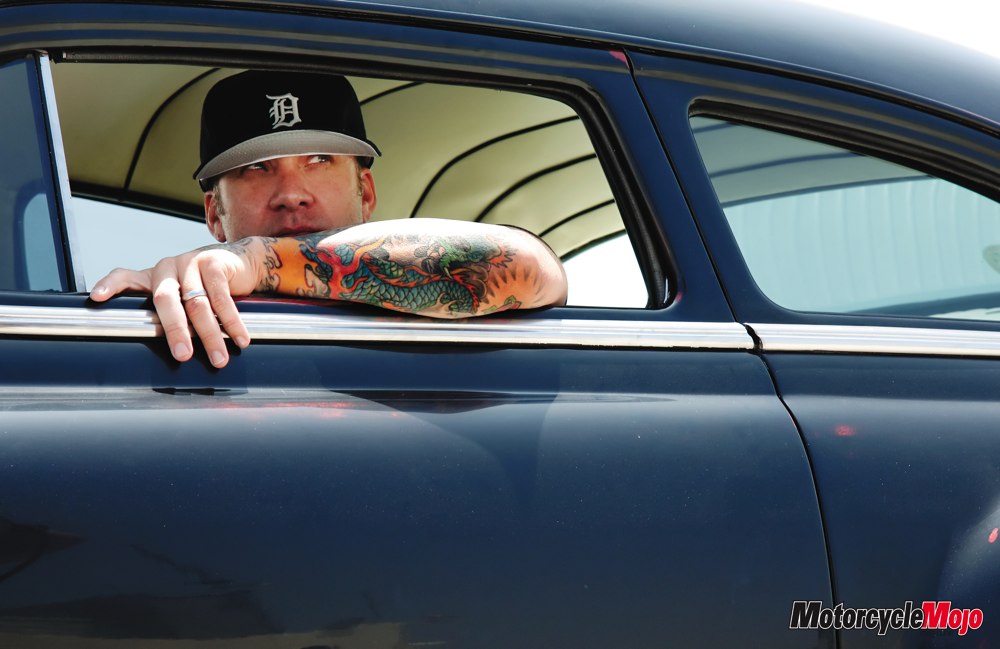 The King of Customs Motorcycle Show, being held in Calgary, Alberta during the May long weekend, will feature none other than builder extraordinaire, Jesse James. Unless you have been living under a rock or on another planet, you will know that Jesse’s biggest claim to fame is West Coast Choppers (WCC), although he is almost equally as well-known for his TV shows, Monster Garage and Motorcycle Mania.

Not surprisingly, he began taking things apart, modifying them and rebuilding at an early age. “As long as I can remember. I started with bicycles,” Jesse said. It all started in the seventh grade when he took a bicycle apart, customized it and sold it at a premium.

When asked about his influences he said he has so many, “Football coaches, fabricators like Lil’ John Buttera, mostly little guys that are amazing and never get the credit they deserve.” Even though Jesse didn’t mention it, he also worked for the late great Boyd Coddington and you’d be pretty hard pressed to convince me that he wasn’t an influence on the King of West Coast Choppers.

When asked about the WCC dynasty, his remark was, “It’s just a motorcycle shop, not the Lakers.” I think Jesse’s being a little modest. WCC has had a huge influence on kids and adults alike, Monster Garage and Motorcycle Mania TV shows, about 60 employees and 250,000 sq.ft. of working space at WCC, and the list goes on. I think if you asked the Lakers GM about the Lakers dynasty, he would probably reply with, “It’s just a basketball team, not West Coast Choppers.”

Jesse has been laying low for a while since Monster Garage has been on hiatus but said he is working on some new TV stuff as we speak. Although he didn’t elaborate, his website says that Pay Up Sucker Productions is currently filming a documentary called the History of the Chopper, as well as pushing the boundaries on some other projects. Jesse claims he’s a bike guy first but has a soft spot for cars and likes to dabble with both modes of transport. Trying to speculate what the ‘other projects’ are is impossible to say but I’m sure it will be as well done and as entertaining as his previous TV collaborations. The man has quite an imagination and possesses an enormous talent for manufacturing or modifying just about anything.

As for Garage Magazine, I personally liked the couple of issues that I’ve seen and being a magazine guy myself, I had to ask how much involvement he has in it. “I stay pretty hands off because my guys do such a great job. I give a lot of input as far as articles I want to do and things we should do features on, but my mug isn’t all over it like Oprah,” responded Jesse.

West Coast Choppers has built some the world’s most famous bikes. A couple of the most recent would be an identical pair of bikes for the Quentin Tarantino/Robert Rodriguez double feature movie, Grindhouse. Half of the double flick was a movie called Planet Terror in which the female character, Cherry Darling, rode the bike complete with a rocket launcher prosthesis leg. Nobody said it was believable, did they? “Those two bikes took about six weeks to build,” Jesse said. “While I worked with Rodriguez on the project, most of the design part came out of my head.”

Jesse says his most favourite bike is always the one he’s working on now, meaning any new bike he has his hands on is his favourite.

I just had to ask about his Aero Bike, a Jesse James built motorcycle boasting a seven-cylinder 172-cubic-inch (2818 cc) Rotec rotary engine. Hey, he made a car fly on Monster Garage, why not make a plane scoot down a highway. His Aero Bike has to be one of the most radical pieces of machinery ever constructed. He said, “I built it for a customer but it was very much a personal challenge. I just wanted to see if I could do it.” I couldn’t legally snag a photo of it but if you Google ‘Jesse James Aero Bike,’ you’ll see pictures of it.

If anyone has a pulse on his own industry, that being the Custom industry, I figured Jesse would so I asked him what his thoughts are on where the Custom Motorcycle movement is heading? His answer surprised me. “I think bikes are going to become about riding again. Not just built for TV, but stuff that people can really experience what a motorcycle is all about. Hauling ass to cool places,” Jesse said.

Even with economy the way it is south of the border and the production of Custom bikes slowing down, it’s still surprising to hear the King of Customs saying motorcycles will be heading back to their roots and once again become regular riders to haul ass to cool places. Hey wait a minute, isn’t that what all motorcycles do? I guess some just do it better than others.

Jesse won’t be the only builder in the house at the King of Customs show. Also in attendance will be some of Canada’s well-known builders. So far in attendance will be Kuhl Customs, Cycle Boyz, After Dark, Trick Factory, Precision Frameworx, Trillion Industries and Mad Jap to name a few, as well as tattoo artists, air brush artists, motorcycle dealers and lots more, including Motorcycle Mojo. See you there!

For up-to-date information, check out www.kingofcustoms.ca.