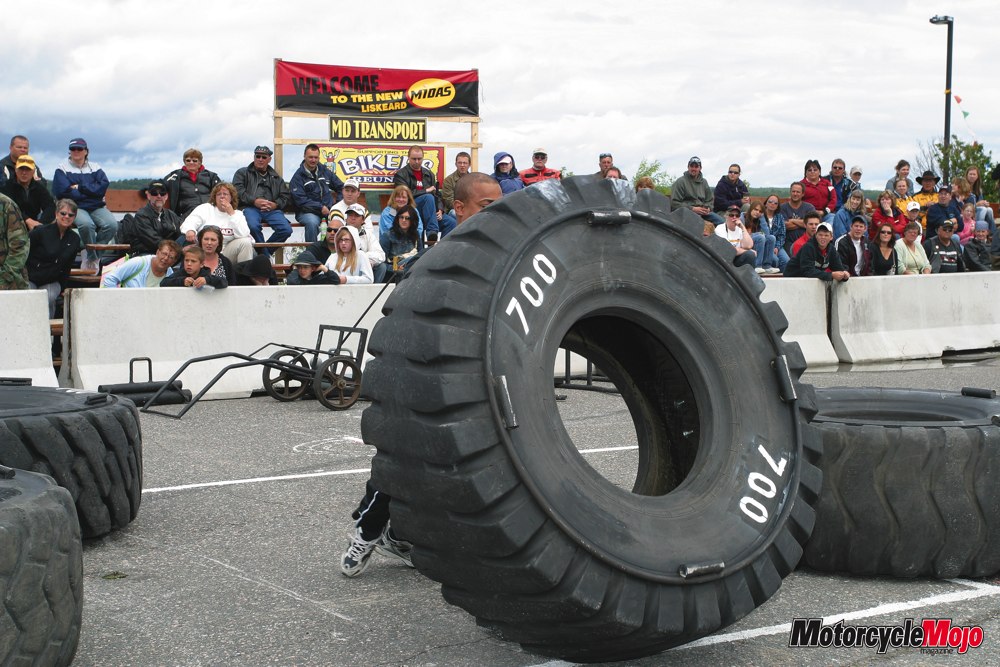 Outstanding is the first word that comes to mind describing The New Liskeard, Ontario Bikers Reunion. The motocross and free-style bikes, strongman competitions, vendors with motorcycle gear from A-Z, show and shine, western rodeo events, music and more, offers something for everyone. Add some of the most scenic winding Northern Ontario roads plus amazing motorcycle-friendly people and we’re talking a biker’s paradise.

Next, Community-spirit describes The Bikers Reunion that takes place each Canada Day weekend in New Liskeard. The 2007 event raised over $80,000—topping total funds for Temiskaming Hospital Community Care Centre, in excess of $250,000 over the past four years. Over 500 volunteers out of this small, close-knit community of 5,000—from school teams to karate classes, fireman, police, seniors and church groups, merchants and business owners—make the visiting motorcyclists feel welcome and ensure everyone has a good time.

Family is the bottom-line with The Bikers Reunion. It’s a motorcycle event on an international scale, that makes a clear effort to ensure toddlers to seniors, young and old, bikers and not, are equally comfortable and entertained. No, this isn’t a light-weight party—you don’t have time to even reflect on the absence of a burnout pit or wet t-shirt contest, because there’s just so much more going on. At the end of the day it’s all about having fun while fighting a disease that has affected all families.

For me, it began with the arrival of the first yellow Bikers Reunion sign at BikerTV HQ in the fall of 2006. Soon to follow was a myriad of emails, telephone calls and faxes. Then I started noticing yellow Bikers Reunion signs at bike shops and shows from coast-to-coast. The capper was when a transport truck delivered a massive crate of ‘Bikers Reunion Wants You! / Biker TV’ signage for our annual spring launch party. At that moment both BTV host Heather Ireland and I knew where we’d be on Canada Day weekend—meeting our new friend Barry Phippen, sign-maker extra-ordinaire and chairman of The Bikers Reunion.

It was a brisk, sunny, yet windy Thursday afternoon of Canada Day weekend 2007 on Highway 400 north. We knew we were in the north country after the sun dropped during the two-hour home-stretch from North Bay to New Liskeard on Hwy 11. There was thick, icy fog in the hollows, but we were guided in clearly by the ever-increasing frequency of The Bikers Reunion yellow signs.

Early Friday morning, the powerful dark, gray sky spoke rain, but the town of New Liskeard was in full-gear. The streets were closed to cars, but filled with people and motorcycles of every shape and size. Cruisers, sport bikes, customs and enduros with plates from many States and Provinces were rolling in from all directions. In the sea of riders, were large numbers of Yamaha Star Riders, Gold Wing and Valkyrie Clubs, plus Harley Owners Group members from chapters largely in Michigan and Ontario. Pins in a map of the world indicated visitors from as far away as Germany, Colombia and Britain as well as most states and provinces.

The scale and setup of the grounds was world-class centering around the ‘Refuge Palace,’ the biggest tent I’ve ever seen. The Refuge Palace was an area for campers to congregate if the weather turned fowl. Colourful vendor and food tents lined makeshift streets, with all roads leading to the campground dubbed ‘Tent City—You Won’t Find a Nicer Place to Rest Your Head,’ marked, of course, with a huge yellow sign. The waterfront location of ‘Tent City’ on the shores of Lake Temiskaming was stunning, although with the daunting clouds in the distance, the dark choppy waters looked mighty cold.

That afternoon, ten minutes into the Elk Lake ‘Early Bird Ride,’ I was stopped because of a torrential downpour. A few dozen hard-core riders led by members of the OPP Golden Helmets weathered on, including Heather who will never let us live that one down. I was thinking about the camera gear and I’m sticking to it.

Back to the waterfront, we finally met Barry Phippen, life-long buddy Marty Maille and many others of The Bikers Reunion organizing committee. They’ve taken the event a long way from the first year with one BBQ outside Barry’s shop to being one of Canada’s top motorcycle events drawing more than 20,000 people and 3,000 motorcycles. They work 7 days a week, 12 months of the year to make it all happen and have no intentions of slowing down.

“The answer to why we do this is simple, when you look around,” says soft-spoken, yet clearly determined Barry Phippen. “Young kids, grandparents and families all having a good time. It doesn’t get better than this.” I knew there was likely more to it, but that was good enough for now.

I just had to ask about all the yellow signs and just then the ‘The Fabulous Banner Boys’ entered; Barry’s dad, Bun Phippen at 82, and his side-kick Eric Campsall at a young 84. They drive a colourful ‘The Bikers Reunion’ pickup truck that claims ‘150 years of experience.’

“I’m the fifty—he’s the one hundred,” playfully jabs Bun.

The two men are the chief architects of the most impressive signage I’ve ever seen.

It’s really quite a powerful spectacle unto itself.

Of course, one can’t expect a straight answer out of these two ambitious pranksters, so I’m ready when I ask them why they work day and night for weeks setting up hundreds of signs.

“Would you say no to a ten-foot Heather Ireland,” chuckles Eric.

Sure it rained on and off throughout the weekend, but it didn’t dampen anyone’s spirits.

‘The Refuge Center—Big Top’ was constantly buzzing with great music, food and drinks. It was a spacious sanctuary to hundreds and just a few steps away from the colourful tents that filled ‘Tent City.’

At times vendor alley was a hectic and crowded place, but beaming with country values and charm. Locals and visitors alike were having a terrific time and the vibe was not only positive—it was electric. Rumour has it Elvis was even in the neighbourhood!

On hand was local girl, Trillium Muir—‘The World’s Fastest Woman.’ She grew up passionate about horses on her family farm just outside of New Liskeard. Now a Youth Correctional Officer in Sudbury, her interest turned to motorcycles in a big way and she recently set a world-record of 331.94 km/h. Energetic and fun loving, Trillium is quite an inspiration. “I tell many of the woman I work with that if a girl like me from a small town can set a world-record, there’s nothing they can’t do!” she says with a grin and giggle.

The Sunday highlight of the weekend is The Terry Phippen Memorial Ride. The ‘Eight Miles of Motorcycles’ was lead by Lise Grenier, veteran of the OPP Golden Helmets and a handful of her colleagues. “Rain or shine, this is what motorcycling is all about,” adds Officer Grenier. “Motorcyclists getting out riding for a great cause.”

Instead of a poker or dice run, the 3000 bike column travels through New Liskeard converging on Temiskaming Hospital where all the patients and nurses are given a rose and a gift bag. Beaming smiles radiate from staff, residents and bikers alike. It’s quite a sight.

Outside the front door, Barry Phippen is clearly moved. “We brought my brother here on the back of a bike, he died shortly after. My Mom passed away weeks later from cancer as well. Everyone here today is riding for someone like my bro.”

The Bikers Reunion Webmaster, Val Boal touched us all. After four years as a key volunteer, she was diagnosed with cancer in recent months. “It’s the roughest ride you’ll ever be on and you’ll never know until you’re there,” Val states emotionally. “It just doesn’t affect you, it hits your friends and family and every aspect of your life. I’d like to thank the Temiskaming Hospital and The Bikers Reunion for their generous help. This ride really does make a difference.” Sadly, after a tough, courageous battle, we’ll be riding for Val as well on future rides.

From the hospital we’re back on the winding northern roads along lakes, rivers and many open fields for 120 km through towns like Cobalt, Haileybury, Earlton and back to New Liskeard. Hundreds of people lined the highway waving at the bikes and many displaying signs welcoming and thanking bikers. The weather held and the day was about as good as it gets.

A terrific party followed with live music, food and the Grand Prize draw of a new Yamaha motorcycle donated by Yamaha Canada and its Northern Ontario dealers.The 2007 winner was Gord Wilson of Waverley, Ontario. Over Lake Temiskaming was the biggest fireworks display I’ve ever seen and a massive good old campfire closed the event on Sunday night. A fine long weekend for a fine cause.

It’s no surprise that The Bikers Reunion is growing to become one of Canada’s biggest biker events—it’s got the biggest heart. It’s one of the best-organized events anywhere and even better, the roads, scenery and people in Northern Ontario can’t be beat.

Be sure to mark June 27-30 on your calendar for The 2008 Bikers Reunion. For more information including maps and mileage charts go to www.bikersreunion.ca.