Many of you took your father’s car (or truck in my case) to the snow-covered mall parking lot and had fun doing donuts. You purposely lost traction at the rear wheel with too much throttle so the back end of the car swung wildly around. I think the modern term is drifting. You learned not to panic and simply steer into the skid to control the slide.

Our motorcycles are rear wheel driven as well. It is a little more intimidating power sliding the rear wheel of a big street bike. Four wheels are less likely to tip over. On bikes we have to contend with the dreaded ‘high side,’ a term used when the sliding rear wheel regains traction. The sideways momentum and sudden traction can pitch you up and over the high side of the bike. A low side is usually less painful since you simply slide out and the bike falls over with you on it. This is the practiced crash you see most often performed by stunt riders crashing in movies.

I have tested the theory of practicing what makes you crash, to prevent real crashes for years now. I am convinced it works. Let’s look at one kind of crash we have as riders.

We only have two palm-sized patches of rubber holding us to the road. That alone is a good argument to spending money on good tires, ensuring proper tire tread and pressure and not using a tire beautifying agent on the tread areas. Ninety percent of our riding is probably on dry roads. We don’t get enough practice riding on roads with less traction so we are not as good, or feel as comfortable, with gravel, sand or wet roads.

Here are a few tips that may work for you:

The most dangerous time is when it begins to rain. The rain mixes with the oil, antifreeze and exhaust pipe residue into a very slippery mess. Remember too that asphalt uses petroleum products in its composition and a light rain will bring out asphalt’s natural surface oil. Speeding up at the first rain shower to get home quickly may not work out well for you. It is better to pull off the road (coffee shops are best) to put your rain gear on. Please don’t stop under bridges where too many riders have been hit with their rain pants half way up. The police teach their officers to always dismount on the right side (away from traffic) for this reason.

• Once the rain has washed away the worst of the slippery ooze, get back on your way but increase your following distance. You won’t be able to stop as quickly or in as short of a distance on wet roads.

• Try and stay out of the centre of the lane where liquids dripping out of, or falling off of other vehicles has a tendency to collect. Traction is better in the tire tracks where other vehicles have dissipated some of the water. An exception may be some roads with heavy truck traffic. If there are noticeable truck tire indentations in the road the water can collect and cause you to hydroplane.

• Be very careful near painted lines. Leaning over or braking on them can cause a very quick loss of traction. Avoid abrupt throttle, clutch release and braking. To be safe in the rain you need to be very smooth with all controls.

• Knowing how to control a sliding rear wheel will help you if the tire ‘breaks loose’. Losing the back-end traction usually happens when we over brake with the rear brake or abruptly drop the clutch when down-shifting. If the back wheel steps out and you see a back fender passing you and you say, “hey that’s my bike,” then try to steer towards the slide. A common reaction is to panic and release the rear brake completely. That can allow the rear tire to regain traction as discussed earlier. The flying is kind of neat until you land.

Traction Loss With Sand or Gravel:

It is easy on a dry, sunny day to lose traction if you encounter sand or gravel on the paved road. The tire will slide around looking for the marginalized traction. Our panicked reaction is often to chop the throttle, white-knuckle the bars and go for brakes. None of those reactions work.

• Part of prevention is to anticipate where you might encounter sand or gravel on the pavement. Many parts of Canada are too cold in the winter for salt to melt ice. Regina for instance spreads lots of sand on the road. It takes time for crews to sweep up and collect what the spring rains don’t take off the road.

• You can also assume to see some gravel and sand on paved on-ramps in rural areas. The soft shoulder is just that—not paved. The poorly skilled car drivers who have two wheels on the pavement and two in the gravel shoulder drag gravel onto the on-ramp. If you are hauling at speed which requires more lean angle, then you might be surprised when the front-end slides out.

How to Ride Gravel Roads:

The greatest benefit to riding dirt bikes is to get comfortable with sand and gravel. Our instinctive reaction when we see the construction sign or when we turn onto the gravel cottage road is to slow down. Often our muscle memory from braking on pavement has us use the front brake as hard as we would on pavement. You can use the front brake on gravel and sand but you must be very careful not to overload the reduced traction. The road surface will now move around under the wheel and that can be very disconcerting if you are not used to it. Another bad reaction is to chop the throttle in gravel and sand. Think of your bike like a boat in the water. Keep the throttle on and the front end of your bike will ride higher on the gravel since your suspension is elongated (the front end is lighter with weight transfer onto the rear wheel). With the steering lighter, the front end will float left and right searching for traction on the moving road surface. Try not to fight it with a white-knuckle grip on the bars. Relax, hum some Bob Marley’s, “Don’t Worry ‘Bout A Thing.” Let the front wheel float, searching for traction. It won’t change lanes on you. If it is going basically west, provided that’s your desired direction, then relax and don’t fight it.

If you need to brake in gravel and sand, then use more rear brake and engine braking by using a downshift and a slow clutch release. You can use the front brake but be careful not to grab it. Never use it abruptly if you are leaned over or turning. A stopped front wheel will slide out very easily on gravel. I learned that many years ago when trying to stop at the end of a gravel road. I used a panic front brake grab to try and stop since there was a large German Sheppard named Butch locked onto my right foot making it hard to use the back brake. The bike slid out quickly onto the dog, he then raced off with my exhaust pipe branded onto his singed bum.

Now, didn’t I talk about practicing traction loss in order to avoid crashing when it happens to you? No, I haven’t been sniffing too much brake cleaner. It really works just like you borrowing your dad’s car in the snow. Borrow your dad’s dirt bike, or better yet, buy one for yourself. Dirt riding is all about getting and losing traction on purpose. Dirt riders with some experience have no trouble on street bikes on gravel. When the rear wheel steps out on a wet road or corner, the dirt bike riding experience kicks in. Practicing traction loss and how to then control it will prevent the panic and wrong instinctive moves to chop the throttle or jump on the brakes too hard.

If you can’t get your hands on a dirt bike, then at least do some aggressive rear wheel braking on your street bike. Don’t do it in traffic when being tailgated, you will fool them and kill you. Find a safe spot with no traffic, perhaps a quiet paved lot at a mall or a school. Starting at slow speeds with your weight forward, clutch in and steering in a straight-line, hammer the rear brake. The rear tire will skid. Ride it out. Don’t release the clutch or the rear brake. If it slides out to the right, then steer a little to the right. You will go through some rear tire rubber but the confidence and experience you gain will be well worth it. Practicing the same aggressive rear brake slides on gravel will more closely resemble braking on wet surfaces. There is less traction so be very careful. I received a nice thank you email from a nut whose chain snapped when he was going 140 km/h. The chain went through the engine case and locked up the rear wheel. He rode out the 300-foot skid without dropping the bike and attributed his skill to the rear brake skid in gravel lesson we recently had him practice on one of our dirt bikes.

I hope your 2008 riding season is a safe and fun one. I also hope that you don’t get to practice any real crashing. 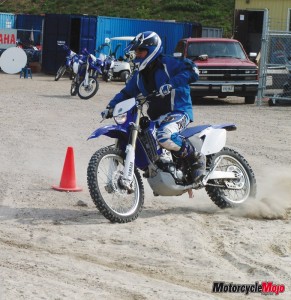