Narrated by Ewan McGregor, this high-speed documentary tells the story of Troy Bayliss’s rise from a car painter and part-time amateur road racer in Australia to one of the premier professional racers in the sport.

Details of Troy’s first ride when he was four years old, up through his early amateur dirt racing efforts are supplied in photos, home video footage and interviews with his family. Later his natural talent and aggressive ‘win it or bin it’ style is captured with awesome footage that follows him up through the ranks in British Superbike, AMA Superbike and on to championship success in World Superbike competition.

Troy’s Story is chock full of behind the scenes and race footage, including legendary battles between Troy on his Ducati and Colin Edwards on Honda for the 2001 and 2002 WSB champion-ships. This footage alone makes this DVD worth the price of admission. 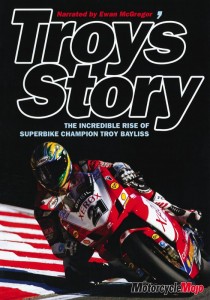