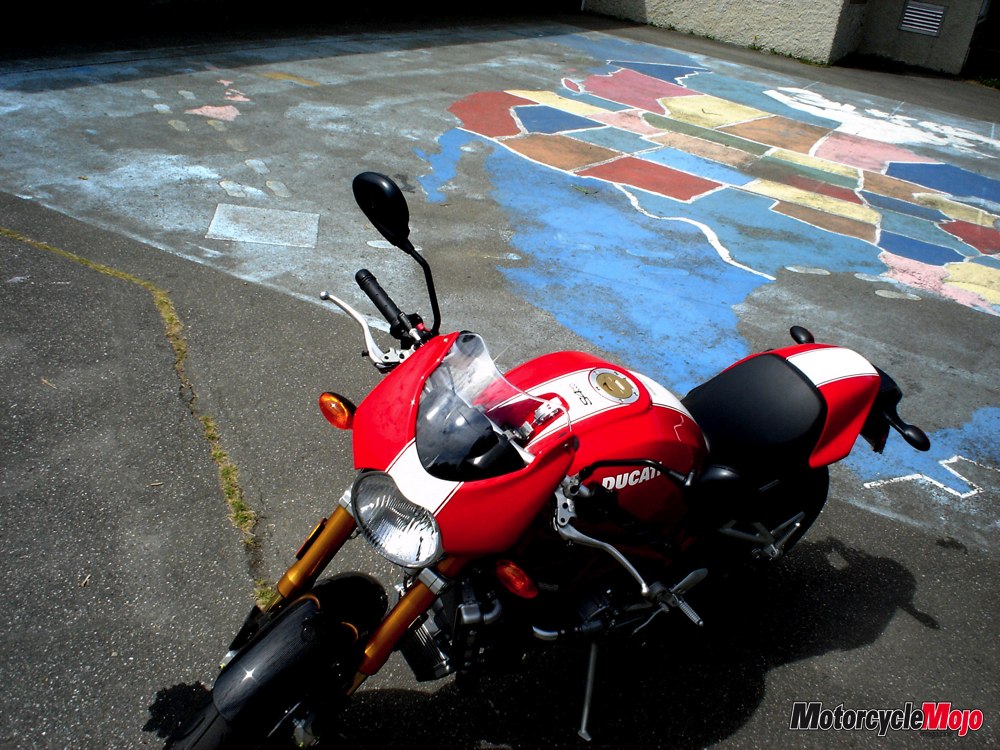 But then again, not every five-year-old has a mother who writes for motorcycle magazines.

A long time ago, I had a dream that my son would be riding with me on a long journey across the country, not unlike the main character in Robert Pirsig’s book, ‘Zen and the Art of Motorcycle Maintenance.’ So, when I brainstormed the idea that mommy and her motorcycle would be a good “show & tell” item for my son Gus’ kindergarten class, it not only registered in the whoa-that-would-be-cool category, but more in a deep subconscious way. My dream voice was already ahead of me manifesting a machine for the day.

I asked myself – wow, could the Ducati Monster be more perfect for a group of five-year-olds? Especially my son, a master in his world of monsters and superheroes, most of whom designed by his own creative genius molded with crazy superpowers and cosmic quirks – my personal favorite; a headless zombie horseman who stole brains from others only when he needed to think. What a riot! I knew he was going to freak out when he found out that mommy’s motorcycle was called Monster – fuel for the next series of ghostly ghouls.

Gearing up for the kids.

I wanted to make a good impression. And with that came the responsibility of representing myself as a safe motorcyclist. I was riding one of the fastest naked motorcycles in the world and it was up to me to showcase the respect I had for 130 horsepower by gearing up appropriately. It felt good – the boots, the armour, the leather, but I had to admit a bit surreal racing off to an elementary school.

So, here I was in the main playground right beside the basketball court – me, my motorcycle and twenty-five little rascals ogling my machine. Gus’ teacher, Mr. Bemister, introduced me as the guest speaker for today, and honestly I had to do everything in my power not to burst into laughter. I was a professional. I must show it.

I told the kids about my job as a motorcycle journalist, I showed them all the protective gear I was wearing including armour down my spine and then I asked them if they wanted to see the 998 cc MONSTER!

Of course, at this point the kids were all excited and following my lead. I explained that the motorcycle pipes were hot and NOT TO TOUCH the bike – adding at the last minute an excited inquiry “who wants to hear the growl of this MONSTER!” They all squealed and I revved the motorcycle louder and louder with a few flicks of the wrist. The best part, Mr. B offered all the kids ice cream. Perfect! Ice cream was here – never fear, this show and tell could do NO wrong.

Mr. Bemister later commented on the presentation, “It’s good for kids this age to see women doing things that they think men can only do. They were pretty stoked seeing the bike and especially watching you ride around the playground. When you have experiences and memory connections to something, you have a better chance of retaining that information and therefore a better chance to learn.”

Later, I asked Gus, “Did you like mommy’s show and tell?”

He calmly reflected on the day, “I liked the ice cream.”

I laughed out loud, “What about the MONSTER?”

“Yeah, I liked the monster sound. That was cool. Your armour was awesome. My friend Kai said you were good enough.”

Ah well, all I could do was just laugh and give Gus a tickle.

They got their ice cream, I got my Monster.

Special thanks to John Valk BMW Ducati for the bike.