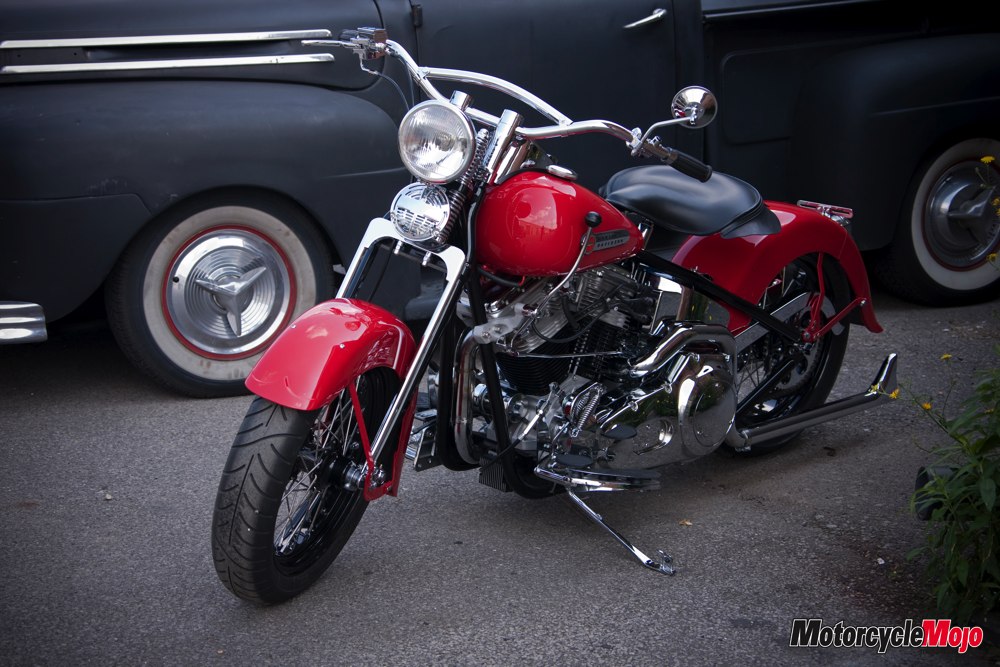 The bike’s owner, David Smye, had someone else begin this bike but it soon became evident that the final product wasn’t going to meet David’s vision of what he wanted. A vision David has had floating in his mind since his days of growing up in the fifties. David called Johnny Cool’s to arrange a preliminary meeting to see his vision could become reality. He met with Steady from Johnny Cool Choppers and while David knew what he wanted, he couldn’t really explain it.

This is where Steady’s 23 years of wrenching, expertise and a lifetime of ‘livin’ in the fifties’ come into play. Steady grew up with stock cars on the front lawn in various stages of repair and watched his father turn wrenches all his life. As a kid, he rode and maintained mini bikes, and then he got into motorcycles in a big way after leaving the military in the early eighties. Steady has never been away from motorcycles.

“David came to the shop and had a vision but he couldn’t quite explain it,” Steady said chuckling, “but I already knew what colour it was going to be. It was that smooth and we really hit it off.”

While David had been compiling parts that had been scattered around a few different places by this point, he initially brought Steady a frame, an engine, a springer front-end and a rear fender that had been modified, but wouldn’t fit the supplied frame. After about a month, all the parts were collected and Steady began sifting through them to see what was usable.

The history of the engine was unknown so Steady disassembled it to inspect the internal condition and found it to have some high-end performance parts installed. It turns out the engine has some race history and has some pretty trick internals. “It was an early Evo-style engine and a real hot-rod. We later found out that a local dealership mechanic built this engine and it had all the right pieces. The engine was in a bike that drag raced and the rider used a jockey shift.” Steady said. “It had an S&S bottom end, 4 1/4 inch stroke, a Sputhe 95-inch big-bore piston and barrel kit, and STD double plug heads that were flowed by Donny Morris at ‘Stay Tuned’.” Steady called Alan Sputhe, a man Steady thinks of as a genius in the engine design and building arena, in order to ask questions and order special Sputhe parts.

The design of the bike would be based on a 1948 Panhead, therefore Steady installed Panhead rocker covers, a Panhead generator cover in place of the nose cone, which now houses the oil filter instead of the generator. He cut the mounting tabs off of the gas tanks to lower them as would have been done to ‘bobbers’ in the forties and fifties. Being true to the ‘48, Steady mounted Hollywood bars, the horn out front and modified the rear hinged-fender to fit the frame and the 200-series tire that David wanted. Steady even took the time and great care to ensure the radiuses of the fenders were true to the original. He also had to re-lace and true the wheels since they weren’t done right when they arrived at the shop.

David’s vision had a heel/toe clutch that is period to the fifties and Steady fabricated the tank style shifter to replicate the Police shifters of the late sixties to late seventies. Steady also made the ‘true-dual’ exhaust. While the original wouldn’t have had electric start as this one does, a fully functional kick-start was mounted to the 5-speed transmission for added authenticity.

When it was time to discuss colour, Steady wasn’t kidding when he said, ‘I already knew what colour it was going to be.’ The colour would be gloss black wheels, gloss black frame and bright red body panels with the classic ‘48 tank badge.

“Steady, I like it around here. You like the fifties, but I lived them.” David once commented to Steady while hanging around the shop. A comment that Steady is proud of.

Whether you liked ‘em or lived ‘em, you have to agree that this bike is timeless and the design is from an era that produced bikes you can never get tired of looking at. MMM

It’s always busy here at Johnny Cool Choppers but every once in a while a customer will walk in the shop and “Restore our Faith” that there’s still some “Cool Cats” who believe in the same era that we base our values & ideas from.

I would like to thank David for allowing us to build his ideal motorcycle. 50’s Forever!