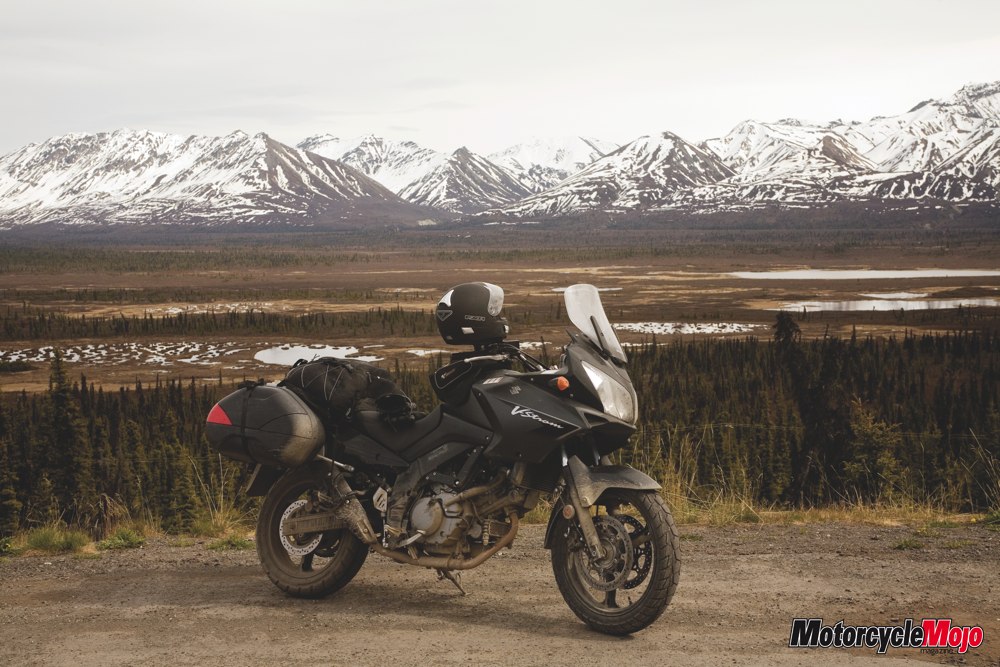 They say history always repeats itself and it seems there is a trend that is going back to the general-purpose, all-around motorcycle. The benefit is that the technology that had spawned a huge number of specialized categories is making its way back to this general-purpose style of bike and that’s great news. This breed of motorcycle isn’t made for one particular function, other than to have fun of course, but can handle pretty much anything you can throw at it, and it handles it all very well.

The Suzuki V-Strom is one such bike, whether it’s the 1000 cc or the 650 cc model. The V-Strom has proven itself for many years now as an impressive bike that does everything very well.

I had the pleasure of riding one for two weeks in northern BC, Yukon and Alaska. During that time I put the 650 V-Strom through its paces on rough frost heaved and potholed roads, smooth highway, both dry and muddy, loose and hard-packed gravel, wound it out on roads that were straight as arrows and carved more corners than you could shake a stick at in the mountains.

While the bike has been on the market for a number of years and although the 650 now comes standard with ABS, it has under gone very few changes, in other words they nailed it the first time round. Many years ago I had read reviews of the 650 V-Strom and while I don’t necessarily remember the details of those reviews, I do remember that they all said the bike was very competent in all aspects. This is a common remark I also hear from V-Strom riders.

When I picked up the bike, my first impression of the V-Strom was the comfortable seating position. The handlebars are an easy comfortable reach and the foot peg position feels natural below the thighs, the 820 mm (32.3 in) high seat is wide enough for some movement with good support. So far it seemed like the perfect seating position for comfort and long distance travel, as well as offering a good sense of control and balance. First impressions can go a long way, but the true test will be 15-days in the saddle. Time will tell.

Cruising around and immediately getting lost after riding the bike out of the parking lot at Riverside Yamaha Suzuki KTM in the Edmonton suburb of St. Albert, Alberta, proved instantly to me that the bike is a lot of fun to toss around and was easy to handle in confined spaces and slow speeds. The bike had good manners in traffic and feet up U-turns were a breeze. I sat tall enough in the saddle which made it easy to see traffic all around me. The easy to use power from the engine made taking off from traffic lights effortless, leaving all other forms of transport way behind. Stopping power was also easy to get used to in the city.

After our first day on the road to adventure I knew this would be an ideal bike for the trip. The liquid-cooled 645 cc 90-degree V-Twin DOHC engine delivered a surprising amount of power on my loaded home on two wheels for a couple of weeks. Negating the need for a choke, the electronic fuel-injected system feeds 4-valves per cylinder and although we had some cold mornings, the engine never hesitated to spring to life and run perfectly.

Once underway, the bulletproof engine, which has proven itself since its introduction in the 1999 SV650, pulls the bike and rider up to desired speed, surprisingly quickly and smoothly. I felt no vibration anywhere in the rev range and vision through the mirrors was always clear. The engine seemed to love the 5000-6000 rpm range and could run there all day long, which in many cases it did. In sixth gear at 100 km/h the engine spins at 4,500 rpm and passing a slower vehicle at that speed was easy, but a quick downshift makes for easy work of the pass and leaves the slower vehicle just a memory in your mirrors.

The six-speed gearbox shifted effortlessly and finding neutral was consistently easy. Final drive to the rear wheel is via chain. The cable-operated clutch doesn’t have an adjustable lever but I think it should be an easy reach for most hand sizes, and the lever pull won’t cramp your hand up if stuck in traffic. Friction point was half way in the lever travel just where I like it, but that is somewhat adjustable by the large easy-to-turn adjustor at the lever end of the cable.

Traffic scoots along at a pretty good pace on the roads in the northwestern regions of Canada and Alaska and the descent-sized windshield at its lowest setting did throw a fair bit of wind in my face and some helmet buffeting was noticeable, but the windshield can be manually adjusted for height very easily. The windshield adjustment took place on the side of the road with just a hex key and a screwdriver, and only took minutes to complete. That made all the difference in the world and directed the windblast over my helmet.

Because of the speeds we were travelling, it’s hard to get an accurate figure for fuel mileage, but I averaged 5.63L/100 km (55.7 mpg) and my best single mileage calculation was 4.49 L/100 km (63 mpg). Based on those numbers, a theoretical range for the 22-litre tank would be 392 – 488 km. Very impressive distances and economy considering today’s outrageous fuel prices. If we maintained normal highway speeds, those numbers should be even more impressive. The engine also utilizes dual spark plugs per cylinder to ensure complete combustion and for emissions reasons.

The suspension provided a very compliant ride regardless of the road surface. The 43 mm front fork offers preload adjustment and the single rear coil-over-shock provides adjustable rebound damping and an easy to get at knob for adjusting spring preload. Some of the roads were quite rough but the 650 V-Strom, weighing in with a dry weight of 194 kg (427 lb), plus a full array of gear and rider, easily handled everything that was thrown at it, never bottoming out. Both the front and rear suspension gives up a whopping 150 mm (5.9 in) of travel. If you happen to get into some really rough stuff, the generous 165 mm (6.5 in) of ground clearance ensures that you probably won’t be bottoming out the frame. With that kind of suspension travel and ground clearance, if you bottom out, you might want to make a change to different terrain.

While we are on the subject of handling, you couldn’t compare the handling of the V-Strom to a repli-racer by any means, but the V-Strom was great fun and can certainly hold its own in the twisty sections. The wide bars required just a light push for the V-Strom to bank into a corner and hold a perfect line. Never once did I feel uneasy while banked over in a corner. The bike also felt rock steady while at high speed on the straight sections of pavement.

The large diameter 19-inch hoop up front made pretty short work of the loose gravel and mud we encountered in the construction areas, while the 17-inch rear just followed cleanly behind and provided plenty of traction to power through the tough spots.

Stopping the bike is easy with a light pull on the adjustable front brake lever. At the other end of the front brake line is a pair of twin-piston calipers squeezing substantial 310 mm discs while a 260 mm rotor and a single-piston caliper covers the rear’s stopping chores. The 2008 650 V-Strom comes standard with ABS and while this can be a huge benefit most of the time, sometimes it would be nice to be able to turn it off, especially in the gravel when you can have more fun with the rear brake. Regardless, the ABS system worked as expected when trying it out in a parking lot. Thankfully I didn’t have to use it in an emergency situation.

The large analogue speedometer and tachometer sit just below the windscreen making them easy to see. Between the gauges is an LCD that provides fuel and coolant temperature read-outs including low-fuel warning, clock and odometer with two trip meters as well as the traditional oil, neutral and high beam indicators My demo had hard side bags installed that I am told came from Suzuki and while they didn’t have a name on them, only the word ‘Soft’ on the key, they mounted on what looked standard Givi brackets. I never did trust the closing latch mechanism, as there was no positive latch to ensure the bags were closed properly. I just had to listen for a faint click and then pull on the outer half to make sure it wouldn’t open. There are other side bags available for the V-Strom including the Givi brand that does have a positive locking mechanism.

There is a selection of basic factory accessories for the V-Strom but over the years the bike has acquired an almost cult-like status, and because of its functionality and the belief that this model will be around for many years to come, there is also a large selection of functional aftermarket parts available as well. With this dedicated following, internet chat rooms, user groups and forums are an easy way to find or gather information, or just mingle with like minded riders.

A salesman at Riverside said to me, “When you no longer have a need for the race qualities of a sport bike, or you are over the coolness factor of a blinged-out cruiser, then the V-Strom is the perfect bike.” I couldn’t agree more.

This bike did every-thing I could ask for in a bike and more, and it did it very gracefully. Dirt, mud, potholes, high-speed straights, corners; it handled everything very, very well in the 7,000 km I put on it.

I saw quite a few V-Stroms during my travels to Alaska because it easily handles a variety of terrain and has excellent long distance touring capabilities. It surprises me that I don’t see more of them on a day-to-day basis on the streets. They have to easily be one of the best buys on the market at only $8,999 for an excellent all-round type of motorcycle.

Welcome to the world of the efficient and modern multi-talented motorcycle.

For more information, see your dealer or go to www.suzuki.ca.