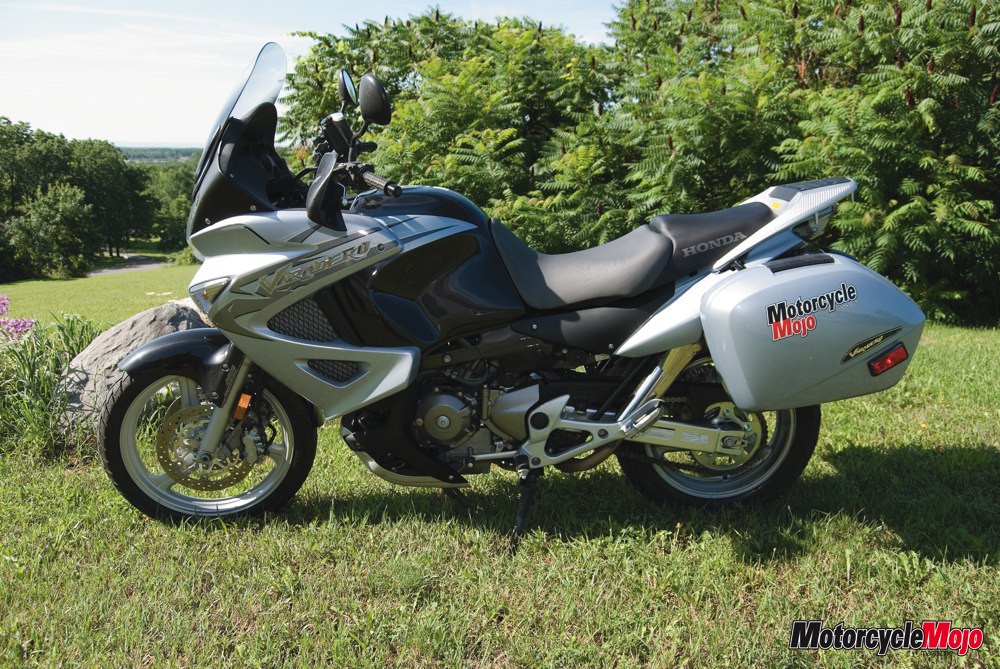 We asked Honda Canada if we could test ride the new ’08 Varadero and this is how the conversation sort of went:

MMM: We would like to road test your new Honda Varadero.
Honda Canada: “Sure, how long do you need it for?”
MMM: “Umm, thirty days and we’ll probably put some serious klicks on the clock.”
Honda Canada: “How serious?”
MMM: “Around 17, maybe 18,000 klicks, no big deal, just up to the Arctic Circle and back.”

Honda Canada: “No kidding, that’s got to be the longest test on any bike we’ve ever had… Sure. Pick it up next week.”

And that was that.

Bonding with the new Honda Varadero: 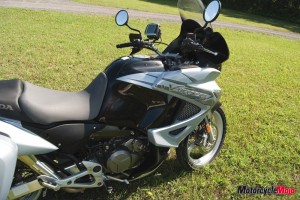 The Varadero is not a new model in the Honda line-up as it has enjoyed a well-earned reputation in Europe since 1999, but it is brand new to North America and to be more specific, Canada only. The Varadero appears to be Honda’s Canadian move into the Adventure Riding market, however, somewhere along the line someone hit the ‘just right button’ as the Varadero serves as a great platform for just about any kind of riding you want to do. Commute, long haul or flat-out adventure; this bike fits the big picture. After 18,000-plus kilometres of just about every possible road surface, it was really hard for us to say goodbye to the Varadero and send it back to Honda Canada.

The power component is a very capable 996 cc electronic fuel injected, liquid cooled, 90-degree V-Twin engine sporting a chain-driven DOHC and 4-valves per cylinder. While Honda Canada has not posted official horsepower or torque figures, European reports claim 95 hp and 72 ft/lb of torque. Power from the engine is refined through a slick shifting six-speed ‘smooth as silk’ transmission. To put all that torque on the road, an 0-ring sealed final chain drive turns a 17 inch aluminum rear wheel with 145 mm (5.7 in) of suspension travel, while up front a 19” aluminum wheel boasting 155 mm (6.1 in) of travel handles the nasty stuff with ease. The power is supple enough to be absolutely predictable, there are no surprises in either turning the tap on or off with this sweetheart.

Stopping the Varadero is equally predictable as a full ABS combined braking system sporting dual front 296 mm discs with triple-piston calipers and a single rear 256 mm disc with a triple-piston caliper hauled things down real quick. The only change I’d like to see made available would be the ability to turn the ABS system off for those times when you find yourself in a true ‘adventure alley’. 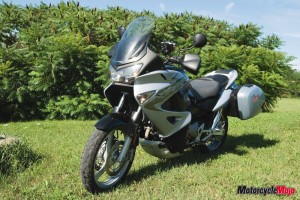 The Varadero liked to be fed well, but some considerations must be made here as fuel consumption was based on a continuous heavy load— approximately 40 kg shy of maximum weight capacity, some spirited riding and wind conditions that were close to head on for the majority of the test. When it all wrapped up the average consumption was 5.8 L/100 km (48.7 mpg). With a standard 25-litre capacity of regular (87) fuel, that equals 431 km to bone dry, which is good for just about any long haul route. The fuel light on our machine flashed on with about 60 kilometres of reserve at reasonable speeds, which allows you some breathing room. The Varadero does not rely on a typical gas gauge, but rather counts down kilometres to reserve. I suppose that once you get used to that method it would work well, but I still prefer a quick glance at a fuel gauge as a reminder.

Ergonomics are very well thought out with a spacious contoured saddle and positioning that allows you to take a great deal of abuse without being abused. Wind protection is something that needs some work if you plan a long haul in poor weather. In my opinion the windshield is more of a fly screen than a true windshield and does not offer the rider much protection. An inch or two taller with forward directional roll on the windshield tip to deflect water may add a ton of comfort when Mother Nature decides to be moody.

Mirrors offer excellent vibration free rear vision as the power plant is so well balanced that vibes are next to nil. Mirror positioning could be improved, as their front profile tends to draft air onto the top of the rider’s hands. Without optional bar heaters I found this uncomfortable, again consideration must be given to the fact that weather conditions on the test ride ranged from one day high of 33 C followed by twenty-some odd days of 3 C – 12 C, which is a pretty cool swing.

Riding the Varadero is simply a dream. Although it’s no lightweight at 276.7 kg (610 pounds) with a full tank of fuel and ready to ride, it feels lighter than it actually is and offers both confidence and forgiveness under severe duress. From a tight one lane U-turn to apex-hidden sinkholes, the Varadero’s design simply worked beautifully time after time. The single rear shock offers adjustable spring preload and rebound damping, allowing you to fine-tune to your load and to the road surface. Keep in mind that the Varadero is a fairly tall bike with a seat height of 838 mm (33 in) so a lofty in-seam is required to plant both feet flat on terra firma.

Heat transfer from the front lower fairing cooling radiators to the rider’s legs was minimal, even in +33 C temperatures. One nice touch in the radiator’s design is that it’s built on a tight angle inside the fairing so rocks and other debris doesn’t get a ‘head on chance’ to puncture the assembly, and goop simply piles up inside the radiator housing corner, allowing for a quick wash-out. The near-silent radiator fans only came on when idling during a long ‘hot’ construction stop.

A huge plus for the Varadero is its exceptional lighting. At 100 km/h you are not overdriving low beam headlight abilities and still casting enough ditch-light to illuminate eye reflections. High beams were the next best thing to daylight and level can be adjusted according to load.

The optional luggage (panniers) are secure, detachable, side-opening and deceptively cavernous. After twenty-six days of rain, rocks, mud and dirt they were bone dry and dust free; a fine place to store your good tuxedo.

At a manufacturer’s suggested retail price of $13,999, the Varadero will be a serious contender in the adventure market. Two optional items I wouldn’t hesitate to buy would be heated hand grips and a centre stand because the Varadero begs to be used to its potential and when you do, the tires will one day need a roadside fix. A centre stand just makes that job a breeze.

Across Canada the Varadero received an amazing reception by riders and from that I can picture quite a few Americans making the trip north to buy one, and for me, I kind of like that idea. MMM

Thanks to Honda Canada for a sweet ride. I don’t suppose I could ‘borrow’ it again?

For more information on the 2008 Honda Varadero visit: www.honda.ca