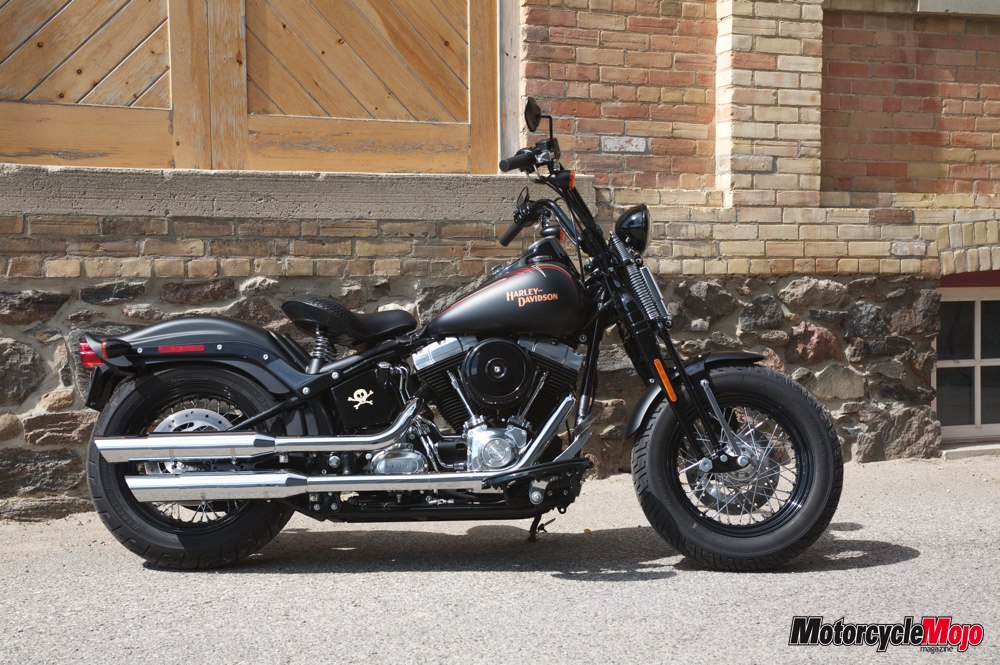 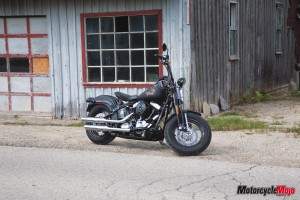 The Cross Bones takes you back to another time, another place; when motorcycles were minimalistic and meant only to carry you from point A to point B. A time when life seemed to stand still if judged by today’s standards; a time without cell phones, internet or GPS.

It seems to exude a retro way of life and once you take a seat you’ll know exactly what I mean. In the days that I had the 2009 Cross Bones in my possession, I took a step back, slowed down and simply enjoyed the ride. I realized this total feeling of calmness within the first 30 km that I put on the bike. This bike demands it, perhaps it’s because of its retro style, sprung solo seat and retro floorboards and brake pedal, or could it be the ape-hanger handlebar, Springer front-end and wide tires.

I should make note that the only difference between the 2008 Cross Bones and the 2009 version is the white skull on the right side of the oil tank. Lance Onan, Platform Marketing Director at the Motor Company’s head office told me, Willie G was directly part of the design team on the Cross Bones and someone had put this skull on the oil tank of the prototypes. Willie didn’t want it on so it was removed before production began. A number of people had seen the skull on the prototypes and complained when it didn’t appear in production. There was no time to test the paint against the heat of the oil tank so it didn’t make it on the 08 model but it’s now on the 09 version.

The Cross Bones was announced almost a year ago as the fog lifted from these shadowy characters in a six-model segment defined as the Dark Customs. The sinister line-up share models from other platforms and joining the Cross Bones is the Nightster, Night Rod Special, Street Bob, Night Train and the Fat Bob. 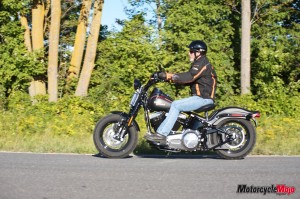 While the Cross Bones uses the same frame and driveline as other Softail models, with the exception of slightly varying rake dimensions in the Softail line, that’s where the similarities end. It has a look as if it came straight from the post-WWII era of bobbed fenders and stripped-off parts. The half moon floorboards are accented by a round brake pedal that looks as if it was lifted directly from a ’49 Ford pickup truck. Blacked-out Springer front-end, wheels and drive line, sprung solo seat, bobbed rear fender, ape-hanger handlebar, cat’s-eye style dash and the obvious lack of chrome make this the epitome of a factory produced old school bike to the nth degree. While this bike is modern in all aspects with the exception of its style and character, there is an interesting part number used on the Cross Bones. According to Lance Onan, The seat pan is actually a 1930’s part number. The design has been updated over the years and was in use on police bikes, but it still uses the original part number.

First noticeable is your body position while riding, very high and upright. Arms straight out at chest height, feet sit flat on half-moon vintage-looking floorboards, your legs only slightly bent while you sit on the wide suspended spring seat. As different as it feels, it is a surprisingly comfortable seating position for back road touring or city street cruising. In order to accommodate different leg lengths, the very comfortable solo seat is adjustable fore and aft 2.5 cm (1 in). The tall-in-the-saddle seating position does however leave you completely susceptible to a good pummeling from the wind at higher speeds. With a laden seat height of a respectable 67.63 cm (26.6 in), and having next to nothing in front of you with the exception of the black ape-hanger bars, you are left wide open. While the Cross Bones is great cruising the countryside or tearing up a boulevard, the highway can take a toll on your upper body. Even though the Cross Bones looks and feels great at a slower pace, it does offer your upper body as somewhat of a parachute. Be sure to do your coat up all the way or it quickly fills with air, making you look like a close cousin to the Michelin Man.

The view from the seat is classic early Harley-Davidson. The small black headlight pot and a pair of springs from the minimalist Springer front-end leave next-to-nothing in your way of a clean view of the road. Don’t let the size of the headlight pot fool you. The low beam lights up the ditches, not to mention the road ahead, while the high beam does a good job of trying to re-create daylight. I was surprised that so much light could be emitted from such a small headlight.

Also in plain view with a tilt of your head are the speedo and the LCD red-out on the cat’s-eye dash that offers a pair of trip meters, clock, odometer and a mileage distance to empty counter while the left gas cap provides a clean view of the fuel gauge.

The Springer front-end does an admirable job of soaking up the bumps. Small road imperfections are more noticeable than telescopic forks, but although the Springer only gives up 9.65 cm (3.8 in) of travel, it does soak up bigger bumps with ease. The suspension in the rear, while based on the proven Softail design, is possibly the plushest ride you may have ever had. Not only does the Cross Bones have full rear suspension, the sprung solo seat helps to eliminate any offending road imperfections in the rear. A very cushy ride regardless of road surface.

Handling around the tightest corners at speed doesn’t seem to be an issue. The initial look of the bike and the seating position does nothing to make you think that this 334.3 kg (737 lb) bike can handle the twisties, but with arms out front on the wide handlebar, plenty of leverage is offered. A steering head rake of 32.5 degrees but a fork angle of only 24.2 degrees makes for an easy and effortless turn-in. Sitting mid-bike also provides a neutral centre of gravity and proper positioning for good control on the slow turns as well. The black wheels and hubs, tied together with steel laced spokes, hold wide tires, 130/90 up front and 200/55 pulling up the rear. Even with rubber of that size, they do not seem to inhibit cornering.

The tall, wide handlebar also offers greater than normal leverage making the bike a breeze to lift off the side stand, even if the bike is leaning more than usual.

A single piston caliper up front and a two-piston rear squeezes 292 mm (11.5 in) rotors on both ends. The front requires a firm squeeze, just as the back needs a firm foot to slow individually, but together they make a good team and slow the bike down quickly.

The power delivery is typical Harley-Davidson, strong and smooth down-low torque. A twist of the wrist produces a clean getaway at most RPMs above idle. Mated to a smooth shifting 6-speed Cruise Drive transmission, power delivery to the rear wheel seems effortless. The transmission offers a loud thunk going into first gear from neutral but it isn’t out of the ordinary for a Harley, and not loud enough to cause concern, you just know it is in gear. Shifting thereafter is considerably quieter, smooth and precise with little effort on the heel-toe shift lever. The clutch lever is the easiest to pull that I have ever experienced on a Harley and shouldn’t be cause for concern in stop-and-go traffic.

Passing a vehicle on the highway, even in sixth gear, is no problem as the Electronic Sequential Port Fuel Injected air-cooled 96 ci (1584 cc) V-Twin engine dishes out a maximum of 87.9 ft lbs of torque at only 2750 rpm.

While the handlebar, mirrors and floorboards were all vibration free, the seat did pass through a slight amount of vibration, but only on acceleration.

While there is a pleasing sound emanating from the mufflers, the exhaust note is more muted than I would like. I am not a proponent of straight pipes by any means, but I do like to hear a rich exhaust note from a big V-Twin engine to serve as a reminder that I am not riding an appliance. A bike like this is a re-creation from an important piece of American motorcycle history and being able to hear the exhaust a little more would seem to suit it, and help it fit into that hardcore old school post-war era.

From the abbreviated front fender, to the skull on the oil tank, to the black rim holding the 200 mm piece of rubber out back, this bike oozes character that demands a lot of attention from bystanders and many eyes would follow it as it rolled down the road, wondering just how old this modern motorcycle really is. I didn’t stop long enough for a public question and answer period, preferring to just sit back for a comfortable easy going ride and enjoy the scenery roll by, ignoring my vibrating cell phone.

The Cross Bones comes in Vivid Black, Dark Blue Pearl, Black Denim or Pewter Denim, and of course, all offer the classic Von Dutch style pinstriping. Base price starts at $18,719 for Black or $19,099. for colour.

For more info go to www.harley-davidson.com