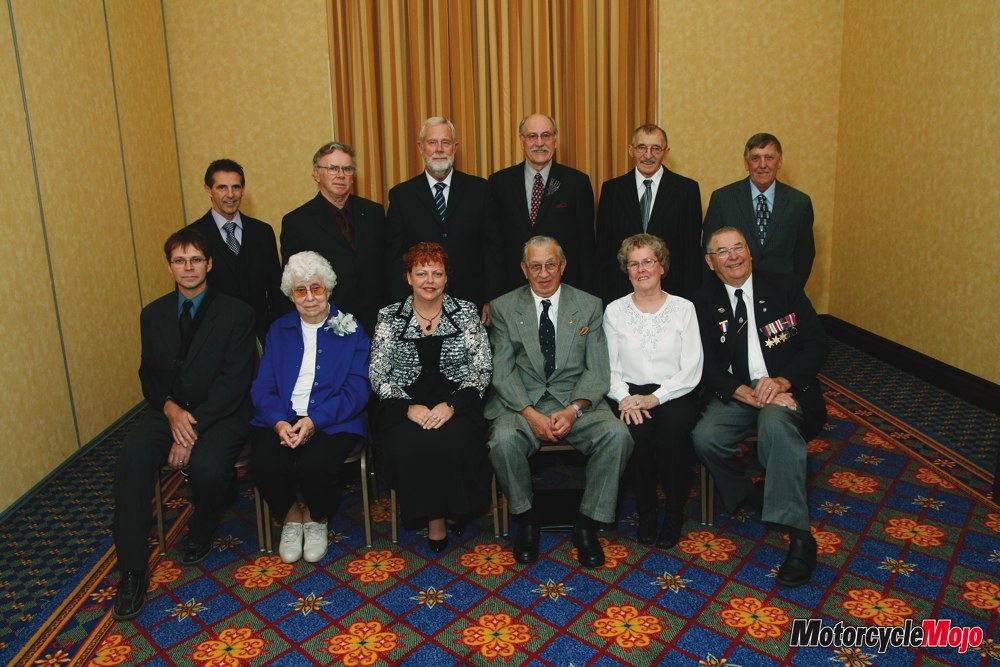 Ten people and two groups were inducted to the Canadian Motorcycle Hall of Fame during the third annual induction banquet held in Toronto on October 25, 2008.

These brief descriptions of the accomplishments that these men and women made to the Canadian motorcycle scene are abbreviated to show some of their highlights.

Each inductee, or their representative, were called up on stage for a few words about their past and the ensuing stories ranged from humourous to thoughtful; to touching words of remembrance in some cases.

The fully stocked silent auction raised some much-needed funds for the Hall of Fame.

After the awards ceremonies, Bar Hodgson, at age 70, recounted his experience racing the Supershow sponsored Team Arrow Streamliner at the Bonneville Salt Flats this year and his subsequent crash at just under 180 mph. The streamliner skipped along the salt for more than a half mile and rolled an estimated 19 times before finally coming to a stop.

Lawrence Hacking then spoke of his seven-day rally on the Japanese island of Shikoku, the spectacular scenery and wonderful people of the island.

Lawrence, who in 2001 became the first Canadian to ever finish the grueling Paris-Dakar race. Lawrence released a book in early 2008 of his Paris-Dakar race called, ‘To Dakar and Back. 21 Days Across North Africa by Motorcycle’.

The following are the ten individuals and two groups inducted into the Canadian Motorcycle Hall of Fame.

Audrey began riding in 1946 on her 1942 Harley 45 ci ex-army bike. Audrey started riding when women’s rights were not clearly established. Many women didn’t even drive cars let alone motorcycles. It was the Second World War that liberated them.

In 1949, she joined the newly formed Skyhawks Motorcycle Club, later called the Welland County Motorcycle Club, after a unanimous vote to allow women as members. She has been a member for over 50 years.

Audrey was probably the first Canadian female member of the American-based Motor Maids, joining in 1949 and becoming the National Canadian Director in 1955 and hosted the first Motor Maid Canadian convention in St. Catharines in 1956.

In 1954, Tom entered his first race on a self-prepared Vincent 500. By 1959, he had won the Canadian junior championship in the 500 cc class on a twin-cylinder Matchless G45. He entered his Norton Manx in the first motorcycle race held at Daytona International Speedway, qualifying fifth out of 85 starters.

His retirement from racing in 1965 was the beginning of his involvement with the distribution of Honda motorcycles in Canada. In 1969, he became the first Canadian on the payroll at the newly formed Canadian Honda Motor Ltd, and went on to fill vital roles across the organization, eventually reaching the rank of senior vice-president. Tom retired from Honda Canada in 1993.

In 1966, he was involved in founding the Canadian Road Racing Club. During his career at Honda, Tom worked with John Nelson, and the two of them, along with two other investors created Shannonville Motorsport Park with a mandate to preserve club racing in Ontario. His pursuit and love for road racing is practically legendary today.

Although he passed away in October of 2001, Gerald German is still fondly remembered by a legion of associates and admirers for his ardent devotion to the cause of motorcycle safety and riders’ rights.

Gerry helped organize the central Ontario Ride for Sight in 1979 and was the first motorcyclist on the Retinitis Pigmentosa Foundation board of directors. In 1981, Gerry was a founding member of the Brampton Motorcycle Association, and helped establish the Ontario Road Riders Association. He served as ORRA chairman from 1982 to 1990, representing 42 motorcycle clubs and 6,000 riders in their quest for fair treatment from government and the insurance industry. Gerry worked tirelessly and selflessly to benefit the sport of motorcycling by being an advocate for bikers’ rights and training youth so that the sport could continue to grow.

David Goulet, who passed away in 2007, served in the Canadian Navy for 33 years, but had a second career teaching rider training, first in Halifax since 1975 and then in Toronto after moving there in 1989. He soon became a chief instructor for the Canada Safety Council and a coordinating instructor for Humber College. In 2001 he was elected to the board of directors for the Motorcycle Touring Association.

Andy Hertel, manager of the Humber College motorcycle rider training programme, says of David, “In performing his duties as a chief instructor under the Canada Safety Council and as a coordinating instructor for many years with Humber, David always delivered his lessons with an infectious enthusiasm that made learning fun and memorable for the students. There are many thousands of motorcyclists in this country who owe a small debt of gratitude to David for his part in their journey to become safe riders and who would support his nomination based on the success that they have enjoyed as a result of David’s commitment to their achievements”.

Doug was proficient in motocross, ice racing, road racing and his most famous endeavour, dirt track.

Doug began riding at age eight and was only 15 when he won his first race on an 80 cc Suzuki. In 1968, Doug was backed by Poole’s Cycle in Hamilton to race CZs in motocross and Harley-Davidsons in dirt track. In one particular race, Doug crashed heavily early in the race and remounted to finish second, but three days later an X-ray showed he’d broken his back.

After a serious crash in 1978, Doug decided to concentrate on preparing machines for other riders. They would discover that Doug’s bikes were among the best in the U.S. and by far the fastest in Canada.

Bob Kelly thought fast cars were the best things going, until he had his first ride on his brother’s Triumph. It wasn’t long before Bob had his own street bike, but his interest shifted to off-road competition. In 1957 he began winning numerous national championships in the 100 and 200 cc scrambles classes. Over the years he successfully raced in trials, dirt track and ice racing.

Racing and working was too demanding so he became involved in producing events for his club, the Steel City Riders of Hamilton. Building a fast and demanding motocross course proved to be as rewarding as racing. Bob went on to produce literally hundreds of off-road events over the years.

The Canadian Motorcycle Association readily accepted his application for the position of senior scrambles referee for all of Ontario. Bob was held in the highest regard by anyone who has ever ridden under his race control.

Bob prefers to stay behind the scene; working his magic at the club track and in the organization of the club’s sanctioned events.

A few weeks after his first ride at 19 years old, Ron bought his first bike, a 305 cc Honda Super Hawk. He rode it to the local scrambles track and began beating all comers. The Honda was his only transportation, but also served as his race machine.

In 1967, Ron’s employer sponsored him on a new 360 CZ. He won the open junior class in seven successive races until he was sidelined by a shoulder injury. In 1968, he was promoted straight to expert, bypassing the senior class altogether and ended the season as the open expert class Canadian champion.

He became Canada’s first full-time professional motocross racer. He competed against, and often beat, many of the legendary riders of that era.

In 1972, he raced on the Deeley Yamaha motocross team. With the newly introduced YZ line, Ron swept the 125, 250 and 500 cc. In 1973, he beat former world motocross champion Jeff Smith by taking the 500 and 125 titles. In the fall of ’73, Ron won a silver medal in the International Six Days Trial in Massachusetts. Ron signed with Can-Am in 1974 but despite the prospect of racing in Europe on the world stage, decided to retire while he was on top at the age of 28.

Bud was always attracted to motorcycles. By age 16 he purchased his first, a 250 cc BSA. In the late 1940s, he entered local scrambles and hillclimbs, winning his first trophy in 1949.

In 1957, riding a 500 cc BSA Gold Star, he finished high points winner for all types of motorcycle racing across Canada and was awarded the Canadian Motorcycle Association’s White Trophy.

Bud began racing in the USA in 1958 and in 1960 he won the 50-mile national amateur at Watkins Glen on the BSA, being the first Canadian to win this AMA national.

In 1963, Bud came out of turn four on the last lap at New Hamburg to take the Canadian national dirt track championship from Yvon Duhamel. At a half-mile race for the Ontario Provincial Championship, Bud crashed into a fence in the heat race and was run over. He went home from hospital with x-rays showing five vertebrae cracked in his upper back and this led to Bud’s retirement from competitive racing.

One of the true legends of Canadian motorcycling racing, Michel reached a pinnacle of success in motocross, ice racing, dirt track and road racing. Through his FAST Riding School at Shannonville Motorsport Park, he also helped propel many of our top racers to winning careers.

In 1980, Michel began road racing and excelled at the sport he is best known for. He won the Canadian No. 1 plate in 1986, 1987 and 1990. Road racing in Canada, the USA and Europe, Michel has represented Canada in seven countries in World Superbike.

Michel had worked for the FAST Racing School starting in 1987, purchasing the school in 1990 and renaming it the FAST Riding School. He used the school to promote his star graduate and protege, Pascal Picotte. Michel also teaches an advanced cruiser and touring course.

Rudi and his family elected to move to Canada after the Hungarian revolution of 1956. As much as Rudi Sr. liked riding on the road, his real love was racing in scrambles and hill climbs. He placed second in the Canadian scrambles championship in the expert class in 1964. He has won countless provincial and national motocross championships.

Rudi continued racing in all forms of off-road competition but also opened Scona Cycle in 1968 in Edmonton. Starting as a multi line dealer, Scone Cycle is now exclusively a Honda dealership.

Racing has given way to long-distance touring. Since 1980 he’s been from Inuvik to Tierra del Fuego.

Founded in 1928, the BEMC has played a vital role in the growth of motorcycling as we know it today. The BEMC was launched to promote British motorcycles and the types of events to which they were best suited. The BEMC was quickly involved in organizing trials, scrambles, hill climbs and road races in Southern Ontario. Anywhere a suitable location could be found including hill climbs on the banks of the Don Valley in Toronto.

Once a year BEMC held speed trials and long-distance races in Wasaga Beach on an improvised beach course, this lasted until the final event in 1950.

Motorcycle riders in the military held a very important job but got little, if any, recognition. They usually didn’t have their own units or divisions but were attached to the Royal Canadian Corps of Signals.

A regiment’s history is pretty well documented, but the history of the dispatch rider is mostly in the memory of the rider, their contribution to the war(s) is mostly ignored.

The entry into the Motorcycle Hall of Fame is not to glorify the soldiers or any war, but to modestly say thanks for the service they offered, and the sacrifice many made, to their country.

Dave bought his first motorcycle in 1953 for $175. In 1961 he bought a brand new BSA Gold Star Clubman and used it as basic transportation during the week. In 1962 he began racing it on weekends.

Throughout his racing career he has raced BSAs, Triumphs, Manx Nortons, Matchless, Honda, Suzuki and Yamahas.

His volunteer work includes a number of years on the Board of Directors for the Canadian Motorsport Hall of Fame, and the Canadian International Motorcycle Hall of Fame Museum and is currently a member of the CVMG. VRRA, and MCC.