I was born and raised in Toronto during the ’50s. Back in those days there was lead in paint, in gas and in drinking water pipes. After dinner, where all of the daily issues were discussed, and after chores had been done, we were all allowed to play outside until the streetlights came on. We all knew our neighbours and everybody looked after everybody. The term ‘Politically Correct’ was probably being bounced around, but nowhere near cast in stone. As a kid we played Cowboys and Injuns, Cops and Robbers. Bonanza had just started and Little Joe was always gettin’ whupped by Hoss while Hop Sing made dinner. As a kid I never gave a second thought to who was Italian, Irish, Greek, Black or Green, they were all my friends and their mom’s always stuffed me to the brim. Oh, yeah.

I was a bit of a ‘whoops’ as far as family planning goes, therefore my sisters and brothers were quite a bit older than me, so I got the extra royal treatment of being allowed to hang out with the guys after the streetlights came on while they messed about with their ’55 Chevy or my brother’s Triumph Tiger. That was special. Gas was 37 cents a gallon and I can remember my brothers moaning about the outrageous cost. The milkman delivered dairy products to our front step from a Divco truck and he knew my name. We had one telephone that you dialed and I can still remember the number. I rode a two-wheeler that had hockey cards stuck on the forks with clothes pegs, and given the right imagination, sounded just like a Harley-Davidson as they snapped themselves into oblivion against the spokes. Sheriff puddings had plastic coins in the box with a scratchy image of a hockey player, we traded those things like they were gold and I think I still have a few of them in one of those boxes way behind everything else. I could have been the Beave’ and my buddy was definitely Eddie Haskell. 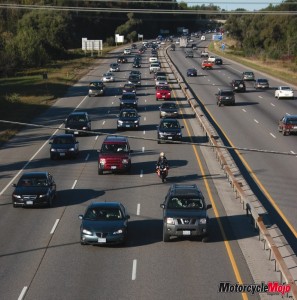 That was the ‘burbs of Toronto in the ’50s. Things have sadly changed since, but like watching a kid grow, you never really notice much of a real difference until you step away for a while. Add to the mix that as you grow up, get married, start a family, deal with work, juggle a mortgage, taxi kids to school, sports, and the list goes on; you kind of put things in a ‘today’s to-do list’ perspective that has the throttle wound wide open. Change is there, but recognizing it becomes more clouded as time blasts past.

This last July my big bro, John, and I were lucky enough to step away for a while with the hopes of re-introducing ourselves to both the forest and the trees. In doing so, I never thought the change that I was about to see would be so dramatic or so emotionally unsettling. The ’50s meshed with the second millennium. It called for several bottles of red vintage for us to discuss and rationalize the whole sodden issue, of which we still haven’t settled, so we’ll need to go back.

Even though you can read a three part article on the trip that truly changed our lives, I had to make one observation that departs from the trip itself. On July 1st, John and I took off on a two-wheeled trip to the top of Canada. John at the young age of 69 jumped on Honda Canada’s very first North American version of the Honda Varadero. I piled a mess of gear on my ’07 BMW GS Adventure and we headed to Inuvik. Two old farts heading north.

Both John and I have this label that we’ve carried around since day one. The label simply states that “watch out, we’re both ‘A’ class workaholics”. Ontario tends to breed this mentality. This trip was our very first attempt at being away from the normal grind for thirty days. All things considered, that’s like locking the booze cabinet in front of an alcoholic and swallowing the key. For the first few days it was go-go, gotta be here by such and such a time, no excuses, get moving, so what if you’re tired! Roll on!

This was the first time in our lives that either one of us had taken, borrowed or stolen ‘time’ to go and be true riders. However, it was that ‘time’ that changed our lives forever and emphasized what an awesome sport we chose. We also slowed down. Way down.

By the time that John and I landed in Canmore, ALBERTA (not BC – history has proven that I have the ability to cause geological catastrophes by switching places and provinces around where I end up receiving a swift kick in the pants by Mojo readers), we had started to shake off the first twitches of a workaholics’ cast in stone routes, ‘X’ klicks / day started to dwindle and we began to plan our routing through whatever Environment Canada had to say, which in our case was none too cheery.

Leaving Canmore, we started to see a change in people that would continue to evolve the further north we went. By the time we hit Dawson we were in an atmosphere that may as well have been from Mars, considering we were both hard core ‘Tarawna’ boys. People were different. Before helmets could be removed you could pretty well guarantee that someone would walk up and say something along the lines of: “Hi, oooh Ontario plates, long way from home. Where ya goin – where ya been?”, and then they actually took the time to either sit down or lean against the nearest object to listen for the answer. This wasn’t limited to motorcyclists who are the gabbiest bunch on earth, no; this was from cage drivers, truckers, young and old alike.

I know that if I were to say hi to people in ‘Toronto the uptight’ the same way one would greet a true Northerner I’d probably be answering some serious questions in the back of a police cruiser. John and I talked of how refreshing this was, but we had no idea that this was just the start of our re-introduction to old fashioned humanity. Our ‘A’ class personalities were having time management completely shredded by the ‘gab factor’ and we were reveling in every minute of it.

We were correcting some mechanical issues on the mighty Dempster Highway, which is not what I’d call a gridlock worry. After two hours a dusty Toyota Camry – the only vehicle to pass by, rolled up beside us and the fellow said somewhat apologetically, “I have no tools, but I’d be glad to take you somewhere.” So far that was 100% of the passerby’s that stopped to see if we needed help. Try that on the 401 or the Trans Canada. Later that night we limped into the Klondike River Lodge and although the tire shop looked locked the owner said, “The lock is really open, go help yourselves, just let me know what you’ve used.” Other people, like one fellow, a tire repair guy couldn’t help but poke his head in and ask if we needed help, mentioning that he had done a mess of repairs in the same area that we broke down. That’s where we learned about seating a tubeless tire on a rim with spray ether – a scary practice that I’d love to see done, but I wouldn’t recommend it as being completely safe.

We were talking about our genuinely open ‘people encounters’ with Dan Blake, a First Nation’s fellow from Inuvik and one of the regulars at the Klondike River Lodge. Dan is one of these guys that you’d want in front of you in a full fledged bar fight as he’s big enough to pick up the whole place and fold it up like tissue paper, yet he’s one of the softest spoken and genuine folks around. He gave me a sense of the people that call the Yukon home and it doesn’t seem far off from the folks I grew up with back in the ’50s. Everyone looks after everyone and everyone is responsible for their own actions. What a refreshing thought, even if it did hit me like a ton of bricks. From Dan’s quiet observations I saw two diametrically opposed wildernesses come into focus.

The one we were currently visiting you stand a chance of getting hit by a moose or torn apart by a bear if you do something foolish. That’s part of Mother Nature’s order of things. Natural culling of the human herd I guess. The other ‘wilderness’ I had just come from you may get hit by a bus or torn apart by a two legged carnivore. The difference is that in the north a moose/elk/buffalo strike is accepted as a real possibility so you stay off the roads when the big critters are out or keep a sharp eye and your speed down if you need to be on the road after dark, then you simply and respectfully share the roadway. If you get torn apart by a carnivore, well perhaps you weren’t prepared to be where you were, or you may have been in a ‘backyard’ that really didn’t belong to you. Nature rules here, us humans are just along for the ride. If something bad like that happens, true Northerners will probably dispatch the wayward beast and someone will end up with a nice rug and a short but interesting story to go with it. Regardless, you won’t be forgotten.

In my wilderness, nobody really gives a damn and no matter what happens it’s always somebody else’s fault. I guess that’s why there are so many lawyers with southern Ontario addresses. I see this difference as being truly unfortunate for everybody concerned. It was reinforced when John and I hit the crush of the Ontario border. Big S.U.V.’s pushing and shoving for three inches of room. Posers in fancy 4X4’s that have no idea what the real world is all about. If they were to risk getting some dust on their Hummers, Navigators or Escalades and make the trip to where the vehicle doesn’t count but the people in them do, then maybe we’d need less lawyers and from what I saw and felt, Northern folks take honest responsibility for their own actions.

I was moaning to John that I saw more legislative signage and presence of law within fifteen minutes of passing over the Ontario border than I did over the last three weeks of being up North. He just shrugged his shoulders and said: “Ya, I know, but look at the audience.” With that statement I knew that both of us had cast off our workaholic label and needed to go back north and spend some quality time where – it is what it is. No more. No less. Now if I could only understand why I had tears in my eyes. MMM