From the song “Fifth Gear” by The Vicious Cycles

Maybe it was a bad day because I couldn’t ride my motorcycle.

1st gear.
Maybe it was a bad day because it was miserably raining out and the insane woman at the supermarket with purple hair yelled at me because I accidentally touched her cauliflower in the check-out line.

2nd gear.
But truthfully, right from the moment I woke up, bonked my head on my dresser drawer which then knocked over my blueberry smoothie right into my nice clean t-shirt drawer thus causing me to curse and turn abruptly into the corner of my very sharp bed frame – I guess, with all fairness to the motorcycle gods, you just had to blame it on the fact that I couldn’t ride my motorcycle that day. Yes… that was it. I couldn’t ride my motorcycle. 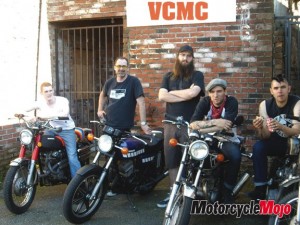 3rd and 4th gear.
Regardless, I wasn’t going to let my ‘gong show of a day’ get me down. I needed a serious distraction. So, instead of pulling out my bike, putting on rubber gear in the cold rain, I slipped into a cute little dress, some big ass boots and found myself at a book launch for a ‘Tattoo Coloring Book’ at The Anza Club in Vancouver, BC. After my foul day in the city, the whole thing seemed like a good idea – tattoo artists, burlesque performances and a live rawk-out with my latest favourite local band, The Vicious Cycles.

Yay! Fifth gear.
Now, this ain’t no ordinary band. This is a group of ol’ school ratbikers who play ONLY motorcycle songs – damn right! A high energy, used motorcycle oil, melting pot of musicians including my friend, Norman ‘Motordaddy’ Anderson, also known as ‘Ol Knucklehead’, and
his son, Jared ‘J-Rat’ Anderson, Billy ‘Skooks’ Bones, Tim ‘Meato’ McLeod and Rob ‘Beardo’ Wright. To encap-sulate their sound description, the boyz describe themselves with three words: Garage/Punk/Hawaiian; you throw in some ’60s biker film bites, the gumption of a punk band with an energy to create some much deserved moshin’ on the dance floor and even some clacks from a coconut shell – woot! The best part: the band wouldn’t START playing until there were peeps ON the dance floor and then the whole thing just went OFF! Serious good fun and imagine… all the songs involved m-o-t-o-r-c-y-c-l-e-s.

I have to say, I forgot all about my bad day, couldn’t take the cheesy grin off my face, especially watching some of the local biker boyz get somewhat rowdy with a little slammin’ and splashin’ beer on the dance floor. One of my favourite songs is “I Don’t Care Let’s Ride”, the one where the guys all get passive aggressive and wimpy on stage making excuses for not riding… like being fair-weather bikers and then you just go hardcore. I love that song! It makes me want to ride even though my pipe fell off.

Now, this local Vancouver band is going places so if you happen to have the opportunity to see them live – DO IT! They rawked the house, all the while incorporating various mediums like film loops and sound samples from the whole ’60s biker scene, the music, the movies, the outlaws, the bikes – they include it all.