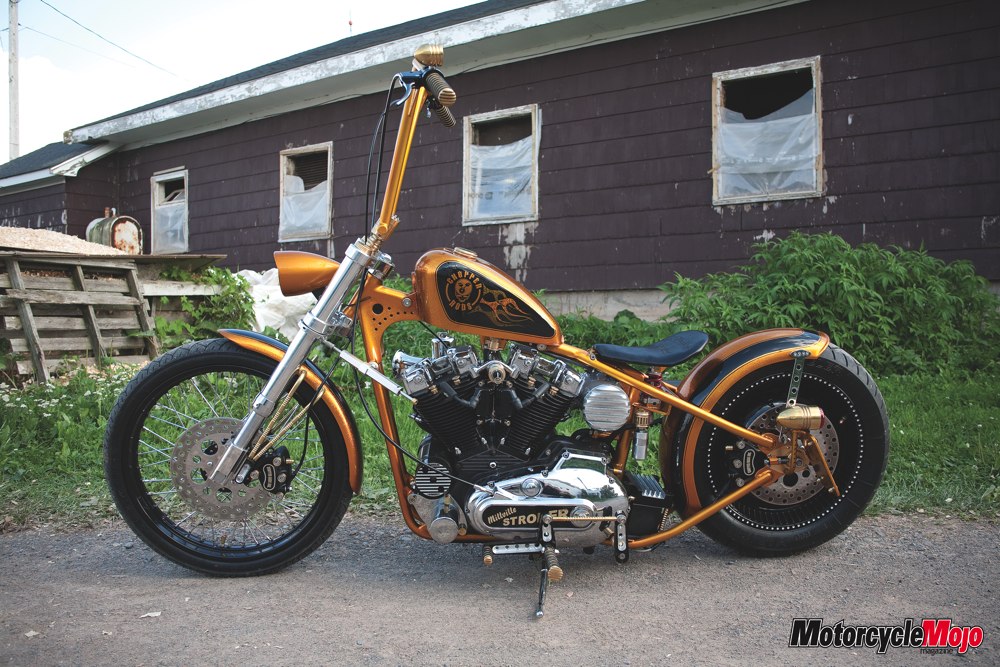 There are some bikes that just seem to stand out from the crowd. They have a certain appeal or something particularly unique about them. It might be the hand-made parts, the way the lines flow, the story behind the bike or maybe it’s just the fact that it is a fine example of a show winner. The Millville Stroker is all of that.

Rod Johnsen, from Chopper Rods in Fredericton, New Brunswick, remembers a bike in the late 70’s that used to tear up the streets near his then hometown of Nackawic, about 60 km outside of Fredericton. Millville was a neighbouring town and while there were only about three Harleys in the area, this 1975 Sportster had the biggest, baddest reputation.

Rod remembers a fellow named Johnny Dyer that owned the bike. Johnny had the engine built in Quebec and it was one of the first strokers in the area. The engine was increased from the original 1000 cc to 1166 cc due to the increased throw on the 4-5/8” crank.

“Johnny could make a bike look real good. He was one of those guys that could ride a bike and bring out the best in it; he really made it look more than it was.” Rod said and then laughed, “He was a certified nutbar”.

Fast forward many years, Johnny passed away and the bike languished in a cold damp garage for a few years until Rod got a call around midnight from Johnny’s family; they wondered if Rod would be interested in purchasing the derelict bike. You have to remember that regardless of the bike’s condition, this was a piece of personal history in Rod’s influential teen years.

Rod purchased Johnny’s legendary ‘Iron Head’ Sportster and proceeded to tear it down, trying to determine what, if anything, was salvageable. Rod began doing what he does best, rebuilding the engine. He rescued the Stroker engine and the rest of the driveline, but sold the remains of the once proud Sporty.

Chopper Rods opened for business six years ago with four guys in the shop; Rod, Skeeter Longaphie, Martin Speer and Mike Beattie, and while they build a few customs every year, they specialize in Harley service and repair. The boys in the shop also know a bit about engine building, fabricating and the need to feed a hobby that includes flying down the quarter mile well in excess of 137 mph, with street tires no less. Chopper Rod’s is a major player in the Atlantic drag racing scene and during the ‘All-Harley Drags’ in PEI this past summer, they were declared to have the fastest Harley in Atlantic Canada.

Everyone in the shop got involved in building the current ‘shop bike’. Many of the parts were handmade in–house, partly because the guys have the skills, but more importantly, they were a bit strapped for cash. Skeeter began to gather scrap chunks of brass from the local salvage yard, including an old brass driveshaft from a boat, and got to work on the lathe and milling machine. All of the brass on the bike, including the valve stem caps, were crafted by Skeeter. The oil tank was fashioned from an aluminum pipe, and once again, Skeeter put his finishing touches on the milled endcaps.

Other interesting components include the rear brake master cylinder that came from a wrecked bike of one of Rod’s buddies. It used to be the hydraulic clutch master cylinder. The front-end came from a smashed Big Dog. The boys cut a few inches off of the downtubes to shorten them and made it fit the Millville Stroker. But one of the most interesting facts is that it has belt final drive. Iron Head Sportys never came with a belt drive and it’s one of the bike’s components that not many people notice. With intricate detail, the boys fabricated a pulley off of the transmission’s main shaft for the belt drive to work.

The paint went out to local painter Bruce Carr for a healthy coating of 1/8-inch metal flake and a total of 30 coats of House of Kolor Pagan Gold and clear coat to finish things off. Due to the hard work from the guys at Chopper Rods and topped off with the deep metal flake paint, The Millville Stroker took top honours at the 2008 Dutch Mason Blues Festival and Motorcycle Lifestyle Show in Truro, Nova Scotia.

Sometimes the coolest and most unique bikes are the result of a scratch-built hodgepodge made with soul and pure talent, and it doesn’t hurt to throw in a good dose of legendary local history either.

Rod rode the Millville Stroker for much of the summer last year proving that history can indeed repeat itself in very fine form and is not just for reading in books. MMM