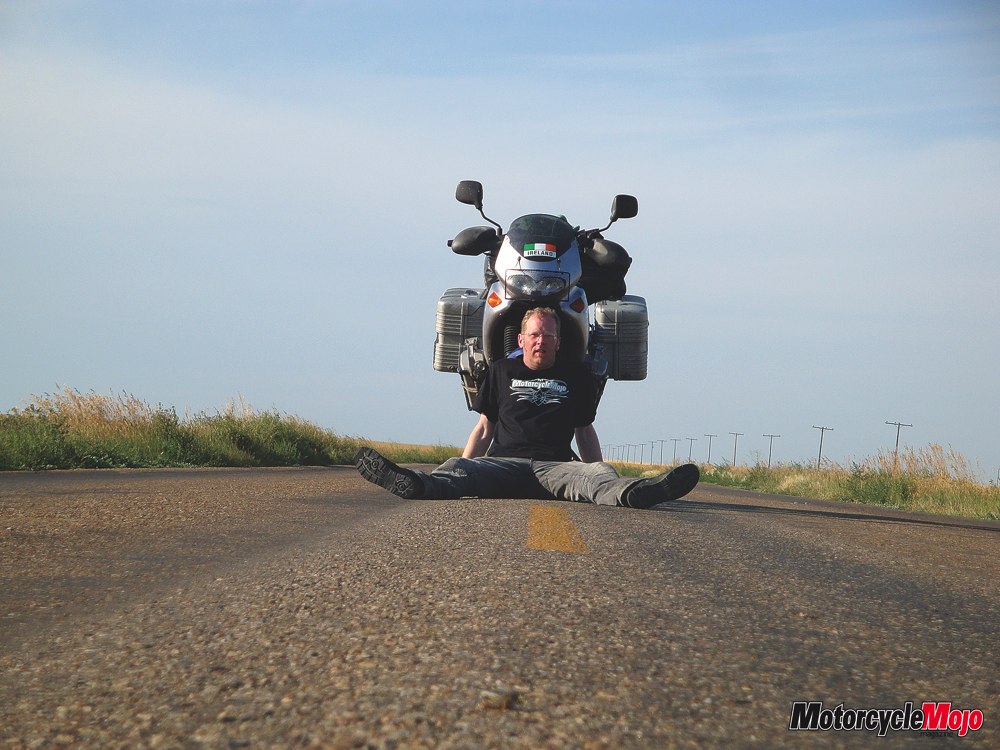 I have been secretly travelling with my friend Paddy—no one really even knows I’m gone. I go to work, close my door, open my emails and away I go.

I seem to be obsessed with the adventure that Paddy is on. When I check my emails and see his name, I can hardly wait to open the photos then read along to see what exciting things have happened since our previous correspondence.

Paddy is an Irish fellow we met at Atlanticade in Moncton, NB in June of 2008. He won an award for travelling the furthest to get to Atlanticade—well—in a round about way—he actually just sort of showed up and attracted a lot of attention.

Paddy then travelled across Canada, headed to San Francisco then back to the UK for some medical tests. Once cleared for travel again, he arrived in the US and began the next leg of his journey which took him from California, then to Arizona where he ran into a bit of trouble with the law—of course I found this rather humorous and thought I’d share it.

Officer Simpson demanded to know where and why Paddy chose to ride his bike with a such a stupid licence plate on and where his real one was. Paddy explained that he wasn’t from Arizona and that he didn’t have an Arizona plate because he was just passing through.

Officer Simpson replied, “But there aren’t no gosh darned way you can ride that motorsickle in the United States of America with that Mickey Mouse licence plate!,” then he demanded to see Paddy’s permit to drive. Paddy pulled out his International Driving Permit only to be told he needed to have a permit to drive in the US of A. Paddy said “you’re holding it.” Officer Simpson threw the licence at him and grabbed his gun. Paddy’s friend Matt grabbed the camera and Paddy grabbed his tongue.

Officer Simpson wanted to know who told Paddy he could enter the States with his bike to which Paddy explained, “it was the US embassy in London”. Officer Simpson continued that no one takes motorsickles across borders anyway, and there is no such thing as anyone having the right to drive in a different country. Paddy then suggested Canada before he realized it.

Officer Simpson called the office again and the next time he spoke his attitude softened a bit. He put away his gun and told Paddy not to make up crazy stories about documents that let you cross borders and permits to drive and that Paddy was lucky that he wasn’t going to be arrested.

After that episode Paddy and his travel buddy Matt, who decided to tag along with Paddy somewhere in the US, high-tailed it into the mountains as they proceeded to continue their journey toward New Mexico.

Camping 8000 feet above sea level they soon realized was stupid, as they had to wear everything they had and also had to sleep with the cooking fuel to enure it did not freeze. The bikes would not start until mid-morning when the sun had a chance to warm them up.

Well, perhaps the part about getting stopped by the troopers was not part of my secret journey, but you have to admit it certainly makes for a good story. I have collected a binder full of humourous emails that Paddy has supplied me with and have made a slide show of his photos to keep me entertained, complete with music.

His adventure is one I would love to have taken part in, well until further along when he starts to mention the two tarantulas on his tent, I think I might not do so well at that point.

So for me this is as good as it gets. Secretly travelling along on the back of Paddy’s bike heading to Belize. Wish us luck, and let’s hope no one at work realizes I’m gone.