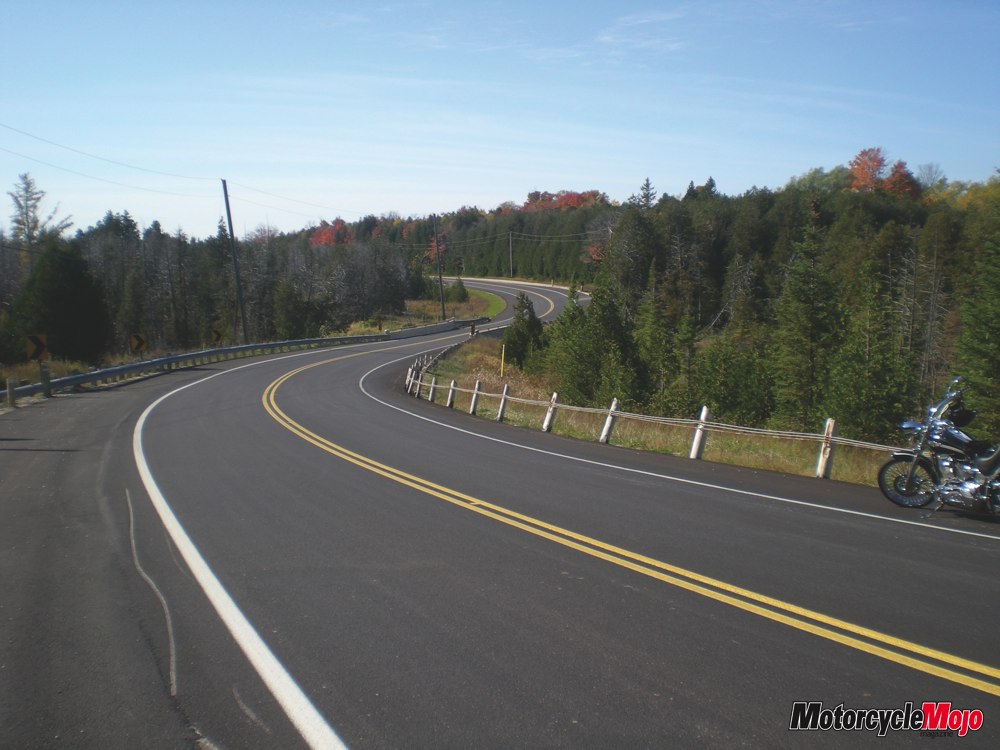 The last ride of the season. It can be cold enough to convince you that the bike should soon be put away, but dramatic enough to make you feel like you stole one more precious ride from the clutches of the approaching winter. When all the stars align, it can be the perfect end to a great season of riding. The stars certainly aligned for our group during a spectacular autumn ride through scenic Grey Bruce counties in Southern Ontario.

Regardless of the season, there’s more to the Bruce Peninsula than most realize. Although settled by Europeans since the mid 1800’s, much of the peninsula has remained rural and untouched. Being a geological cul-de-sac, it has resisted much of the development seen by the rest of Southern Ontario. A handful of picturesque small towns dot the shoreline along both sides of the peninsula, otherwise leaving the shore much as it was for thousands of years. As the natural breakwater between Georgian Bay and the main basin of Lake Huron, it has also claimed countless shipwrecks over time. So much so, that Tobermory has been described as the Shipwreck Capital of Canada and the Freshwater Scuba Diving Capital of the World.

A better-kept secret is that the region offers motorcyclists some truly unique and varied riding experiences, all very close to our beloved civilization. There are of course many scenic routes that follow the shoreline and offer the lakeside views that you may expect. What may come as a surprise however is the wealth of secluded winding roads that ribbon the Niagara Escarpment itself, as well as the adjacent valleys and foothills.

Our ride started on a brisk Saturday morning in October, northwest of Toronto. It was sufficiently frigid to make the three of us exchange remarks like “Are we still good?” and “Gonna be warm enough like that?” It would, however, take more than cold to deter us from our plans, and the time already begged off from our families. With a robust breakfast and a shot of bravado, we were on our way.

We wanted to make sure the ride to Grey Bruce would not be just the means to an end. Shortly after departure, we rode through the Forks of the Credit Provincial Park and got our first good look at the fall colours. It was early enough in the season that the mosaic of autumn leaves was still firmly attached to the trees and not covering the road on some blind corner in the park. They always look so much better on the trees.

We rode into Orangeville under a cold rain and stopping only briefly, had our final, “We still good?”, “Uh huh…” and “Me too…”, conversation. So on we went. Clearly we had made the right decision; the rain cleared a short time later as we passed the spectacular new Melancthon Wind Farm, just north of Shelburne. The 45 gently spinning white giants were only recently constructed, so the ride past them was a pleasant surprise.

Leaving Highway 10 at Flesherton, we took the scenic Grey Road 13 north towards Georgian Bay. Grey Road 13, or Beaver Valley Road as it’s better known, is a brilliant ride. There are a few scenic rest stops along the route that are well worth using, whether you need rest or not. After taking full advantage of one of these stops, we pressed on along 13 to its end near Thornbury, at the edge of Georgian Bay. We then proceeded west along Highway 26 through Meaford to Grey Road 112, which in turn brought us to our lunch.

For many riders who know the area, Ted’s Range Road Diner is a ubiquitous and colourful stop. The menu includes a diverse collection of caribou, emu, and alligator, as well as several of my kids’ other favourite zoo characters. Our hunger being what it was, I cannot think of a creature at which we would have thumbed our noses, so clearly we had come to the right place. Although we would have gladly rested longer at Ted’s, with a hot lunch inside and many miles to go, it was time to push on.

After getting back onto Highway 26, we passed through Owen Sound. It seemed like the whole town was strolling about downtown and making the most of what had become a perfect autumn afternoon.

Leaving Owen Sound to the north on Grey Road 1, we took the scenic route (Grey Road 26) along the water’s edge through Big Bay and on to Wiarton. By itself, this road would be worth the ride from Toronto. With the autumn colours on our left and the calm blue water of Georgian Bay on our right, it offered a scene worthy of a postcard. Another rider once described the view of the escarpment here as reminiscent of the White Cliffs of Dover, with Colpoys Bay playing the role of the English Channel. It’s that good.

We gassed up in Wiarton, and then rode north on Bruce Road 9 to Lion’s Head, our final stop for the day. The timing was perfect since the setting sun was making the autumn chill harder to ignore. Lion’s Head, as we learned over dinner, is so named because of the natural shape of the cliff to the North of the town. Like the Sphinx, the lion has lost his nose to time, but with a little imagination one can still see why the name fits.

We spent the night at Taylor-Made Bed and Breakfast in Lion’s Head. As seasoned motorcyclists themselves, owners Dave and Barbara Wynd knew exactly how to create the ideal rest stop for riders enjoying the Bruce. They offer a locked garage for the bikes, a five minute walk to local restaurants and pubs, and of course the company of other riders. Barbara recently moved to Canada from Norway, so the atmosphere and menu reflect her European influence. Breakfast included soft-boiled eggs, homemade muesli, fresh breads, cheeses and meats plus pickled herrings for those who had not already given their palates a workout at Ted’s Diner.

After a warm breakfast and goodbye to all at the B&B, we headed north on Highway 6 to Tobermory, at the northern tip of the Bruce Peninsula. As we approached the outskirts of town, the morning clouds cleared to let the fickle autumn sun shine on us once again. Tobermory, if you haven’t been, is a beautiful port town that would be as much at home in the Maritimes as it is here in Ontario.

Coming back south along Highway 6, at the northern outskirts of Wiarton, we took a right on Bruce Road 13 to Oliphant, on the western, Lake Huron side of the Bruce.

Bruce Road 13 continued south to Sauble Beach. Like Owen Sound, Sauble was bustling. Even in fall, when the water is too cool for swimming, the town is still a magnet for sightseers, anglers and, of course, riders. After pressing south on Bruce Road 13, we met up with Highway 21 at Southampton.

After lunch in Southampton, we ventured off the main road to take the more rustic Miramichi Bay Road south, and once again enjoyed the view of the lake on our right, with forests and cottages to our left. Both thumbs up for the view on this route, but be sure to keep both eyes out for loose gravel! My bike took a sinus-clearing lateral slide into the oncoming lane going around a sharp right-hander. The rubber side stayed down, but it was still a forgettable moment in an otherwise unforgettable weekend.

We said goodbye to Lake Huron at Port Elgin. At this point, it seemed that the truly scenic part of our journey may have been behind us and it was time to tune out and make the long ride home. We were pleasantly surprised however, to find that Grey Bruce had one more revelation in store for us.

You often find the best routes when you toss out the guidebook. We doglegged our way southeast from Port Elgin on County Road 40, Bruce Road 10, and Grey Road 25 before making our way to Highway 6 and finally Grey Road 12. All were brilliant routes, but be sure to add Grey Road 12 to your list. With mile after mile of secluded winding road through blond pastures and rolling hills, it was easily the biggest surprise of the trip.

At Markdale, we returned to Highway 10 and pointed ourselves straight home. By late afternoon, we passed once again through the Melancthon Wind Farm and back into familiar riding territory. Thereafter, the weather mysteriously returned to the same cold rain we had ridden through the day before, on the same stretch of road.

In some ways, it felt like we had relived the entire season in one weekend. After a cool but confident start, we had a fantastic array of riding experiences, followed by a bittersweet ending. I cannot think of a better note upon which to put the bike away, and begin the long wait for spring.