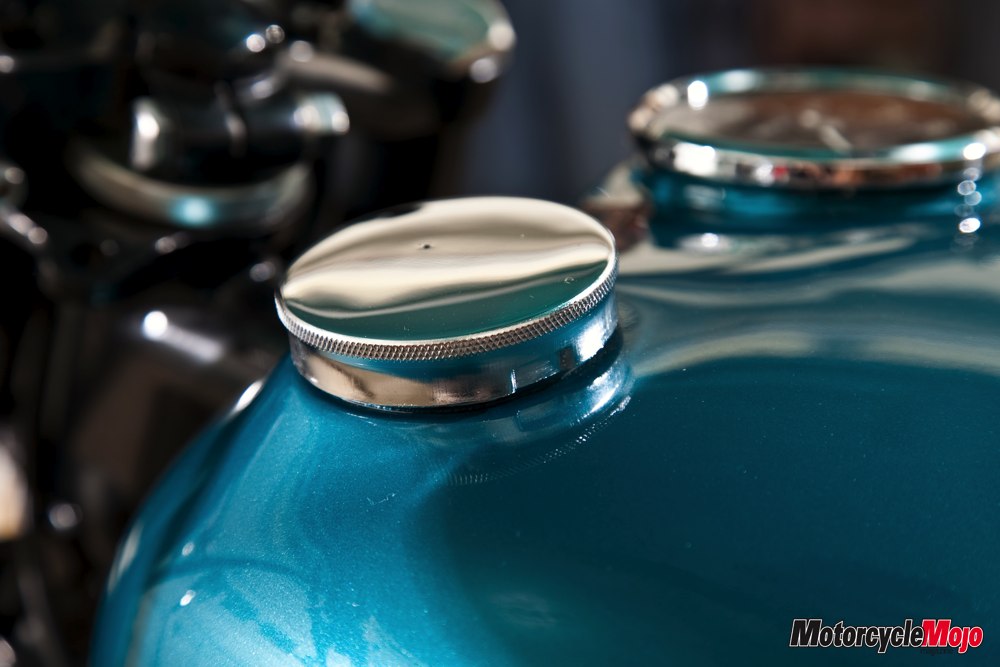 Growing up on a farm meant learning the mechanical workings of just about anything that a wrench can be applied to; including the maintenance of the family’s road vehicles, farm machinery and implements. Although a Massey Ferguson is much different than an English-bred Triumph, the products from the famous British marque are nothing new to Mark Hagedorn. Mark was a mere 14-years-old when his father relied on him to keep his mother’s car, a Triumph Spitfire, roadworthy.

During Mark’s formative years, a friend of his mentioned how cool it would be to own a Triumph motorcycle. That statement planted a seed in Mark’s melon and a short time later, Mark and a couple of friends bought four Triumphs in various stages of disrepair and neglect.

The three amigos scavenged whatever they could from one of the derelict bikes and after gathering more bits and pieces from here and there, Mark said his first creation from his inaugural basket case resembled a hill-climber. Mark found a budding hobby from that first basket case that in Mark’s words, “wasn’t original, and could never be made original, but I was just having fun with it.” The experience he gained from making something from nothing set the stage for many other Triumphs. Mark isn’t sure of the number of Triumphs he has ‘had fun with’, but his best guess is, “more than ten and less than twenty”. That number also includes a couple of full restorations as well.

Mark, a Superintendent of a golf course which has him looking after all the equipment maintenance and outdoor operations, still continues to pursue his sideline of building basket case Triumphs into cool and functional machines during his free-time. His many years of mechanical experience proves he is not shy of performing any kind of mechanical task, including engine building. “An engine is an engine. You have tolerances to follow whether it’s a Triumph engine or an engine in a piece of golf course equipment.”

In the case of his newest bike, Bonneville Blue, the front of the frame is stock while the rear section is a 6-inch-over-stock bolt-on hardtail that Mark welded to the original front section. He removed the bolts and cleaned it up making it look like a one-piece frame.

Along with the purchase of a few new pieces, Mark fabricated many of the parts along with some special swap meet gems. The headlight pot is a Guide 682 headlight commonly seen on large trucks and full-fendered cars from the 30’s. The top marker light that once served as the turn signal is now repurposed for use as his high beam indicator. Around the same vintage, the 80-year-old taillight was a common fixture on automobiles of the day and was found by Mark’s father at a swap meet in Arizona. Mark also thought he would add a little of Triumph’s own history by mounting a 50’s-something Triumph bicycle badge from the Triumph Cycle Co. Ltd. in Nottingham, England to the frame’s single downtube.

The 1968 engine began life as a 650, but during the rebuild Mark installed a Morego big bore kit that boosted the engine internals to 750 cc. After re-valving the head, Mark added a pair of Amal 930 carburetors and a complete Boyer electronics system, the latter allowed Mark to completely eliminate the dreaded original Lucas wiring and the battery. Mark’s addition of the BSA B32 gas tank with internal Speedo put the finishing touches on his newest creation.

Mark finished the bike in late November, but now that the nicer weather has finally arrived, Bonneville Blue, like his other Triumph builds, will become his daily rider. He just hopes he doesn’t disturb any early morning duffers as he rolls into work at 5 a.m. every morning. MMM