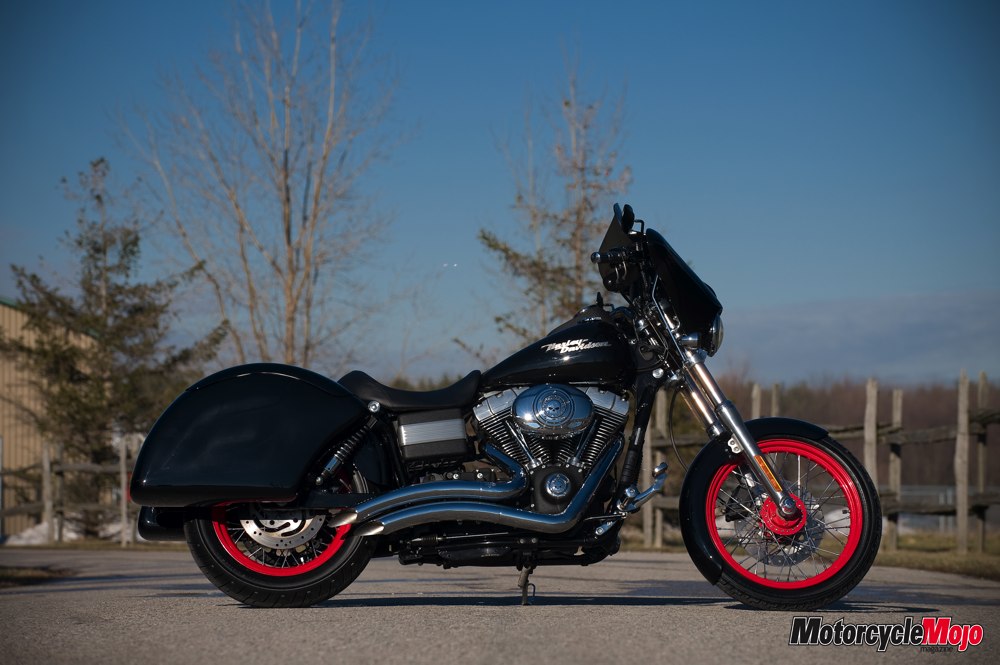 “Do you have any hard-bagged lightweight or middleweight bikes?” That one simple question got the wheels turning in the mind of Wayne Pitt, General Manager of Duke’s Harley-Davidson. Wayne realized there wasn’t, but should be a middleweight nimble bagger on the market.

Wayne’s immediate call to action was to come up with a viable motorcycle platform to make into a functional middleweight bagger. His first thought was the V-Rod; but after having a Road-Rod (a V-Rod with a Road Glide fairing), he found it too cumbersome. He began thinking of a lighter fairing equipped V-Rod with bags. As timing would have it, Canadian custom building legend Bob McKay called up Wayne to order a Super Glide for the same reason–to build a middleweight bagger. After the two of them collaborated on the possibilities, the Signature Series V-Rod and Dyna baggers were conceived and Duke’s H-D commissioned McKay to build only six of each model. Both platforms, Wayne hopes, will fill a void in two different demographics, but can easily carry-over to any other demographic that’s looking for a nimble touring bike.

Wayne figured that the V-Rod would suit guys in the over-35 crowd that are looking for performance in a middleweight package, that offers good wind protection along with the ability to carry some belongings. The Dyna package, on the other hand, would be well suited to the female rider that would like hard bags and a bit of wind protection in an agile touring machine, as opposed to a full-sized heavy touring bike. Both are well suited for weekend or weeklong travel.

Both the V-Rod and the Dyna have had extensive work done to the fairing and to the fibreglass bags to make them fit tight to the bike and wrap around the rear shocks. The front and rear steel fenders on both bikes were custom fabricated by McKay to follow the lines of the bike and the bags. The addition of select accessories round out the Signature Series baggers.

Both models will be available as limited editions as numbered and personalized Signature Series models. Each bike will be built to order for each buyer, including custom paint, exhaust, chrome, powder coating etc.

Go to www.dukeshd.com for more information.