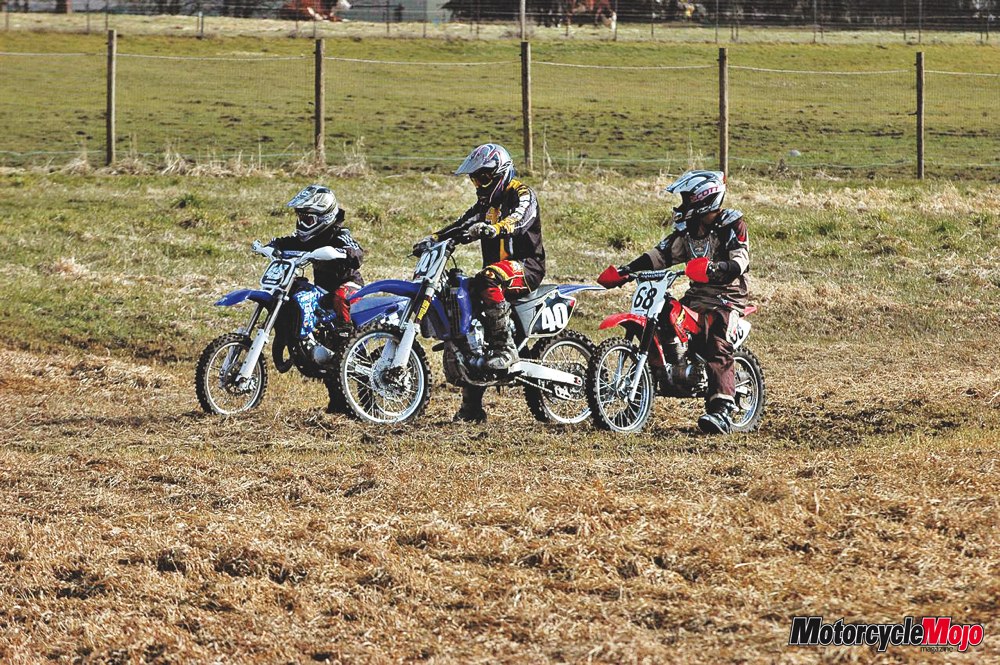 I tried on my motocross pants, but they got stuck at about thigh level, so, I decided I’d just have to ride in my jeans. My riding jersey was very snug, but I just tucked it in tight so it wouldn’t ride up, no big deal. Then I put on my chest protector and felt it bump against my 6.5-month pregnant belly and I let out a laugh. “I wonder if they make maternity dirt bike gear?” I said aloud and we all giggled. “Looks like you’ve got a nifty business idea there Misti” said Michael grinning before I put on my helmet, started the bike and rode off to join the others.

The others were 10-year-old Nicole Lenz, her 11-year-old brother Peter, my husband John Parker and my 2008 Slednecks road racing teammate Josh Galster. We were all enjoying a beautiful day of backyard motocross riding. I was riding one of the many little bikes in the Lenz fleet. I chose the Honda XR100 because it seemed a perfect fit for me as I was comfortable that I wasn’t going to crash it, or be able to ride it too fast if my competitiveness got the best of me, i.e., forgetting that I was “with child.”

Save for it being a little bit awkward having a big ol’ belly sticking out, it felt awesome for me to be back on a bike and the kid loved it too. As soon as I started off, standing up most of the time so that it wasn’t too bouncy, the kid started kicking and moving around in my belly. I’m hoping that he or she will get used to, and enjoy the sound of motorcycles and grow up to love them as much as mom and dad do.

I had been thinking a lot about how there are fewer and fewer kids and families playing outside together these days. With video games, iPods, Nintendo DSs, movies, and TV taking over, kids are staying indoors and becoming more and more independent, withdrawn, unhealthy, and fat. That is why it was so refreshing to be invited to the Lenz’s backyard mini motocross track for a weekend of good riding fun. Motorcycling it seems, is the perfect family adventure, complete with exercise, fresh air and a sense of camaraderie. Both John and I are looking forward to raising our kids on bikes and enjoying adventures and the outdoors as much as possible.

Our invitation to the Lenz’s wasn’t as much of an invite as it was a challenge. John and young Peter, the 11-year-old road racing phenomenon out of Vancouver, Washington, have this hilarious competitive relationship that consists of endless banter back and forth.

“I’m way faster than you on the track,” says Peter with a sticking out of the tongue ‘nanananana’ to John.

John fires back, “No way! You have more time on that track than I do and I was just being nice to you because you are a little kid. And just you wait ‘til we hit the dirt because I rule the dirt. You are a goner!”

“Oh ya, well I have a motocross track in my backyard, why don’t you come down and see for yourself how you’ll get whooped in the dirt as well.”

So we were ‘on’ and one weekend in late February, John and I packed up our mighty travelling garage with just one of our dirt bikes. After a long and uncomfortable five hour drive we arrived and were greeted by an excited Peter and his equally excited family members; mom Jennifer, dad Michael, and sisters Clarissa and Nicole, along with a recovered Josh Galster (who had broken his neck in a September race crash). Josh had driven up from Colorado to deliver a race bike and decided to stay for the backyard motocross challenge, touting it as “physiotherapy and good training.” The air was thick with anticipation and preparations began immediately for the following two days of riding.

Gear was unpacked and laid out, bikes were oil changed, fueled and given the once over, and of course the bragging started. We stayed up late that night laughing, teasing and watching riding and racing videos.

In the morning, John was the first one up and was certainly the most outwardly excited to ride that day. I swear he is more like a kid than the kids are. We drove down to Portland to an awesome little café/restaurant called the Everett Street Bistro for a delicious breakfast, and were back at the “ranch” by 10 a.m., and ready to ride.

John was also the first one out on the homemade track with Peter struggling to get his gear on as fast as possible so he could join him. He did one lap of warm up and then passed us on one wheel going downhill. Peter’s dad Michael said, “I think you’ve got some competition Peter, John is on his second lap of the day and he did most of it on one wheel!” Peter was out in a flash and you could see the competitive gleam in his eye as he tore off trying to catch up to John.

Next out was Josh. It was his first time on a motorcycle after his bad crash that fractured his neck and badly broke his wrist. He was recently freed of wearing a halo and a hard neck brace and was more than ready to go. It wasn’t long before the three of them were ripping it up while the rest of us watched and took pictures.

There was a lot of laughter and a lot of friendly competition. There were pretend race starts and some daring passing. There were riding tips and suggestions given, digs at form and speed, banter and teasing, and there were even a few crashes. Most of all there were two awesome fun filled days of family riding fun in which everyone took part.

After several hours of trying to convince myself that I shouldn’t ride, I decided that if I took it easy and was careful it might just be good for me to get back out on the bike. The gear didn’t fit at all, but what the heck, I made it work and it was certainly worth it. I had a grand old time! I wonder if there really could be a market for maternity dirt bike gear? If you think about it, we had the entire age range of riders covered from a baby in the womb to a 47-year-old with various ages and both genders out on the track at different times. We were tuckered out by the end of the weekend and John and I were like zombies during the drive home.

John and I happily discussed the way it made us feel to be a part of a large riding family and how we were excited to be starting our own family. We talked about how we were going to make play and the outdoors a huge part of our child’s growing up, and we talked about what “first bike” to get him or her. We laughed about how we already had a little run bike for when our kid is big enough to start learning how to ride and I relayed to John an ecstatic phone call I had recently received from my sister.

You may remember that I did a story for Mojo last year about getting kids started in riding and how using bicycles called ‘Run Bikes’, that are without brakes or pedals, are a great way to teach kids balance and to help them transition to pedal two-wheelers with less difficulty. I used my niece and nephew as examples of little ones that were riding the run bikes, and riding them well. My sister had called recently to report that both Locklyn, 5-years-old, and Kellan, 3-years-old, are now able to ride pedal bikes without training wheels successfully, and ‘scary fast.’ I said it must be in the genes and that they are well on their way to having their own little motorcycles soon.

So, get the little ones involved, call the friends and enjoy a weekend of dirt biking fun for the whole family! Motorcycles are a great way to get everyone together, and outside!

Misti Hurst is a motorcycle racer, an instructor and a freelance writer.