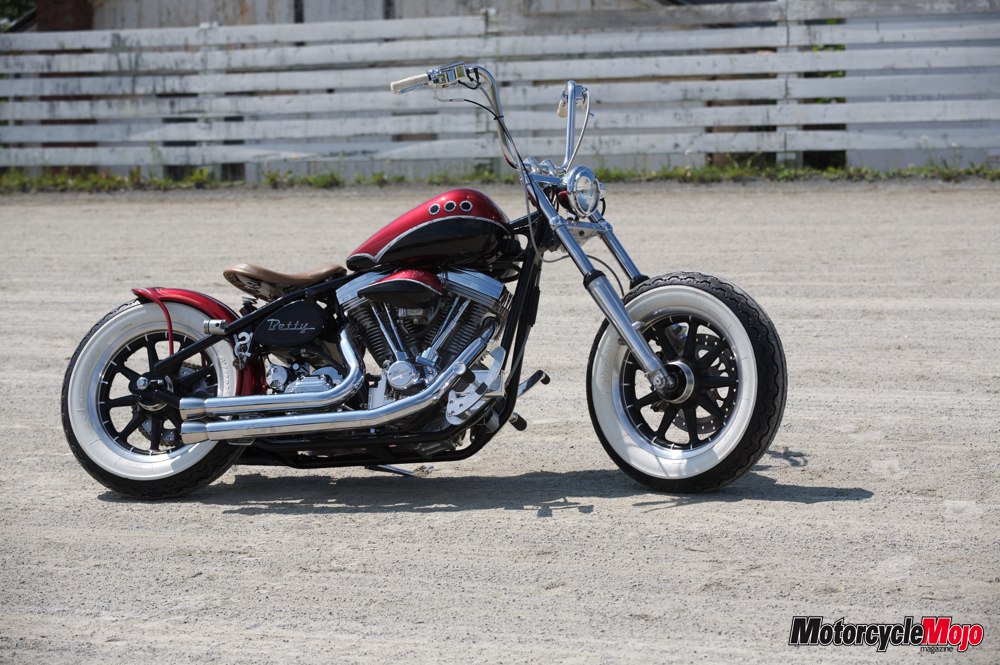 Congratulations are in order to the Bike Klub for winning the Donnie Smith Invitational Bike Show that took place at the end of March in St Paul, Minnesota. The Bike Klub took two top honours winning ‘Overall Winner’ and ‘Technical Merit’ for the Best Built Bike. The Klub was also handed the trophy for 3rd Best Overall in Open Class of Rigid Evo Chain against eight other Pro-built bikes.

You may remember reading of the Bike Klub in Motorcycle Mojo over the past few years. They are a group of high school students that participate in an after school class at the Bernice MacNaughton High School in Moncton, NB. The class instructor, Marc (Mazz) Mazzerole, voluntarily designed the course, and puts in countless hours, to help the students “have a reason to stay in school”. They build bicycles from scratch and, when funds permit, motorcycles.

They began building the Betty Bobber in the fall of 2006 and they completed it in the spring of 2008 and upon inspection, the guys and gals of the Bike Klub did an outstanding job. They readily accepted hands-on advice from professional builders Bob McKay and local builder, Luc LeBlanc, from Shediac Bridge, NB as well as tips and tricks from other industry professionals.

The Klub does have fund-raising events to help support their cause, but they readily accept, and need, donations of either cash, parts or even Air Miles to keep them going. Because the Bike Klub is an extracurricular activity, it receives no funding from the school or the school board. The Klub completely depleted their funds getting themselves and the bike to the competition.

The Bike Klub was able to raise enough cash to fly eight students, plus shipping the Betty Bobber of course, to the show in Minneapolis. The Donnie Smith show is the only competition that has high schools competing and is considered to be the World High School Custom Bike Building Championships.

There are very few courses like this in North America. The Bike Klub competed against four other high schools and while all the students must be proud, our Canadian contingent in the competition must be ecstatic, not only for being there representing Canada, but winning. This is an amazing accomplishment and demonstrates the dedication of people like Mazz, all the volunteers and those that sponsor the Klub with donations, but most of all, accolades go out to the kids that worked so hard to put the Betty Bobber together from the potpourri of donated parts to build a show winner.

Now that the Klub has the taste of a major win. Currently the Klub has two bikes in various stages of mock-up. One is a 1967 BSA 650 Lighting Bobber with a running engine, and the other is a Harley soft tail style bobber with a springer front-end (I am told they don’t have an engine but would love a Shovelhead).

It’s going to take some hard work, long hours and funding to have a new bike ready to defend their title next year, and they can’t reach their goal without help. If anyone wishes to donate anything that the Bike Klub can use, whether it’s cash, parts or expertise, they can be contacted through www.bmhsbikeclub.zoomshare.com.

Congratulations once again to everyone involved, all of you deserve it.