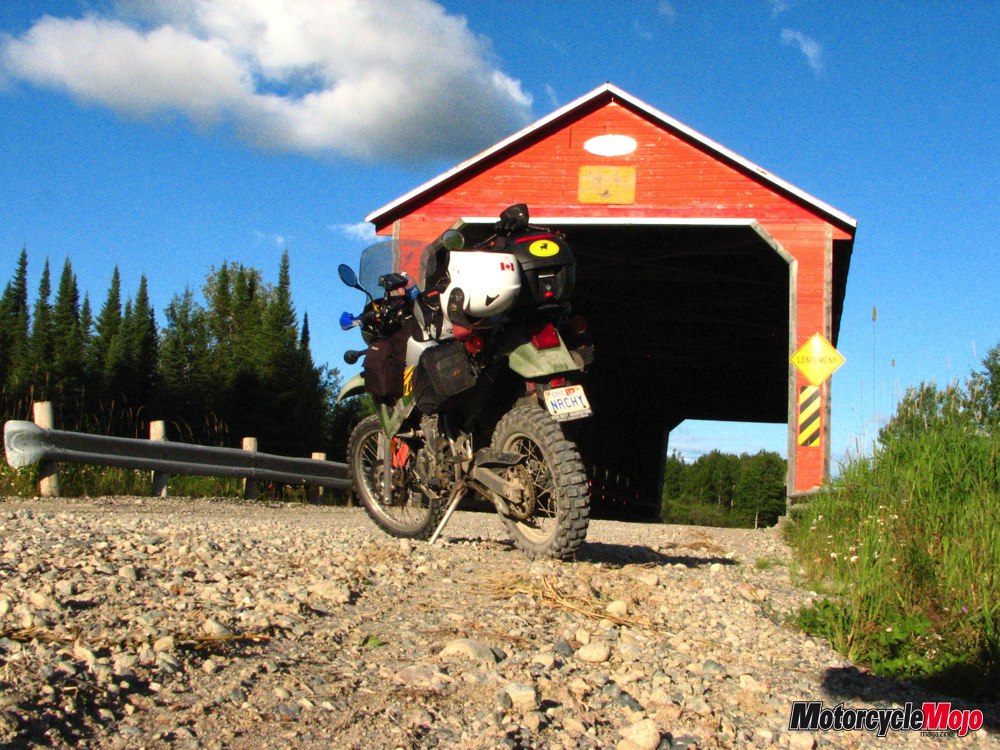 In the weeks leading up to my planned trip north on my dual-purpose Kawasaki KLR650, I found out that the Perseid meteor shower would be most visible at the point of my planned loop through the James Bay Municipality in northern Quebec. You might say that was good timing, but timing is just another word for luck.

Luck was just what I needed, as my lawn tractor decided to act up before I was able to get away, so it took longer than usual to mow my few acres of grass. That, along with changing the oil and the brake pads and replacing a faulty heated-grip element on my well-used motorcycle the night before leaving, did not bode well for my desire for an early morning departure.

Hours late, I nevertheless began my long journey with a feeling of accomplishment just for having gotten underway. My confident attitude was soon whipped and beaten by the high winds and massive columns of black clouds that lay between me and riding bliss.

If you were following behind me and squinting through the sheets of rain, you would have seen me shaking my head as I pulled over just an hour and a half north of my home in London, Ontario to don my heated layer. I wasn’t supposed to be using heat until I was in the lee of the Arctic waters of James Bay, many long kilometres to the north. Despite the rain, I still managed to enjoy the ride north, especially the undulating 10th Sideroad through Mulmer, entering the Niagara escarpment on the way to Barrie.

At Bracebridge on Highway 11, I had had enough rain and wanted to call it a day. I called to a dozen hotels and motels looking for an available room. Everything was booked across a large radius on the map due to the nearby dragon boat festival. I pushed on to North Bay and checked into a motel by midnight. My cold thighs and wet hands begged for warmth, but the hot water heat of this budget number wasn’t running yet. It was only mid-August, but someone forgot to tell that to the thermometer.

The following morning I left the rain behind and continued north into much-appreciated brighter skies. My destination road with the descriptive moniker—Route du Nord—is a dirt and gravel corridor used for logging and mining. It heads out of Chibougamau in central Quebec and runs through lonely expanses of Quebec wilderness north and west to the base of James Bay.

I had much ground to cover before I got there however, and wasn’t exactly riding a mile eater. While sometimes frustratingly slow, my chosen roads— the smallest lines that I could find on the map—rewarded with an entertaining mix of scenery and solitude unobtainable via faster routes.

Two such gems were graveled routes 395 and 397 near Amos, QC. These old roads were a rough reminder of what awaited further north. Wildlife, in the form of a moose and a few porcupines, kept me company while I got reacquainted with the loose feeling of riding on poorly maintained and little-used routes.

I stopped for an extensive break to snack and lube the chain at a covered bridge. For well over half an hour, not a single vehicle came by, allowing me to enjoy the sound of the wind in the trees and the silent ebb of the gently flowing river.

Not wanting to leave this forested paradise, but with sunset looming, I was forced back on the bike in search of a place to set up my tent. A lucky glance through the trees a short distance from the bridge revealed the roof peak of a small building. Finding a short trail nearby, my knobby Dunlop D606s took me, sure footedly, to a humble hunting camp tucked into a small clearing. I pulled out my sleeping bag and pillow and laid down to sleep on one of the mattresses inside.

Scratches on the door indicated that some sizable creature had attempted entry. Forced by the call of nature to leave the camp after midnight, I assured myself with the help of my flashlight that it wasn’t making another attempt on this night.

Well rested by morning, I shoved off for Chibougamau, filling my old gas can, which I had brought from home to prepare for the desolate Route du Nord. It soon became evident that this insurance policy was not the ideal solution. The cap, while fine resting on my garage floor, dribbled fuel all over the bike while in motion. The good news is that I bought a new, larger plastic can in Chibougamau and filled it just halfway. The bad news is that the larger gas can cut into my space on the KLR’s seat and limited my range of motion to an uncomfortable degree.

Stopping for a photo at the junction of the Route du Nord, I felt a tinge of butterflies. This was one of the most remote roads in North America, with over 250 km separating me from the next available fuel.

The smooth quality of the road immediately impressed me. However, after I passed a grader, the decent road surface transformed into rocks, ruts, and washboard. It only got worse further in.

It was déjà vu and very reminiscent of my ride on the Trans-Labrador Highway a few years ago, when I discovered that I was the slowest vehicle on the road. The others were trucks of various descriptions driving at well over the posted limit of 70 km/h and stirring up blinding dust clouds that looked exactly like their Labradorean counterparts, accompanied by similar networks of humming and snapping high-tension power lines.

What was it I liked about riding these roads again? Oh yeah—the solitude and the scenery.

I found one of my goals of the trip in the middle section of the Route du Nord where I encountered the magnificent rapids of the Rupert River. Photographing the rapids was one of my hopes while on this ride. The construction of a nearby series of dams designed to harness the waters of the river in this vicinity will mean an end to the rapids once water is diverted to the new hydro generating facility.

With the roar of the rapids receding into the distance, I began to focus my thoughts on the Perseid meteor shower. This would be the night that the meteors would be the most numerous and provide the best visibility. I stopped to gas up in the Cree community of Nemiscau, which is located about two thirds of the way down the Route du Nord from Chibougamau to its end point on the paved James Bay Road.

I could have eaten at the restaurant, but I had had a nice snack while viewing the Rupert River rapids, and I didn’t want to delay any further. I wanted to get as far from the community’s lights as possible by nightfall. Over an hour out of town, I found another hunting camp not far from the road. Before I made it that far, however, I had to stop briefly to repair the GPS mounting bracket, which had tossed my luckless Garmin onto my lap.

I crawled into my sleeping bag, once again comfortably installed on a mattress. I felt pleased, as the best I had hoped for going into this trip was a Thermarest insulating me from the cold ground. I dozed off well before dusk, setting my watch alarm for 2 a.m.

I woke up near midnight, shivering in my three-season ultralight sleeping bag. The temperature on that clear night, close to the cold waters of James Bay had dipped well into the single digits. I rummaged around the cabin and found a thick wool blanket and immediately felt warmer. In my tent, I would likely have been pulling on my riding suit to stave off hypothermia.

At the designated hour, I dressed by flashlight in the overwhelming blackness of my shelter. I didn’t really want to wear the bug jacket outside since it would interfere with my view of the sky, but the previous evening’s blackfly bites were still fresh in my mind, and under my skin.

The sparkling canopy of stars was a rare sight indeed. Many more stars were visible in comparison to the night sky above my rural property outside London.

Throwing caution to the wind, I unzipped the hood of the bug jacket and began to scan the sky. The blackflies seemed to be off in search of fresher meat, and I was free to gaze into breathtaking infinity. It wasn’t long before I was rewarded with a number of speeding streaks of light in the eastern sky. They came a minute or two apart, each a fleeting demonstration of the phenomenon.

Standing there in the near-tundra of the largest municipality in Canada, and watching the cosmological light show unfold left me feeling small and humble. The hair on my arms stood up, and I felt myself shivering from the sight. Or was it the cold? I had been outside for perhaps 15 minutes in jeans and a button-up cotton shirt, head in the sky, until my discomfort brought me back down to earth and back into the shelter of my sleeping bag.

In the morning, I finished off a bag of chips and a stick of pepperoni for breakfast while a loudly persistent chipmunk stayed close, hoping for a meal. As I gulped down the last of my water, I realized that I was a long way from my next meal. I also realized that I was in desperate need of washing, having skipped a shower in North Bay and sleeping in the woods for a few nights. That might be the reason for the blackflies leaving me alone the night before.

The road seemed to be somewhat worse on the western end, with a profusion of large rocks the size of a baby’s head both on the surface and embedded in it. There were plenty of grader-sized holes filled with sand, invisible until entry was imminent. Plowing into the deep sand nearly always pushed the bike a few degrees off the straight ahead, inducing a weave as I popped over the ridge and out of the hole with barely enough time to stand on the pegs. The sharp gravel demanded a great deal of attention, requiring that I scan for the one rock that might sneak past the deep lugs of my Dunlops to tear at the carcass.

I felt a slight sense of loss when finally the Route du Nord met up with the paved James Bay Road that would take me south and home. A short distance later, a sign indicating a boat launch drew me to a large lake with the promise of a much-needed bath — my breakfast could wait.

At the base of the James Bay Road in Matagami, I finally re-entered civilization with my first real meal in almost 36 hours. Heading further south, I rejoined the rain I had left behind days earlier.

In southwestern Ontario the next day, I was riding through an intersection under construction in London. Full size pickup trucks like those that roared down the dusty and rutted Route du Nord at 100 km/h were slowing to a crawl so as not to kick up any dust onto their polished flanks as they traversed the smooth dirt awaiting new pavement.

No doubt about it, I was back.

Check out more of Thane’s adventures at www.silliker.ca or contact him at tsilliker@yahoo.ca

Thane was bitten early by the long distance riding bug and competed in his first Iron Butt Rally in 2001 on his Honda ST1100, where he finished in 32nd place with a gold medal. He rode the Rally again in 2005 and finished in 25th place, again with a gold medal, and has been selected to once again ride the Iron Butt Rally in 2009. He holds the record of 59 hours 51 minutes for riding across Canada, from Halifax to Vancouver.