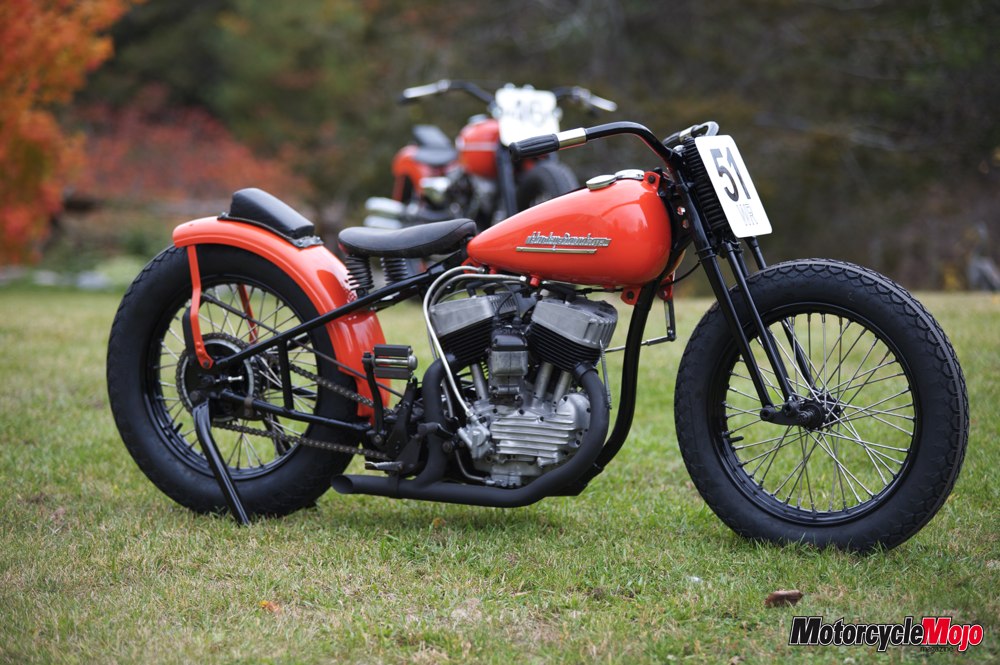 Both of these bikes featured here serve a purpose in Bob McKay’s mind, one is a legend from the Canadian vintage racing scene, and the other is just a fun road-worthy bobber project to imitate the antique flat tracker.

For those who don’t know the name Bob McKay, he is one of Canada’s best-known bike builders. For well over thirty years, Bob has been wrenching professionally and building bikes that have appeared in many magazines worldwide. He has built hundreds of engines over the years for the American V-Twin market. So with all that experience, to say he has never been inside a WR race bike engine sounds a little absurd.

Bob heard about a bona fide WR for sale through the grapevine, and after working on so many different Harley engine configurations, he just couldn’t pass up the opportunity to rebuild the race bike back to its former glory.

The WR models were never available to the public and were the Harley-Davidson factory purpose-built race bikes from days gone-by, making them fairly rare in their day, and especially rare today.

This 1951 WR served as a Southern Ontario hill climber in its past life and from what Bob can figure out, it last saw action in 1964. This last race campaign date was determined after calling the phone number on the remaining piece of a bike shop decal that had actually become one with the fender. The gentleman that answered the phone just happened to be part of the race team, but didn’t remember a lot about the bike.

It was in pretty tough shape cosmetically when Bob took possession of the bike, but it did run after applying a little coercion. A quick rundown of the bike’s visible components revealed it was pretty complete with original parts, unlike many race bikes of that era that were bastardized with homemade pieces which were quickly made to repair the bike and get it back into the race.

After a complete teardown of the bike and the driveline; Bob repaired, welded and rebuilt everything that needed attention. Being the perfectionist that he is, Bob found it a little difficult to rebuild the engine to the race specs. “To rebuild this engine was kind of weird to do because you’re rebuilding to worn out specs. Race engines are built to run fast, but for only for a couple of races and then they’re rebuilt again, so they’re built loose to begin with,” Bob said.

After researching the WR series of bikes, Bob realized that a WR motorcycle was a race bike, period. It didn’t matter what type of racing it did, so in keeping with the heritage of the bike, he decided to forego the hill climber version and make it a flat track racer instead, liking the style a little better.

In fact, he liked the style so much he decided to make a bookend to the WR in a more modern street legal version. Taking a 1978 Shovelhead driveline he had kicking around the shop and pairing it with an aftermarket FL frame, he wanted a street rideable track bike that looked old. “It’s designed to look like it came from the 40’s or 50’s.” Bob said, “This one, with the tank emblems and the way we laid it out, looks like a 1946. I even went a little extreme and built a manifold for it so I could use an old brass Linkert carburetor. The bike actually idles and sounds like a Panhead with that carb on it.”

Although Bob will admit that everything is for sale, but for the time being he is content with having an original legend to grace the corner of his shop, and the bookend bobber to grace the country roads around his home.