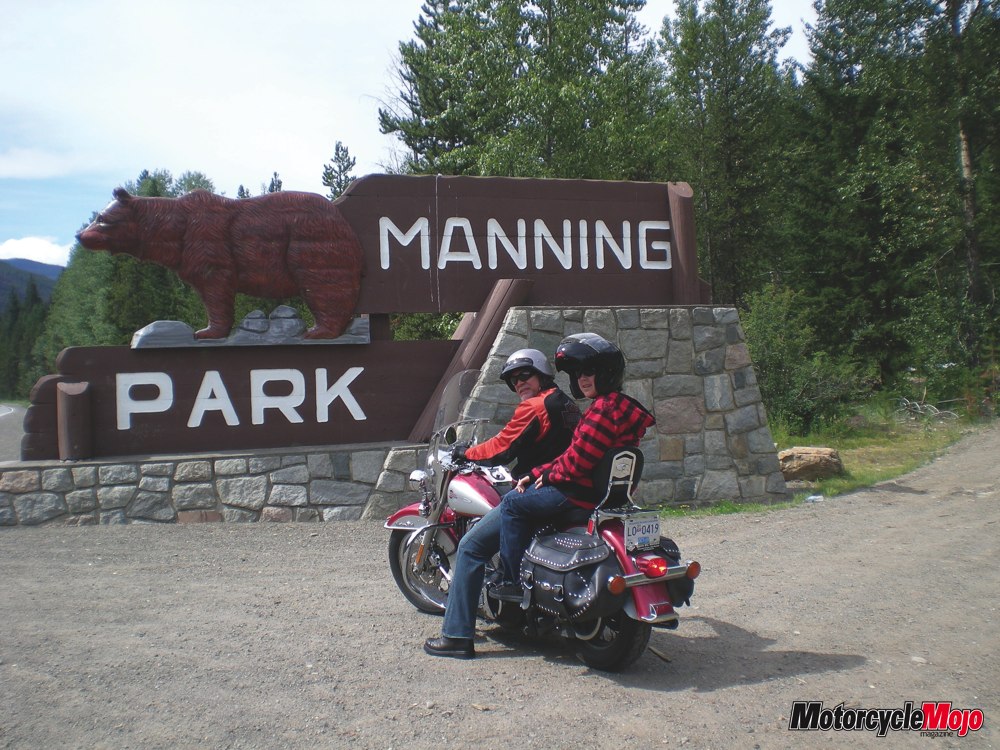 “So, how about we vacation Western Canada this summer?”, my wife suggests. She begins to describe how we can fly to Calgary, rent a van and drive to Banff, then Lake Louise, followed by a stretch through the Okanagan Valley en route to Vancouver. I am thinking, two teenagers in a van with their arsenal of electronic gear like mobile phones, iPods, Nintendo DSs and Game Boys, and when they are not occupied with these, they would be either sleeping or complaining that they’re hungry. I approached the question in a positive light with a potential motorcycle ride in the mix. As last year, I thought, OK, how can I get a motorcycle ride in this year’s plan? (Last years vacation included a motorcycle ride from Las Vegas to Red Rock Canyon, Lake Mead, the Hoover Dam, through parts of the Mohave Desert and looping back to Vegas). Without hesitation I plotted a Google map route and realized that the entire route made for a perfect bike ride. Considering, the closest I ever got to ride a motorcycle in the mountains were the rolling hills of the Niagara Escarpment, Hockley Valley, and the Blue Mountains all close to home, experiencing real mountain vistas sure sounded good. My exuberance quickly hit reality when I imagined 12-days, a wife, two teenagers and travelling over 1,000 km together. So my final plan included a balance of family time and riding time. I plotted a route that included 455 km of great views and some of the best motorcycle riding roads in Canada. I wanted to experience at least part of the Rockies on the bike, so the plan was to depart from Kelowna and travel to Vancouver.

Kelowna is the primary city in the Okanagan Valley and home of the legendary Ogopogo Monster—Canada’s elusive water creature found in Lake Okanagan. It rivals Scotland’s famous Loch Ness Monster and even after a glass or two of the regional wine that the area is famous for, I must confess that I did not have an Ogopogo sighting.

The region is known for its dry, sunny climate, arid landscapes and lakeshore communities. Agriculture is focused primarily on fruit orchards, with vineyards and wine making becoming even more popular. In fact, while on a vineyard tour at Mission Hill, the calm arid temperature resembled a day in the Napa or Sonoma Valleys in California.

Dave at Cycle BC was accommodating by arranging the delivery of a Harley-Davidson Heritage Softail to the hotel we stayed at in Kelowna a day prior of the ride. Ride day started out beautiful, with clear sky and temperatures in the mid 20°C. Weather conditions that fellow Ontarians would appreciate considering the amount of rain experienced in the summer of ‘08.

From Kelowna, I crossed the new W. R. Bennett Bridge that connects the east and west sides of Lake Okanagan. The traffic lightens-up and the road continues as Highway 97 hugs the western portion of Lake Okanagan’s coastline showcasing great panoramic views of the lake on my left and rugged mountainside on my right. Through the fruit growing regions of Peachland and Summerland then continuing to Penticton, the road lived up to its promise of smooth sweeping curves and great riding conditions in a gradual descent to an arid desert-like environment towards the southern portion of the province. Humming along Highway 97, unbeknownst to other travellers, mostly in their RVs, from my rear view mirrors I saw the rest of my family trailing behind in the SUV. I was wondering how my wife was fairing-out, negotiating the descent, which at times included some tighter than usual curves on a decline to the lower Okanagan Valley. I was sure to hear a few words at the rest stop.

I got my first sense of the Rockies on the V-twin en route to Keremeos when I took the Highway 3A cutoff to connect to the infamous Crowsnest Highway (Highway 3).

The valley town of Keremeos, self-titled as “the fruit stand capital of Canada”, greeted us with all sorts of soft fruit and vegetable stands offering their bounty grown in the South Similkameen Valley. More importantly, it was time for my 13-year-old son, Lucas, to hop on back, enjoy the rumble of the motorcycle, and experience the outdoors without a Nintendo or Game Boy in hand. I am sure that the experience of riding together is something we will both never forget.

Speaking to the helpful staff a day earlier at Kane’s Harley-Davidson in Kelowna, they advised me to ensure I had a full tank of gas while riding the Crowsnest Highway as no gas stations can be found between Princeton and Hope. I fueled-up in Keremeos and topped-up again in Princeton, just in case.

The Crowsnest Highway begins in Hope at the eastern end of the Fraser Valley and runs east through the Kootenay Rockies, the Cascade Mountains and Manning Provincial Park, across the desert-like southern Okanagan Valley, including Princeton, Keremeos, and Osoyoos, and ends some 777 km away, as the crow flies, in Medicine Hat, Alberta.

My route included catching the “crows route” from Keremeos, which uncurls across the varied topography of southwestern Canada. The ride dives into the first of the many switch-backed creek crossings that complicate the ascent to Princeton en route to Manning Provincial Park. The route enters rolling mountainous areas with densely wooded slopes and canyons.

In the stretch between Hope and Princeton, known locally as the Hope-Princeton Highway, there are several significant ascents and descents. Cyclists and motorists alike find this stretch of road difficult because of the steep grades and high altitudes.

The first steep climb is from Princeton to Sunday Summit at 1,284 m, (4,213 ft). I could feel my son on the back holding tighter as the road continued with a series of switch-backs and steep curves that ascended again to the summit of Allison Pass 1,352 m (4437 ft). Allison Pass is the highest point on the highway between the cities of Hope and Princeton. It is located in the middle of Manning Park, approximately 54 km (34 miles) from Hope.

The road continues through the Cascade Mountains to Hope Slide, one of the largest landslides ever recorded in Canada. In 1965, the southwestern slope of Johnson Peak collapsed completely, displacing the lake below with incredible force, throwing it against the opposite side of the valley, wiping all vegetation and trees down to the bare rock, then ‘splashing back’ up the original (now bare) slope before settling.

Travellers make this memorial site a rest stop. Viewing the massive size of the slide first hand, only then can you truly appreciate the hopelessness of anyone caught in its path.

The “Route of the Crow” then descends to Hope, where it branches off to Highway 1. It did not come to me until much later, but leaving the Crowsnest Highway was like saying goodbye to a good friend, ‘can’t wait to see you again’.

The District of Hope acts as the gateway to the Lower Mainland. Established over 150 years ago as a fort and then later developing rapidly during the gold rush of 1858. My son had been patient for almost four-hours on and off the bike so a lunch at one of his favourite fast food restaurants was in order. During the break, I was able to contemplate the ride thus far and look over the road map to decide if I should take the faster route Hwy 1 or the scenic route Highway 7 as my final stretch into Vancouver. After discussing the options with my wife, she mentioned any route so long as it did not include any further steep ups and downs. So, after a stretch, a fuel-up, and a burger and fries we were off again, this time solo for the final leg to Vancouver.

I opted to take the road less travelled—scenic Highway 7, known as the Lougheed Highway. It is an alternative route to Highway 1 through the Lower Mainland. Whereas Highway 1 follows the southern bank of the Fraser River, Highway 7 follows the northern bank. Highway 7 is a comfortable ride with rolling hills and wide curves through fertile farmland and dairy farms, a complete contrast to the clutch / gear control and push-steering techniques you’ll master through the Rockies. Riding through the Valley one can enjoy the incredible beauty of coastal mountainous vistas and natural forest settings to the north overlooking the lush Fraser River Valley and the Fraser River to the south.

The human and automobile populous began to get greater signaling the approach of my final destination. Travelling through the tiny old town of Mission and then through Maple Ridge, known as the horse riding capital of BC, and then Coquitlam, I noticed that the skies above were closing in and the wonderful sunshine turned to a light rain typical of the Pacific West Coast. The light sprinkle did not last long; in fact before I knew it, I was in Vancouver.

I now trailed the GPS enabled, wife navigated SUV through the Vancouver roadways to the Cycle BC Vancouver office where I delivered the trusty Softail. We have been travelling now for just over eight-hours and we are all a bit tired, but for me it brings a bittersweet feeling. The ride part of the vacation plan was now officially in the books. Father-son bonding created memories for not just my son and I, but also captured precious moments in time. Moments in time that my daughter and wife can laugh about while watching the video they took of my ride while tailing behind me in the comfort of an SUV, and picture postcard moments of the incredibly beautiful Canadian landscape.

Now my attention changed to checking into the hotel, enjoying a delicious pacific salmon dinner with my family and chatting about our plans while in Vancouver…the ride, our plans while in Tofino in a couple of days…the ride, the fireworks show later that evening…and did I mention? The ride!
Angelo Perri is co-owner of MHz Design Communications, Chair of B.A.D. Ride XII, and a motorcycle enthusiast.