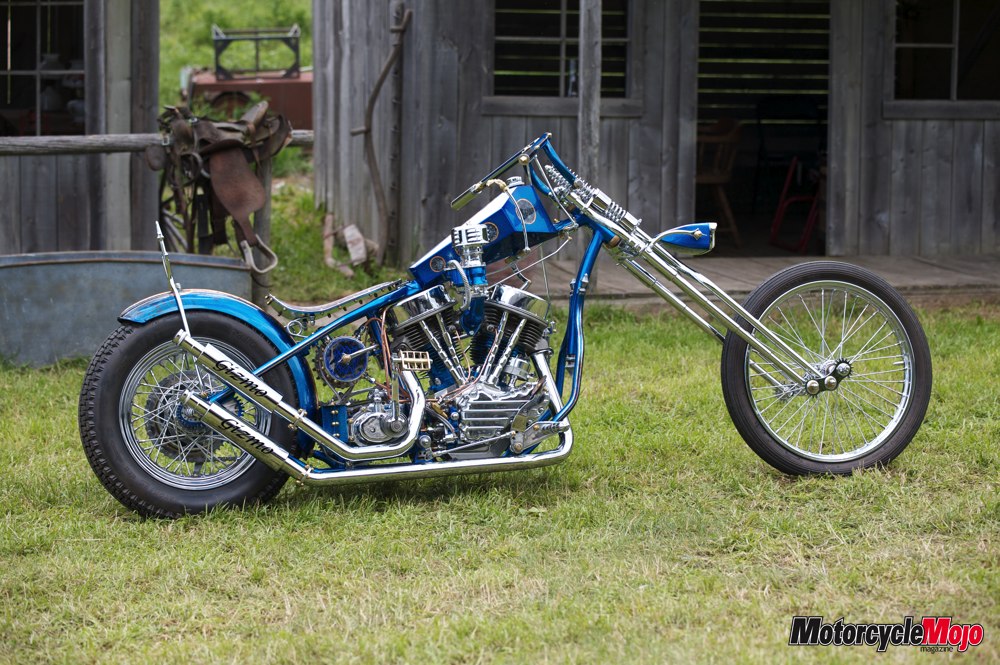 Remote door openers, alarm systems, electronic ignitions, MP3 players, PDAs, camera phones, Blackberrys, Bluetooth, the list goes on…the world is full of colourful gadgets and gizmos. But none are as interesting as good old mechanical gears, linkages and joints. They form the basis of the ‘machine’ in its simplest form. Early motorcycles were proof of this. Next time you are lucky enough to see a ’20s or ’30s English bike up close, pay attention to the many linkages and joints throughout the bike. They are simple by today’s standards but so entertaining as you try to figure out how they pull and push other doohickeys to make the thingamajig activate the whatchamacallit. The intricacy could even be construed as works of art.

One gizmo that has all the makings of an entertaining look and is undoubtedly a work of art in itself is a bike that’s actually called Gizmo. I met up with Gizmo’s owner and builder, Charlie Sundal, while he was cleaning up thousands of beer cans after his entertaining Western Town Smoke Out. Charlie and his brother Ernie, simply known as ‘The Twins’, together built a western town in the ‘back forty’ of their property and they have a hoedown a couple of times a year. You know the scenario; bikes, bands, beer, BBQ, bike games, beer, bike show, babes, beer and a bedroll, if everything works out as planned.

Charlie got the idea for Gizmo after watching Indian Larry on TV and Larry, being the mechanical person he was, said, “Where’s all the gadgets and gizmos,” commenting on how so many builders of the day try to hide everything. That single comment got the gears in Charlie’s head turning and with the help of Ernie, they began to make a bike so mechanical, it doesn’t even use cables. Gizmo has enough levers and gears to make even Inspector Gadget’s head spin.

While the bike doesn’t get much road time, it all works as designed once you disregard everything you know about riding and reprogramme your brain for a whole other set of rules concerning hand-foot coordination.

Other than having the vision of everything mechanical in plain sight, the build came about without a real plan. While Charlie did a little more of the work (after all, it is his bike), this bike is almost all hand-built by the Twins. Starting out with a 1958 Panhead engine and transmission, they manufactured the frame around it and hand-built the springer front-end to create the rolling chassis. After that, every finicky detail is hand-made including the unique series of linkages that operates the throttle and the clutch mousetrap. I asked Charlie, “How long did it take you to make the throttle and clutch linkages work?” “About a case of beer”, was his response. Since I barely know the man I don’t know how long that is, but I suspect it went together fairly quickly.

The Twins took Gizmo to The Rats Hole Show in Daytona during the 2007 Bike Week where it competed against bikes from all over the world. Gizmo came in 4th place in the ‘Over 1000 cc Radical Class’. Not too shabby for a bunch of old gizmos, gadgets and doohickeys!