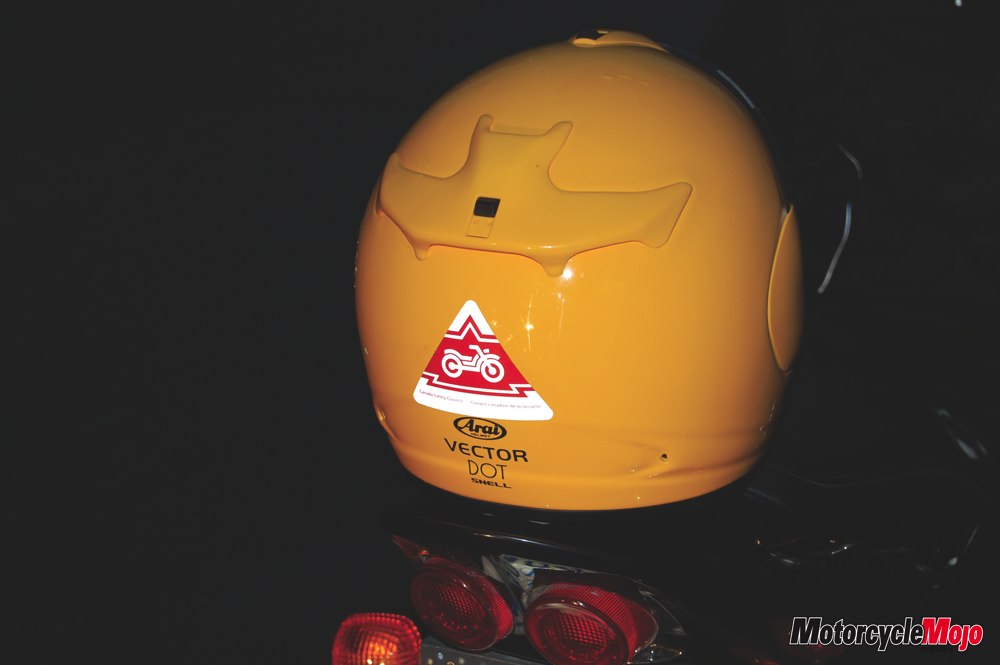 John was riding along at 60-plus km/h in a 50 zone. He was in the right tire track of the left lane heading east. It was late afternoon on a nice fall day. All of a sudden an approaching car swerved right in front of John cutting him off. John remembers hammering the rear brake and the bike sliding before hitting the rear door of the car. The sail over the car was graceful, but the landing was ugly. Despite the pain, John remembers the offending car driver’s first words. “I didn’t even see you”.

If you ride long enough in traffic, there is a good chance that you will eventually hear those words. How can we minimize the risk and enhance being seen?

Providing you took the two-day ‘Learn how to ride’ programme, your instructor’s advice was:

1) Dress in conspicuous colours. Are you dressed in black on a dark bike on a dark road surface? We all want to look good while riding, but don’t let vanity kill you. Road traffic signs and construction workers wear yellow safety vests since yellow is the most visible colour to our eye. I know what you are thinking, ‘like I am going to ride with a geeky safety vest on’. Well, do you like hospital food? You can buy conspicuity vests that are not yellow. The vests still have a retro-reflective surface that seems to light up when lights hit it.

2) Ride as if you are invisible. Expect to get cut-off and be sure to leave yourself an out. Don’t ride in the blind spot of other road users.

3) Slow down and move to the right at intersections. You are further away from the offending cars that turn left across your path. Plus your headlight movement when moving to the right side of the lane may be enough to help the oncoming driver see you.

How about our bikes? A trend with sport bike riders is to make them look more like race bikes by cutting off the rear fender and removing the stock turn signals. Riders often replace the larger stock signals with thumbnail sized signals that mount flush with the body panels. The idea of a turn signal is that it sticks out away from the bike and is large enough to be seen in traffic.

My joke is, ‘I don’t care if the car driver has to stop and throw-up when they see me. I just want them to see me.’ I wear a very bright yellow helmet, a conspicuity vest and I put the rear turn signals back on the used bike I bought. The previous owner made a neat light bar for a brake light and turn signals, which I kept on. The lights at the back are now better than stock. On another older bike I own, I wired the turn signals with running lights. Instead of a single filament bulb, I wired up a double filament bulb that would always be on but flashes on the brighter filament with the turn signal. Four lights in traffic are better and more visible than two.

Is dressing in bright colours and putting more lights on your bike fool proof? No, absolutely not! Police, fire and ambulance vehicles with sirens and flashing lights still get cut-off by inattentive drivers.

Here are a few more to be-seen tips to consider:

A) Ride as if other drivers don’t see you. In court the right of way might be yours. In physics, it is the right of weight. Even a Smart car is bigger than you and your bike. It’s basic math and you will lose in any traffic fight with other road users. Give the right of way, don’t take it.

B) If you already have a dark bike and riding gear you can brighten it up with some retro-reflective tape. If you don’t want the back of the school bus type tape on your bike or body, then look for some cool stickers or patches that are retro-reflective. You can even buy helmets that have lights on them to show traffic you’re stopping and turning intentions.

C) Ride with others. A single rider is harder to see than a group of them. Put the guy you like least at the front of the group. Hey, that’s where my friends always ask me to ride.

D) Play the mental game of trying to predict what other traffic might do. If that guy cuts me off…where can I go? What can I do? Even in parking lots, assume when you see brake lights in parked cars that the reverse lights are coming on next. Does the driver see you?

I was stopped at a four-way stop once, waiting my turn to go straight. A car opposite me was also stopped. I got there first but knew to wait to make sure the car wasn’t going to move off as I did. The driver waved me on so I moved off. Just as I began moving, the driver turned left across my path cutting me off. He stopped and I asked him, “didn’t you just wave me on?” He replied “No! I didn’t see you and I was swatting at a mosquito in the car.” Now I wait at stop intersections and don’t move if the approaching or intersecting vehicles wheels are moving. I don’t trust hand gestures, eye contact, flash of the high beams or the thought that I have the right of way.

Always be aware and keep your eyes open, never let down your guard. MMM