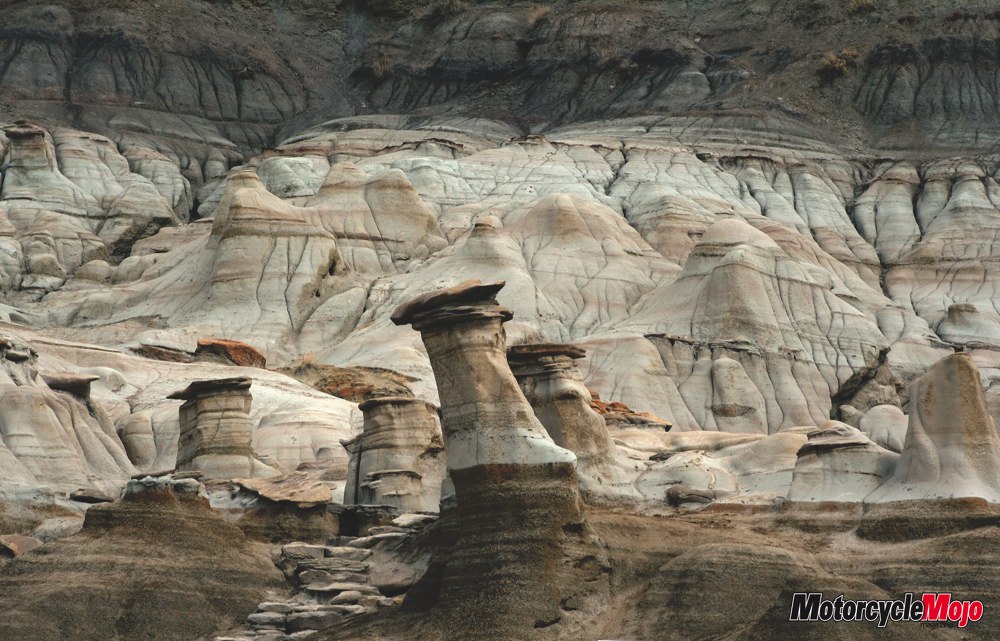 We had been growing weary of doing the same day trips to the same locations just outside of Calgary and had decided to spend a portion of the summer investigating ghost towns in southern Alberta. Thanks to a great website (www.ghosttowns.com) we were able to locate a few which still had visible remnants of the history which had been left behind. Many of southern Alberta’s ghost towns are the remains of a coal industry that nearly died in the mid-1900s, and they can be found all over the province. Armed with that information and the original GPS (a map), we set about doing several weekend day-rides to visit the homes of the early settlers of Alberta.

In September of last year, we set our sights on the Canadian Badlands; a region known more for its dinosaurs and fossils than forgotten mining towns of the late 19th and early 20th centuries.

From Calgary, there are many routes to take to the Drumheller region. One of my favourites is to head north of Calgary on Highway 2 for 57 km to the Didsbury exit (Provincial Hwy 582) and drive east 74 km. The two-lane road is relatively straight, in good condition and tours you through southern Alberta farm and ranchland, dotted with the occasional pump jack oil well.

We turned south on Highway 837 for 13 km and followed the signs to the Bleriot Ferry. If this is your first trip through this area, you’re in for a surprise. Within a few miles, the ground literally opens up and the prairie we’ve been riding on has disappeared. Before us stretches an immense canyon. At the bottom of the canyon, a mud-bottomed river carves its way through the valley and leaves its marks along the valley walls exposing millions of years of erosion. The steep canyon walls are striped in the reds, browns, whites and yellows of settled sand, silt and mud that have hardened to form rock over the millennia.

From the canyon floor on the banks of the Red Deer River, the ride from the Bleriot Ferry is a nice five-kilometre ascent to the top of Horsethief Canyon. If the ferry is closed, continuing on Hwy 837 is a good second choice to follow all the way into Drumheller. The road from the ferry becomes Hwy 838 and gives you a relaxing tour of the eastern shore of the river while its sister road, Hwy 837, winds across the western banks. Highways 838 and 837 form a loop called the Dinosaur Trail, originating and ending in Drumheller. If you get the chance, take both.

The roads wind and twist gently on the way down and it’s hard to keep your eyes on the blacktop with all of the scenery you’re passing. The ground down here is dry with desert vegetation occasionally visible through the dust-like surface. Tumbleweeds, cactus and burnt grass can be seen mixed with the occasional shrubs and trees.

When you think of the Badlands in Alberta, you typically think of Drumheller; a town of nearly 8,000 people which houses the world famous Royal Tyrrell Museum of Paleontology showcasing Canada’s largest collection of dinosaur fossils.

Millions of years ago, this was a flat region with near tropical weather that bordered on the Bearspaw Sea. While this region is no longer flat, it still has some of southern Alberta’s warmest summer temperatures and has a desert-like landscape. Summers here can be hot and dry. Some of the same animals can be found here as you’d see in Arizona and New Mexico. It is not uncommon to see antelope and rattlesnakes in this area.

Fossils have been unearthed to show that this region was a very popular area for dinosaurs. After the Ice Age, and the kilometre thick glaciers melted, what was left behind was the Red Deer River Valley; a valley that exposes the history of this region in the striations and layers of rock that are clearly visible in the faces of the hills.

Before heading further east for the towns that really brought us here, a photo in front of the world’s largest dinosaur statue in downtown Drumheller was a must.

From Drumheller, we followed Hwy 10 east for 12 lazy kilometres and found the town of Rosedale. Riding through this valley can definitely give you the sense that you’re in a large bowl, as the ground rises up on either side of you, tall hills shielding you from the lands above. Before continuing further, we made a brief stop at the large suspension bridge in Rosedale that leads across the river to an abandoned mine.

Eight-kilometres south from Rosedale is the town of Wayne, once a thriving coal town with a population of nearly 1500 souls into the early 1930s. In the early 1900s, Wayne was only accessible by train and that limited access made it a popular hideout for those running moonshine during Alberta’s period of Prohibition from 1915-1923. In its glory days, Wayne was once home to a theatre, school, several stores and a hospital. Since the mines closed in the late 1950s, Wayne’s residents have dwindled to an estimated 30 people, and it’s all but a ghost town now. What remains of the town are the Rosedeer Hotel and numerous empty structures scattering a scenic 6.5 km drive. We crossed eleven wooden plank bridges as we wound our way through a valley containing prehistoric secrets in its hills of layered sand, silt and mud. The road itself is in good condition with narrow gravel shoulders. While the road is not long, it was twisty enough to keep our eyes focused ahead helping resist the urge to gaze at the canyon walls surrounding us. The Rosedeer Hotel is still open to serve great food and cold drinks to those who visit and its walls are decorated with photos of the town that it used to serve.

Wayne is a popular biker friendly stop in the summer, so expect a good amount of bike traffic to and from the Hotel, especially on weekends.

To finish our day’s ghost town hunting, we left Wayne and continued southeast on Hwy 10 for nearly 40 km through more former coal towns until we found the town of Dorothy. Be sure to leave time to stop at the Hoodoo Recreation Area, a must-see natural attraction on Hwy 10.

The highway between Drumheller and Dorothy was quiet and we were able to lean back and take in the surroundings under the warm sun. The road offered a smooth surface leading us through gentle twists mixed evenly with straight stretches as it hugged the banks of the Red Deer River. The road sweeps back and forth, almost letting you get yourself into a steady rhythm as you lean from one side to the other. Once again, we were surrounded by the valley walls on both sides. The floor around the river is dotted with the occasional house, old barn or abandoned mine building. The views around you, allow you to almost forget that you’re riding in the prairies. While we didn’t see any this time, it is not uncommon for there to be deer in the fields and ditches, so we couldn’t get too comfortable.

It is very easy to breeze right past and miss the single sign that points to the north side of the highway – marking Dorothy. With all of the spotty buildings and remnants, the town barely stands out at all until you follow the short gravel road that’s nearly grown over with long prairie grasses.

Dorothy is possibly one of the best-preserved ‘ghost towns’ in Southern Alberta and people are free to walk around the buildings and the area. Dorothy enjoyed its greatest prosperity in the early 1920s when a railroad was built through town. In that time, you’d have found a post office, butcher shop, pool hall, grocery store, restaurant, three grain elevators, machinery shop and a telephone office. There was a school built in 1937 and there were two churches. The school closed in 1960 and the churches soon after. There are currently less than a dozen residents in this town that once boasted a population of slightly less than 100. The two churches are among the remains left from the early 1900’s that also include abandoned homes, one grain elevator, a store and a community hall. The paint has faded with time and from the elements, but the structures still stand as a reminder of what once was. While time has gradually taken its toll on these turn-of-the-century buildings, it has been gentle in doing so. Much remains behind and the structures are relatively free from vandalism.

On our visit to the town, we met three gentlemen who have taken up the cause of restoring the old church and schoolhouse. They are battling the effects of time and weather on these old buildings and are doing this on their own as time permits and free of charge.

On behalf of everyone who visits this area, I’d like to thank these men for doing so.

Often there is far more to see by heading just off the beaten path and avoiding the traffic at the tourist traps.