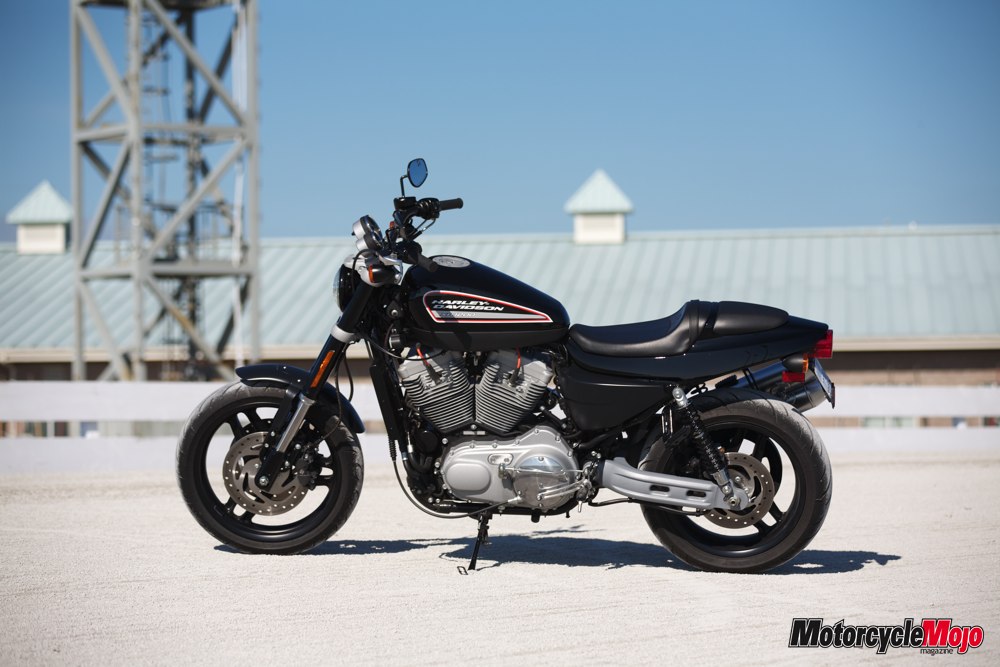 Rumour had it that Storz, a California company that specializes in performance and cosmetic upgrades for Sportsters, owned the name XR1200 in North America and therefore the Motor Company couldn’t use it on this side of the pond. Harley-Davidson did, however, acquire the rights to use the name and it was then announced at the end of 2008 that the XR1200 would be released on these shores. And once again the crowd went wild!

Due to all the hype in Europe about the newly designed Sportster, and all the pent-up demand for the XR in North America, hundreds of orders started pouring in when the announcement was made that the hot rod would be released here. This was even before Harley had a chance to really promote the product.

That pent-up anxiety wasn’t lost on the staff at Motorcycle Mojo either, as soon as I got word that I could pick up an XR1200 for a few days, I was out the door like a cat that just sat in turpentine.

The new XR has had some dramatic changes to command such a following. The race inspired design actually had input from Harley-Davidson factory-sponsored dirt track racing legends Scott Parker and Rich King.

First noticeable after thumbing the starter button is the vibration of the potent rubber-mounted air and oil cooled 1202 cc engine in the brand new frame. At idle, the front wheel shakes and it seems you can feel every power stroke from the pistons in the Evolution V-Twin engine through the seat of your pants and the handlebar. Once the throttle is twisted just off idle, the engine smoothes out to unveil a finely-tuned electronically controlled fuel injected power plant. 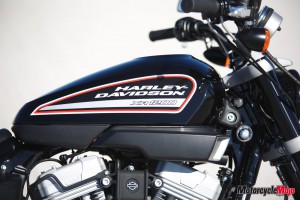 The Sportster Evolution is getting long in the tooth these days with over twenty years of production under its belt, but an upgrade here and there keeps the old girl going strong. Many changes have taken place for this incarnation of the venerable 1200 Sportster engine including internal engine performance modifications, precision-cooled cylinder heads and a large capacity oil cooler that hangs off the left hand side of the frame.

The XR’s engine feels more responsive and powerful than the regular XL1200 Sportster but the specs on Harley’s website claim that the XR has 73.9 ft lbs of torque, 6 ft lbs lower than the XL’s number of 79 ft lbs. Harley-Davidson does not release horsepower numbers but upon inquiry, they do claim that the XR1200 is tuned and geared for mid- and high-range performance, and does in fact have higher horsepower than the XL. This is due to performance camshafts that offer more lift and longer opening durations, an increased compression ratio of 10:1, larger volumes of intake and exhaust and downdraft fuel injection that includes a larger 49 mm throttle body diametre, all of which help to maximize engine breathing characteristics. The red line has also increased in the XR1200 to 6,800 rpm.

Very apparent while riding the bike for the first time is to hang on tight. While letting out the clutch and twisting the throttle, the torquey engine lurches forward in an apparent attempt to separate the loose grip of an unsuspecting rider from the handlebar. I don’t claim for a minute that this engine is the fastest thing on the planet, but between the responsive, twitchy throttle and the big torque right off idle, it does surprise the unsuspecting rider. It is partly that down low torque that makes the 1200 Sporty such a fun bike to ride.

The new 2-1-2 upswept brushed stainless exhaust has a nice sound to it, but not as nice as the visceral growl coming from the air intake on acceleration giving the rider a whole new appreciation of the sound of the engine. Who needs loud pipes that you can’t really hear because they are below and behind you when you could have the sound of a beast growling directly below your right wrist. The airbox intake is located at the lower right front of the gas tank.

Shifting is clean and crisp. With a short throw and light snick, the transmission always shifted without hesitation and finding neutral was a cinch every time. The clutch pull was easy and the friction point not abrupt. The clutch began to engage just where I like it, about halfway through the clutch lever travel.

Apart from the revised frame, there is less twist and flex in the corners, thanks to a new cast aluminum swingarm and the inverted front fork. The new swingarm is considerably stiffer than previous swingarms and as a bonus, it is also lighter while the beefy 43 mm Showa fork up front takes care of the initial shock of road imperfections. The fork does not have any adjustment, but the rear twin shocks do offer preload adjustment. The suspension lets the larger chunks of damaged road through to the rider, but it never bottomed out and for a wheelbase of only 151.9 cm (59.8 in) it does a pretty good job of keeping spine-jarring jolts at bay.

In addition to the sport-tuned front and rear suspension, the design engineers made sure this bike can handle the corners appropriately by giving the XR a lean angle of 39 degrees, more than any other Harley. Holding the bike on the road are a pair of Dunlop Qualifier tires—a 180/55-17 on the rear and a 120/70-18 breaking the wind up front—mounted on three-spoke lightweight cast aluminum wheels. The Dunlop Qualifiers were specifically designed for the XR1200. Between the sport-tuned suspension and the Dunlops, it only takes a slight push on the wide dirt track styled handlebar to make this 263 kg (580 lb, in running order) bike carve a corner and hold a steady line with ease. 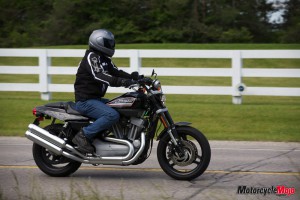 Slowing the hot rod XR down is taken care of by a pair of four piston solidly mounted Nissin calipers up front squeezing 292 mm rotors. With moderate pressure, the front brakes do an awesome job of stopping the XR from any speed and offer good feedback. The same can’t be said about the rear single piston caliper and rotor. which requires a very heavy foot for the rear brake to have effect on the bike’s speed. More often than not, I found my right foot on the exhaust heat shield, which resides immediately to the left of the brake pedal. That is a testament, however, to the effectiveness of the heat shield, as I didn’t leave any melted boot rubber behind.

Riding position is bolt upright and my feet were right below my butt keeping my lower back straight. Handlebar is a perfect distance, so I wasn’t leaning forward nor sitting back on my tailbone. The seat height comes in at 74.1 cm (29.2 in) off the ground and the foot pegs being in a more aggressive stance made for a pretty comfortable position, but if anything, I found my knees were bent a tad too much. Maybe it’s just me though, my knees don’t bend like they used to. While the seat is thin, it did a good job for a couple of hours at a time in the saddle and did provide room to move fore and aft. If sliding off to the side a bit while cornering though, I was presented with the seat frame and bodywork digging in and I can tell you that it isn’t near as comfortable as the padded section.

Handling was as easy at slow speeds as it was at high speed. Balance was excellent and coming to a complete stop with feet up, albeit a quick stop, was easy to get used to. Similarly feet up U-turns were a snap.

Other than the aforementioned vibration at idle, a Harley trait for a rubber-mounted engine, I did find some vibration in the seat at around 2,000 rpm and some in the handlebar in the 5,000 rpm range, none of which should be a bother since the engine revs at 2,800 in fifth gear at 80 km/h and 3,500 at 100 km/h. The mirrors also did a fine job of staying smooth enough to see behind while on the highway and offered a good rear view.

The minimal instrument cluster holds true to the bike’s racer roots. The tachometer is the most predominant gauge in both size and position while the LCD speedometer is much smaller and off to the left side. When racing you don’t really care how fast you are going as long as no one is in front of you, right? The odometer, two trip meters and clock are positioned at the bottom of the tach while the warning lights, containing a low fuel light, reside directly below the tach housing.

The low fuel light confused me a bit, it lit one time at 178 km and the next time at 227 km. I don’t know why the big variance, but even in a worst-case scenario I still had 43 km to bone dry. Averaging 5.15 L/100 km (55 mpg), the total distance to be expected with a variety of roads and riding styles one could expect out of the 13.25—litre tank should be around 255 kilometres.

Fit and finish is excellent for the most part, but once in a while something sneaks through and in the case of my demo XR there was some rust showing on the front brake rotors and on the end caps of the upswept mufflers, where I expect water might have collected.

I have always been a big fan of the 1200 Sporty so it comes as no surprise that I found the XR1200 to be a ton o’ fun to ride. Whether you’re attacking country back roads, carving canyons or flying down the highway, the XR is up to the task. Who knows, with a little DNA extracted from the race-bred XR750, you may even see one or two of these babies on the dirt track. And the crowd goes wild!

The XR1200 rolls in with an MSRP of $13,869 for Vivid Black or $14,239 for Pewter Denim or Mirage Orange Pearl. Go to your local dealer or www.harleycanada.com for more information.