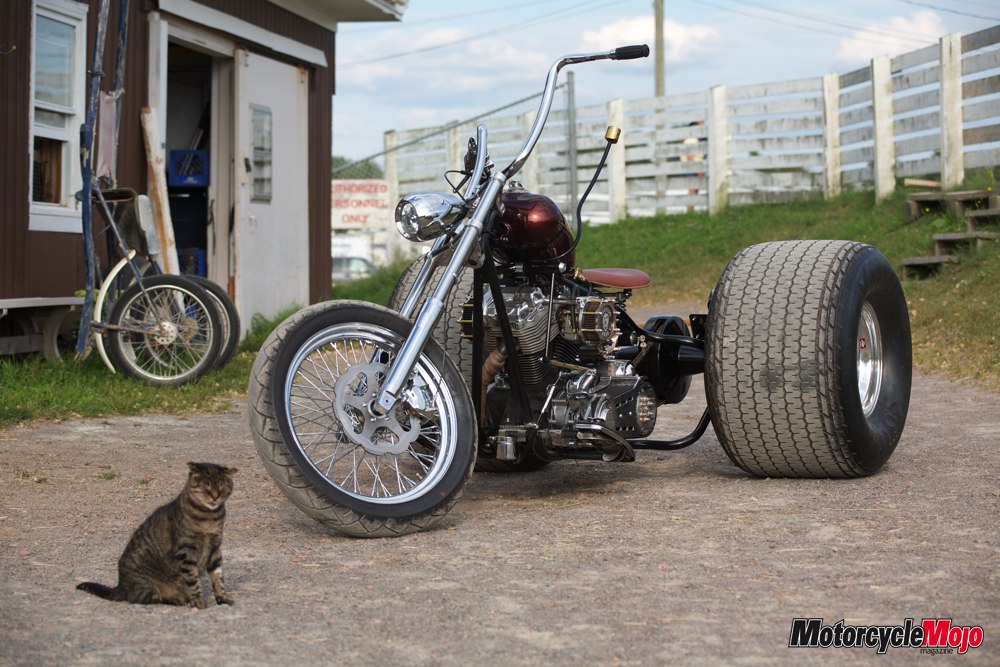 It is said that good things come to those who wait, and Chopper Rod has experienced just that. Being a collector of sorts, he would accumulate miscellaneous parts as funds allowed, although at the time he wouldn’t necessarily have a plan for all of the acquired parts. He just figured that if he waited long enough, a need for them would arise.

Chopper Rod and his four-man crew, all of whom play a pivotal role in all of the builds that emerge from his eight-year-old Fredericton, New Brunswick, V-Twin service shop, really didn’t have any plans to produce a trike. A visit to the big V-Twin show in Cincinnati changed all that when Rod spotted this Canadian-made frame by Maximum Metal Works. The price seemed right and the guys in the shop are always ready for a challenge, so they figured they could make good use of some of the used parts clutter that seemed to be taking over the shop. Little did they know, they were embarking on a build that would be a collective show winner.

Visually predominant when you first set eyes on this beast is the massive set of rubber on the rear. Secondly is the engine. It might look like a regular run-of-the-mill V-Twin powerplant to the uninitiated, but there is something about the top end that stands out from the norm. And then, upon closer inspection, you start to notice the ancillary bits, like the handmade oil tank, air filter housings, carb and engine mounts and shifter levers, to name just a few of the items that were all machined in-house.

The guys had been tripping over the engine for some time, but Rod felt it needed to be a bit more outrageous to fill the engine compartment in the big trike. Also collecting dust were a couple of very rare Rivera four-valve hemi heads. Adding to the engine’s visual size is the need for dual carburetors to feed the multi-valve heads. After the engine was rebuilt and motor mounts were manufactured, the engine found its home in the trike’s engine bay.

The transmission consists of a case that was hanging around way too long, and the gear set inside is a mixed bag of spare parts. The reverse drive was a trade for fixing an oil leak on a bike that once carried a sidecar but no longer needed the reverse mechanism. Yes, the barter system is alive and well.

The larger-than-life rear wheels and tires have a colourful Canadian history – made on the drag strip. These tires are from a drag car owned by Boo King. According to Chopper Rod, the car that raced with these tires still holds the record as “Canada’s fastest street car” as determined at a Miramichi, New Brunswick, drag strip. When I commented on how much they must weigh, I was shocked when Rod said, “One of these rims and tires from the race car weighs less than a stock Harley wheel and tire.”

The frame’s rear section took some extensive modifying to fit the tires and wheels, but the talented bunch at Chopper Rod’s didn’t have any qualms about cutting, reshaping and welding the structure to accommodate the big buns. Bolting on a front end from a Harley Wide Glide (year unknown) and a pair of triple trees with a 7-degree offset in addition to the frame’s 38-degree rake set the course for the front half. Throw in many hand-made parts and the final result drives home the point that good things actually do come to those who wait.