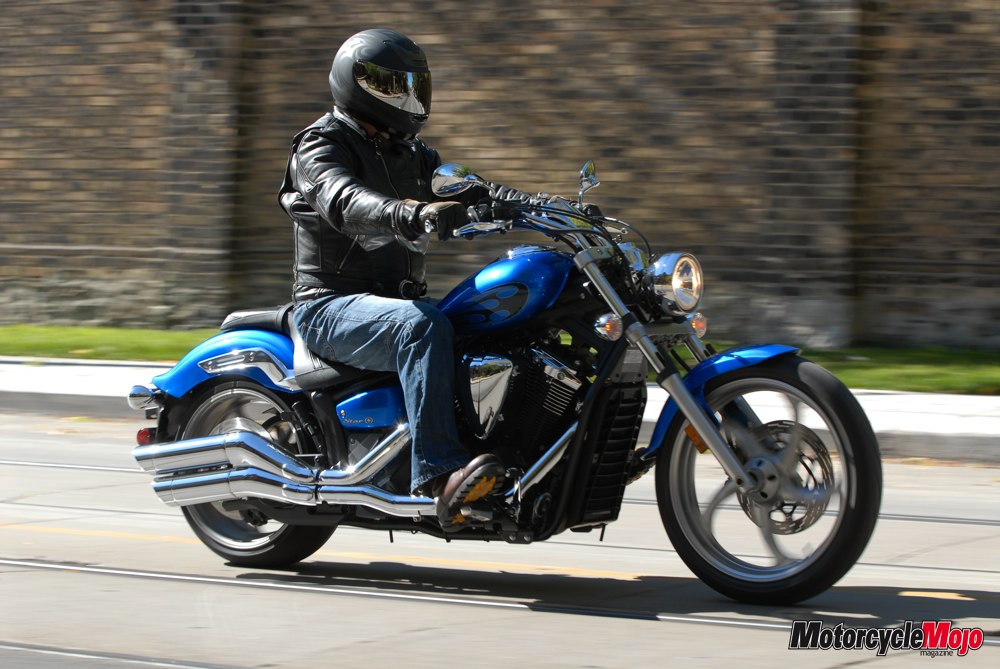 Pity the poor, beleaguered fans of hardcore cruisers. Never has any one group of riders been so misunderstood and their motorcycles so underappreciated. With the unveiling of the 2011 Stryker, Yamaha has proven they care. They say it’s a machine that imbues “youthful rebellion” and is so hardcore that, in their sales rhetoric, they promise that just one ride will allow you to “discover your inner bad-boy attitude.” Slightly fearful that I was about to embark on a spree of convenience-store robberies, I grabbed the keys to a Stryker and set out to discover what Yamaha’s latest creation was really about.

Yamaha says the target buyers for the Stryker are re-entry motorcyclists who long ago sacrificed two-wheel ownership for a minivan loaded with baby seats, together with existing riders who are looking to upgrade from smaller cruisers such as their V-Star 650 and 950 models. Potential buyers interested in this type of machine will value its curbside presence as much as its performance. Understandably, I was overcome with a sense of déjà vu when first studying the Stryker’s form. It was built in the shadow of the Raider, which is arguably Yamaha’s most audacious cruiser. Already labelled the Raider’s little brother, the Stryker has more than a passing resemblance to the bigger machine.

The Stryker’s design is unabashedly assertive. Inspired by the elongated and heavily raked chassis used in ’60s and ’70s custom choppers, the Stryker is the stretch limo of modern motorcycles – minus the high school kids vomiting from the sunroof. With a 1750 mm (68.9 in.) wheelbase – 60 mm longer than the V-Star 1300 – it’s long enough to span the borders of a western province. The frame further distinguishes itself from other cruisers through its high-positioned steering head and airy openings, trademarks of classic chopper design. Barely above ground level at 670 mm (26.4 in.), the low seat contributes to the bike’s slammed look and further exaggerates its length.

To reinforce the stripped-down chopper theme, Yamaha hid the rear shock to create the appearance of a hard tail. A new set of thinly spoked, cast-aluminum wheels uses a fat, 210 mm rear tire for instant street cred and a skinny 21 inch front wheel with a single brake for an imposing front end.

Available in black, blue or red, every Stryker features a high-contrast matte black and bright chrome treatment of the engine. Along with the fuel tank, the stubby flared front and rear fenders are made of steel, the canvas of choice for custom painters.

With a forward reach to both the pegs and handlebar, the Stryker’s seating position tries to fold your body in half – standard fare for most cruisers – but because the bike has a long chassis, there’s plenty of room for bigger riders. Firm and form-fitting, the seat was initially quite comfortable and ideal for short sorties around town. On longer rides, the one-piece seat’s steep rise to the pillion noticeably limits movement and begins to numb the buns. Worse for me, and long before the seat became an issue, was its effect on my lower back. I was still recovering from a herniated disc, and the seat’s contour was wreaking havoc on my rehabilitation process; those suffering with back issues will need to be vigilant with their posture when sitting on the Stryker.

Another similarity to the Raider is the Stryker’s high steering head and sloped fuel tank, which actually provide a modicum of shelter from the wind and makes high-speed cruising a less onerous task. Eyes forward, the instrumentation is basic but mounted up high on the handlebar, making it easy to read. Inside the analog speedometer is a small LCD capable of displaying an odometer, two trip meters, the distance you’ve travelled on reserve fuel, a clock and a fuel gauge. What should be standard on every motorcycle is the button on the right-hand switchgear pod that allows you to scroll through the various display options. I appreciated the convenience (and safety) of not having to reach far forward while trying to stab a little button on the instrument pod with a thick-fingered glove.

Not forgetting that the Stryker isn’t form over function, the bike uses the same 1304 cc, liquid-cooled, 60 degree V-Twin that is fitted to Yamaha’s V-Star 1300. The dual counterbalanced engine is rigidly mounted in the double-cradle steel frame and was smooth in operation. The balancers quell all high-frequency vibration, although they do not inhibit the power pulses. These are a desired characteristic of the V-Twin layout, in part generated by the engine’s uneven firing intervals. In top gear at 100 km/h, only the purely pleasant V-Twin throb could be felt – the slight pulses in the pegs, handlebar and seat did nothing to detract from the ride.

The engine felt very strong and is one of the highlights of this machine. With accurate fuelling and a peak torque of 106.93 N-m (78.8 ft-lb) said to be available at 3500, quick clutch releases really snapped the bike forward and provided purposeful acceleration. With quick throttle openings from low revs, the immediate torque hit could also be felt hammering its way through the drivetrain. The effect could be lessened by exponentially opening the throttle and allowing any slack in the system to be gently taken up.

While occasional shifting through the five-speed transmission initially led me to believe that the clutch pull was moderate, my first stint of prolonged stop-and-go traffic quickly changed my mind as it exacted a toll on my wrist. Gear changes through the five-speed transmission were smooth, though they were accompanied by a mechanical noise which Yamaha claims is a concession to better durability over long-term use. The gear ratios are suitably tall to cover the range of speeds, and even though fifth gear doubles as an overdrive, there was never a situation that had me wishing for a sixth gear. Bringing the power to the rear wheel is a carbon-corded belt that lists reduced maintenance and mechanical noise as its benefits.

Concerned that a liquid-cooled engine might be an affront to chopper purists, Yamaha hid the Stryker’s cylinder head under cooling fins and tried hard to minimize the visual impact of its liquid-cooling components. While stuffing coolant lines inside the crankcase and hiding the radiator between the front frame tubes works when viewing the bike in profile, from every other angle there’s no mistaking that this isn’t an air-cooled lump.

The exhaust incorporates an oxygen sensor as part of a closed-loop ignition system to automatically adjust the air/fuel mixture and minimize the rider’s carbon footprint. Society will tolerate a bad boy on his cruiser, but not when that bad boy is contributing to global warming. For those determined to contribute to noise pollution, Yamaha has thoughtfully located the oxygen sensor before the mufflers to allow for the use of replacement slip-on mufflers. Critical to any cruiser is its exhaust signature, which from the Stryker’s dual slash-cut mufflers is a throaty rumble that sounds aggressive without being overly loud.

As anyone who has ridden a true chopper can attest, its radical geometry poses a serious compromise to handling. Most obvious is the effect of an exaggerated rake, which, although it may aid in straight-line stability, also causes leaden steering. Yamaha’s engineers must have spent many sleepless nights aghast at the thought of unleashing thousands of ill-handling cruisers on public roads, so they came up with a smoke-and-mirror solution to make their bike look like a chopper but handle like a normal motorcycle. First used on the Raider, the Stryker also has a yoke for the fork which has been offset by six degrees; this gives the Stryker the appearance of an extreme 40 degree rake, yet effectively gives the bike the handling of a 34 degree rake.