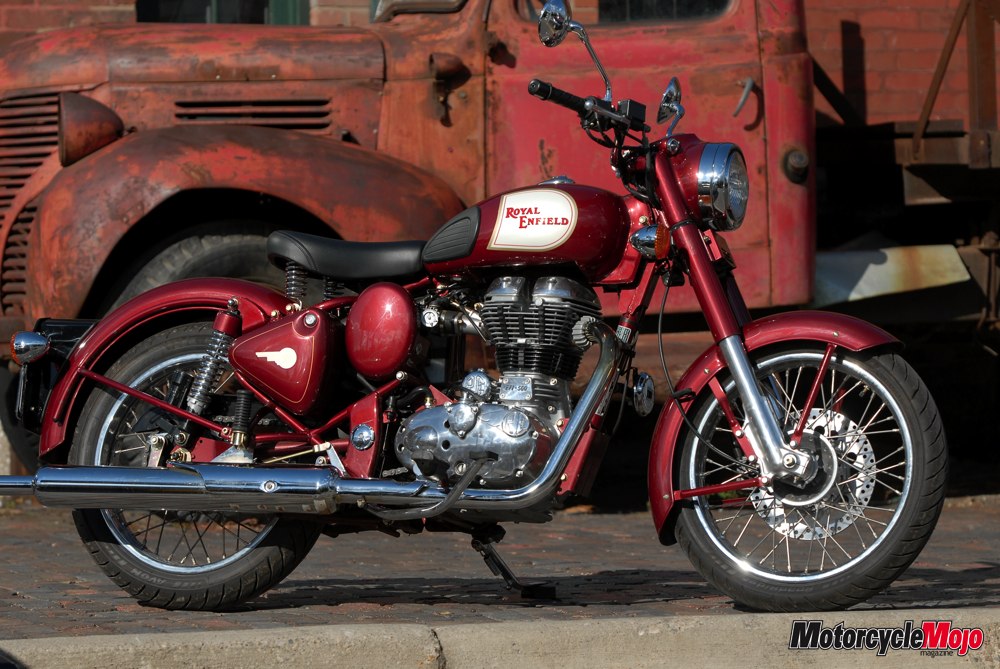 During planning of the photo shoot for the Royal Enfield Bullet Classic EFI, photographer Hugh McLean and I discussed the opening scene from Lawrence of Arabia. For readers unfamiliar with David Lean’s 1962 classic, the film begins with actor Peter O’Toole fettling over a Brough Superior SS100 in the courtyard of a rural English home. The film sequence – in which the actor kicks the legendary motorcycle to life and rides it down a country road – is only three minutes in length, yet it is a poignant representation of the motorcycle experience. During most of the footage we can only see O’Toole’s face, which carries a sombre expression at the start of the ride. As the road opens and the bike settles into a loping gait, the folds of his face relax and a reticent smile appears, a transformation that any rider would identify as the emotional effect that riding has on our soul.

Royal Enfield’s Bullet Classic has very little in common with the Brough Superior once owned by T.E. Lawrence, but it does evoke the spirit of a by-gone era. Just like the so-called modern classics being produced by Triumph, Moto Guzzi and Harley-Davidson, the Bullet Classic taps into a nostalgic vein; buyers of these motorcycles reject modern complexity in favour of simple, non-cluttered designs that embrace the aesthetic values of our forefathers.

Previous generations of motorcyclists would certainly have been familiar with the Royal Enfield name. Founded in 1893, the original Britishcompany went out of business in 1971. However, a satellite factory the company had established in India in 1955 held on to the name and continued producing Bullets, making Royal Enfield the oldest surviving motorcycle manufacturer in the world, and the Bullet being the longest continually produced motorcycle model in history. In 2010, Royal Enfield was re-introduced to Canada by Origin Motorcycles of Edmonton, Alberta. It’s not the first time an attempt was made to import the brand into Canada in recent years. Unlike the failed attempt in the ‘90s, Origin has the luxury of offering updated designs that promise greater reliability

The Bullet Classic with its tank-mounted knee pads, spoked wheels and solo spring-suspended seat is rich in vintage Royal Enfield DNA. It’s a modern-day, handmade evolution of a 1955 model that had first been introduced in 1948. Some would argue that little on the bike has changed since then.

In person, it’s obvious that the Bullet Classic is a bare-bones machine with a fit and finish that pays more attention to function than form. The welds on the test machine weren’t pretty, some of its hardware had already started to rust and the ignition lock looked like an afterthought that was jury-rigged in someone’s backyard. The hand-painted livery, although acceptable, was rough in a few areas such as around the fuel cap. The instruments did little to alter the rudimentary theme of the bike; a basic speedometer incorporated an analog odometer along with a high beam, neutral and turn signal indicator. The oil and low fuel warning lights were separately housed, which together with the speedometer and ignition were part of the headlight housing.

Rider controls consisted of non-adjustable brake and clutch levers and switchgear that looked to have been sourced from a Japanese motorcycle. Although highly functional, the switchgear was the most modern looking component on the motorcycle and looked at odds with everything else on the bike. Hinting at the bike’s British heritage, the Bullet Classic came equipped with English made Avon RoadRider tires, a 90/90 – 18 on the front and a 110/80 – 18 at the rear.

Before I had even ridden the Bullet Classic, I discovered a quirk with starting the bike. It was impossible to start it or let it idle on its side stand. Lowering the side stand cut the engine immediately; however, I could start the bike and let it idle on its center stand. I found it a little peculiar to have to either sit on the bike with the side stand up or deploy the center stand just to let it warm up. More odd, was that I could start it in gear while it was on the center stand and leave the rear wheel happily spinning at the engine’s idle speed.

Once underway, it quickly became apparent that the Bullet Classic was an immensely enjoyable motorcycle to ride, even if it wasn’t up to the standards set by modern Japanese or European machines. As an example, the transmission was intolerant of subtle control inputs; it took a deliberate prod of the gear lever to guarantee a proper shift, gently snicking the lever would often result in the transmission dropping into a false neutral. Rather than chastise the Bullet Classic for being a less refined machine, I found that the need to exaggerate my motions only added to the bike’s charm. With its vintage appearance, low power output and unassuming demeanour it was difficult to not ride the bike without a stupid grin plastered across my face, and I found my initial critiques had begun to diminish in importance.

The engine used in the Bullet Classic, and every other Royal Enfield model being imported into Canada, is a 499 cc, air-cooled single. It would be charitable to describe its power output as modest; with less than 30 horsepower you won’t be setting any speed records, but there is enough for it to easily keep pace with other road users. According to Royal Enfield, a selling feature of the engine is that it is capable of a 3.3 L/100 km (85 mpg) fuel economy. No doubt there will be happy-go-lucky riders with enough patience to achieve that efficiency, but in the hands of a motorcycle journalist putting a motorcycle through its paces, it averaged 4.9 L/100 km (58 mpg) during combined city and highway riding.

At cruising speeds, the engine remained fairly quiet, its peashooter exhaust playing a calming, chuffing soundtrack. The electronic fuel injection, a modernity that wasn’t offered during Royal Enfield’s previous visit to Canada, worked flawlessly and provided responsive fuelling that was free of any flat spots. The clutch action was light and smooth, but I did find myself wishing that the five-speed transmission had an overdrive gear. Although the existing gear ratios were well suited to city or country riding, on major highways where the engine was required to run at higher revs, vibration was prominent in the foot pegs.
A diminutive stature, combined with a low 187 kg (412 lb) fully fuelled weight and good balance, made the Bullet Classic feel more like a motorized bicycle. No one would find this an imposing motorcycle to manoeuvre, whether they’re pushing it around the driveway or threading their way through heavy traffic. Skinny tires and a short wheelbase give it nimble handling – too nimble at times, as the bike was very light to turn. Decreasing-radius turns taken at speed demanded attention; adding additional steering input after committing to a line through a turn caused the bike to want to flop onto its side. Of course, riding at a more sedate pace was the easiest way to alleviate this issue.

I expected that with a non-adjustable fork and a pair of basic shocks, the Bullet Classic was going to give me a good hammering on urban roads, but the bike’s suspension turned out to be a pleasant surprise. The fork did an admirable job of handling poor-quality road surfaces and provided a soft ride without feeling sloppy. The preload adjustable rear shocks with piggyback reservoirs were the first line of defence in what I considered to be a two-tier suspension system. Any impact significant enough to overwhelm the shocks was absorbed by the springs that supported the rider’s seat. I shouldn’t have been surprised that Royal Enfield got this part of the motorcycle right. Though it might seem inconceivable, the road network in India is probably in even worse condition than our own, and effective bump absorption would be an important consideration for the motorcyclists navigating those streets.

Predictably, the brakes were less than impressive. When deciding to fit a single disc with a two-piston caliper at the front wheel and a drum brake at the rear, you can’t expect excessive braking force to be generated. Although the drum brake was a lost cause – I had to practically stand on the pedal to lock the rear wheel – the front, surprisingly, offered enough feel at the lever to give me an idea of what the wheel was up to. Fortunately for Bullet Classic owners, the bike’s relatively light weight made it easier to slow than a cruiser twice its size, and the anemic brakes were adequate to stop the bike.
There was one other complaint with the brakes. The position of the oversized brake pedal not only encroached on the peg, but it was also higher as well. The setup forced me either to ride with the toe of my boot on the peg, or to twist outward to keep it from resting on the brake lever and burning out the rear brake.

Though primarily considered a one-up machine, an optional rear seat is available for $170; I can only imagine what effect an additional person would have on the performance of this machine. Also unknown is the long-term reliability of the updated Royal Enfields being sold in Canada. With his first riding season now behind him, I strapped a local Royal Enfield dealer to a chair and browbeat him about any mechanical issues he had encountered. He swore that none of the models his dealership had sold required anything other than scheduled maintenance.

By now you may have reached the conclusion that the Bullet Classic would make a poor choice for a prospective buyer – and you would be completely wrong. Rather than diminish its appeal, the shortcomings that make this bike primitive by modern standards actually reinforce its retro persona. Riding the Bullet Classic provides the sensation of being on a vintage motorcycle because, in many ways, a new Royal Enfield is a vintage motorcycle. Knee-deep in character, its simplicity is a refreshing back-to-basics approach to riding that distills the essence of two-wheel motion into something that nourished my soul. It’s no wonder that this motorcycle summoned up memories of Peter O’Toole’s ride in Lawrence of Arabia.

On a more practical level, at $7,395, the modestly priced Bullet Classic makes a great city bike and an enjoyable mount for exploring quiet country roads. I’ll even dare to say, a good beginner bike. However, extended superhighway runs should be avoided at all costs. They would only be a test of endurance – both for the motorcycle and the rider. Most unexpected for me was that the Bullet Classic challenged my perception of how motorcycles should be judged; do we cull bikes based on their objective performance, build quality and inherent value, or for the emotional effect they have on us? I’ll leave that up to you to decide.