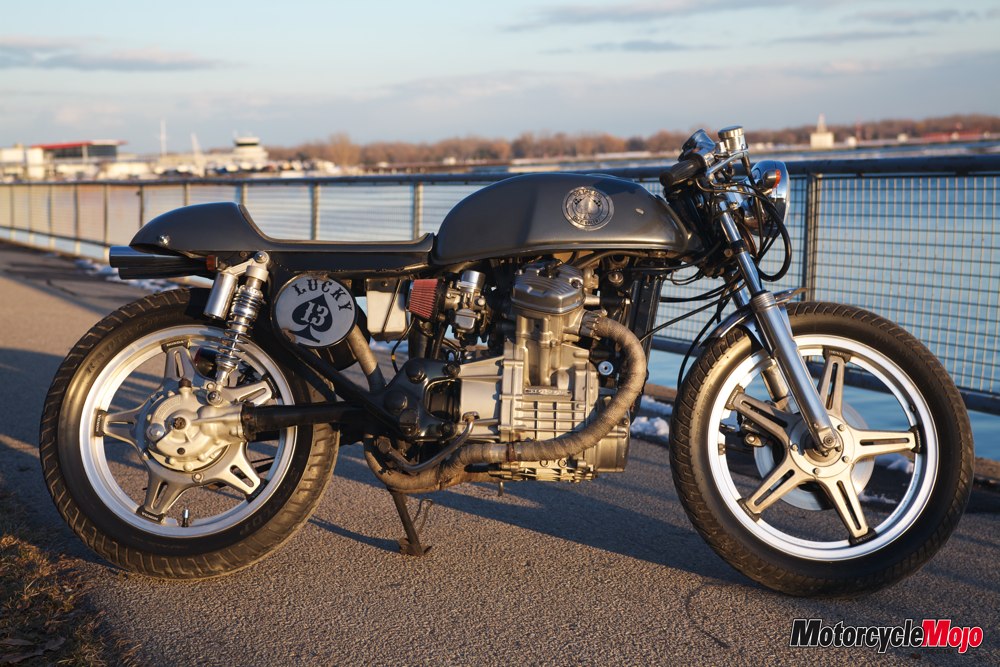 The sweet little café racer you see on these pages didn’t always look this good. In fact, shortly after Paul Dutra purchased the little Honda CX500 with a bad alternator stator, it was parked behind the garage and forgotten about.

He lost interest in riding for a time, nine years to be exact, after which his enthusiasm rebounded. Always a fan of the café racer style of bike, he lusted after the then-new Ducati Sport 1000, a bike with café racer livery right from the factory. His lust soon became disappointment when he realized that he couldn’t afford the Italian beauty.

All was not lost, however. He remembered the lonely little CX500 behind his garage. He brushed the spring snow off it and dug it out of the nearly frozen mud – it had sunk to the frame while sitting dormant for so many years – and pushed it into the garage to thaw out.

The engine hadn’t seized, so Paul disassembled and cleaned the carbs and added fresh fuel, and sure enough, the little Honda fired up and ran like a champ.

Paul had dabbled in motorcycle maintenance and modifications prior to his nine-year hiatus, so stripping the CX wasn’t a big deal. He trashed everything that wasn’t needed and began transforming the little bike into something he would be proud to ride around the city.

In three short weeks he had a new café tail section mounted, manufactured the underseat exhaust, and swapped out the original front end for a beefier front fork and triple trees from a CB650. Next in the transformation was relocating the battery and all the electronics for a cleaner, more streamlined look. Now that he had the basic stance he was hoping for, it was time for the detail work.

Polishing everything that wasn’t painted took time, but the end result can be very gratifying, as can being your own painter. It isn’t always easy to achieve a lasting paint job with a rattle can, but Paul didn’t seem to have a problem mastering a clean, run-free paint job.

Even though the little CX was a daily rider for many years – he logged around 27,000 kilometres on it – Paul sold it last spring. He borrowed it from the owner for the photo shoot and commented on how much fun it is to ride and how he sort of missed it.

Paul is back into motorcycles in a big way these days. He has his own shop where he customizes motorcycles as a hobby in the evenings – when he isn’t putting hours in at his day job or thawing out frozen little Hondas.