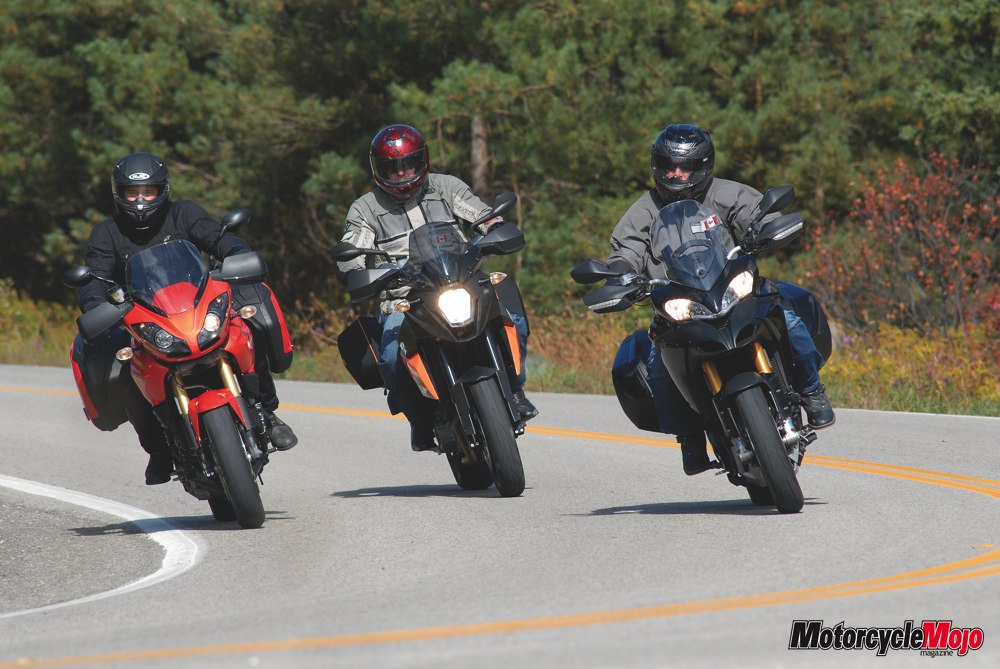 While it may be difficult to pinpoint the exact origin of the adventure-touring motorcycle, or identify the spark that ignited its relatively recent explosion in popularity, one thing is certain: more and more manufacturers have been trying to cash in on the adventure-bike phenomenon, especially since BMW enjoyed a significant boost in sales of their big GS models from the exploits of two actors-turned-globetrotters.

With more and more adventure-touring motorcycles hitting the road, you would expect a comparative increase in riders exploring the far reaches of the earth. There aren’t. The problem is that adventure-touring rigs are the SUVs of the motorcycle world – a little tougher and more versatile perhaps, but mostly there to project the image of a rough and tumble traveller. Most buyers will agree that their true appeal stems from the practical attributes and enhanced comfort of their machines. You don’t have to be an off-road specialist to appreciate the benefit of a robust suspension and a generous amount of wheel travel; the continuing decay of urban roads from shrinking maintenance budgets have turned daily commutes into minefields filled with rider-punishing potholes, heaving cracks and unforgiving bus knuckles.

Adventure-tourers also have an appeal for aging riders. As the average age of Canadian motorcyclists continues to creep upward, so does intolerance of the extreme riding positions of sportbikes and cruisers. The ergonomic shortcomings of those machines has caused riders to look at other types of motorcycles; in an epiphany of comfort, the creaking joints, inflexible limbs and decaying backs of riders have found refuge in the relaxed riding position of adventure-touring rigs.

On test, we have a selection of three big-bore adventure-tourers from European manufacturers, along with three aging riders to test them. The Ducati Multistrada 1200 S Touring, KTM 990 SMT, and Triumph Tiger 1050 SE in this test show how each manufacturer approached the question of what makes a great all-around bike, and how they all came up with different answers. All fit the adventure-touring stereotype and are fitted with the telltale parts that differentiate them from other breeds of motorcycle. They all have an upright riding position, robust and fully adjustable suspensions, wind-cheating screens, hand guards, and most importantly, the luggage needed to get away from it all.

Although they are capable of mild all-terrain use, they are not hardcore dual-sport machines. Willing to challenge any public road, paved or not, these motorcycles are not a viable solution for the extreme rider who wants to blaze his own path through the wilderness. Too big and heavy to stray off the beaten path, these bikes will nonetheless happily spray the gravel of a remote road without their owners having to cringe at the thought of chipped paint or disfigured custom chrome covers. And should the worst happen, they also have a better chance of handling a spill than any 385 kg dresser.

Ideally suited for those who don’t see themselves riding a stereotypical touring rig but who still like to rack up the miles, adventure-tourers are also the preferred tool of the lone wolf, the bike’s pillion position and pegs better suited, in their minds, for stowing a tent and sleeping bag instead of a carrying a passenger.

By Glenn Roberts
With comparisons by Uwe Wachtendorf and Roger Parsons

The 2003 Multistrada was Ducati’s first foray into the burgeoning adventure-touring segment, and while it used Ducati’s famous trellis frame and their tried and proven 1000 cc engine, the rounded fairing – half frame-mounted, half steering-mounted – left much to be desired aesthetically.

The newest generation of Multistrada, introduced in 2010, is a completely revamped machine, miles beyond the first generation in look and technology.

The appearance is much more aggressive. The lines are angular and the nose points down slightly, giving it an assertive stance. The whole fairing is mounted to the frame this time, and the windscreen is manually adjustable a full 63 mm (2.5 in.) up and down. In its lowest position, the wind hit the lower portion of my helmet. At its highest point, the wind hit the top of my helmet, and as an added bonus, it was great for keeping my face shield clear of rain. Hand guards with integral turn signals round out the wind protection.

While appearance is one thing, it’s the technology on our 1200S test bike that makes the Multistrada stand out from the crowd. The Testastretta 150 hp detuned 1198 cc engine, pulled directly from the Ducati Superbike catalogue, has no problem propelling you to highway speed from a dead stop in an exhilarating few short seconds. In fact, with a dry weight of only 192 kg, care must be taken to keep the front wheel on the ground when twisting the throttle aggressively. . .

By Uwe Wachtendorf
With comparisons by Glenn Roberts and Roger Parsons

At first glance, KTM’s 990 Supermoto T (SMT) appears to be an odd fit in this group; after all, a supermoto has nothing in common with an adventure-tourer. KTM disagrees. They believe a machine designed to compete on mixed road surfaces makes an ideal choice for all-purpose riding. KTM lists the SMT alongside their 990 Adventure in the Travel category of their line-up, which explains the T in the model’s name.

It’s typical of the Austrian manufacturer to cheekily marry two disparate types of riding into a new genre. However, it takes more than slapping a pair of panniers on a supermoto to make an adventure-tourer, so KTM took their 990 SM, modified its riding position for comfort, added a frame-mounted fairing, and altered the suspension for all-terrain use.

Unmistakably KTM, the SMT’s extroverted bodywork is sharply creased and emblazoned by a bright orange side panel. The attention to detail and quality of the bike’s build is high. The SMT had the most comfortable riding position for me; its broad seat provided all-day comfort, while the semi-tall windscreen did a good job of redirecting fatiguing windblast.

From the saddle, it felt like the most compact of this group, even though it had the tallest seat. The height was an acceptable compromise to the generous suspension travel that remained compliant even over the nastiest of bumps. That’s not to say the fully adjustable WP suspension was soft; whether I was navigating my way through close-quarter traffic or banked over in a fast sweeper, the SMT handled exceptionally well and clearly drew on its supermoto roots. Over gravel and dirt, the bike’s handling suffered due to a poor choice of tires; although the Continental Sport Attacks provided excellent grip on asphalt, they were like a dull pair of skates off-road. . .

By Roger Parsons
With comparisons by Glenn Roberts, Uwe Wachtendorf

From a strictly emotional standpoint, I was hoping to be the primary test rider for the KTM 990 SMT. As it happened, I ended up with the handsome, but not terribly exciting Tiger. Luck ended up on my side when the Triumph turned out to be an extremely competent companion for every type of riding that I encountered.

In this group, the Ducati might reign supreme in the battle of horsepower, but the Triumph has more than enough jam for any mood on the street. In addition to the lovely soundtrack from its three-cylinder mill, power was delivered in a linear manner and there was a very healthy reserve available when the pace picked up. It was superbly flexible; I found that I could leave the gearbox in sixth gear, enter 50 km/h zones and ride through them with only a hint of driveline snatch. When I whacked the throttle wide open once clear of the reduced speed zone, the bike would smoothly surge ahead into the meat of its powerband. Highway cruising was a relaxed affair with the engine spinning at 4100 rpm while riding at 120 km/h. Free of hiccups at every pace, it’s fair to say that the Tiger’s fuel mapping was about perfect.

At 835 mm, the Tiger had the lowest seat height, a full 20 mm lower than the SMT’s, yet it was the only bike that I wasn’t flat-footed on when balancing at a stop. Compounding the long reach to the ground, the Tiger’s 228 kg (502 lb.) wet weight made it the porkiest of the bunch. Despite these shortcomings, I didn’t find it a struggle to manoeuvre the bike at low speeds or push it around a parking lot. . .