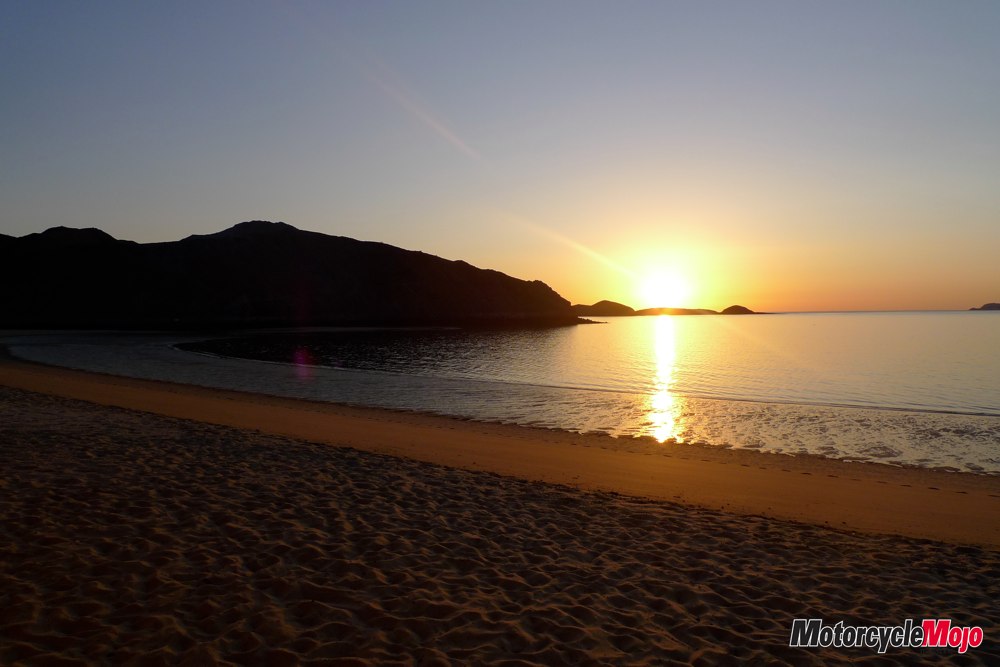 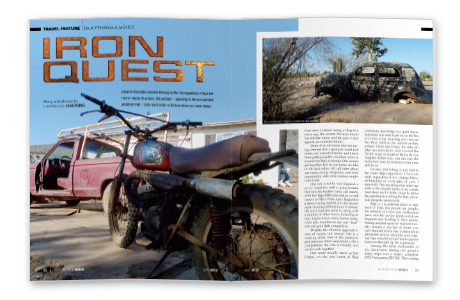 Ever since I started racing in Baja five years ago, the remote Mexican desert has felt like home, and the guys I race against, an extended family. More of an exclusive club for racing veterans than a group of casual trail riders, my extended family and I have been getting together for many years to explore the Baja peninsula. Our annual get-together lets us cut loose; we like to rib each other, tell tall tales about our many racing escapades, and most importantly, ride some serious single-track trails. 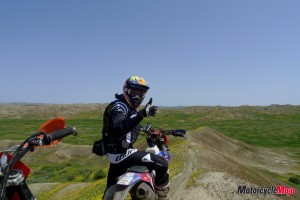 Our ride is led by Dan Ragland, a savvy desert fox with a racing resume that only his brother Larry can match. With five Baja 1000 wins and an overall victory at Pike’s Peak, Larry Ragland is a desert-racing legend and the second most–winning off-road racer in history. His son Chad also joins in, along with a number of other racers, including an Indy Lights driver and a former motocross pro; needless to say, our “trail” ride can get a little competitive. Despite the inherent aggressiveness of racers, our annual ride is a relaxing affair. Free of the pressures and pre-race jitters associated with a competition, the vibe is friendly and we jive well together.

Our route usually starts at San Felipe, on the east coast of Baja California. San Felipe is a quiet town; fishermen run their boats out to the Sea of Cortez every morning and you can buy their catch on the malecón as they unload. From San Felipe, the ride can take two directions: west toward the Pacific coast or south to Bahia de Los Angeles. Either way, you can vary the route from easy to extreme to suit your skill level. 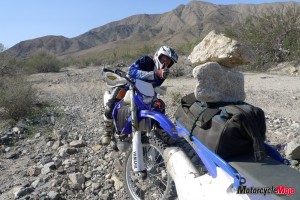 For me, trail riding is only half of the entire Baja experience. I love old stuff, regardless if it’s vintage bikes, architecture or even tales of yore. I especially like anything that takes me back to the simpler times of my youth. And there isn’t a better place to relive the past than travelling the Baja peninsula aboard a motorcycle.

Baja is a wonderful place to step back in time; the people are simple, life unfolds at a slow and methodical pace, and the yonque (junkyards) are frequent and busting at their seams. Poking around open-air markets usually reveals a myriad of items you can’t find anywhere else, at least not at affordable prices. Genuine and original, Baja was old school before anyone had even thought up the expression.

Among the most memorable of my discoveries during our group’s many trips was a nearly complete 1972 Husqvarna 250 WR. This rusting example of an iconic SoCal desert racer sat proudly in someone’s yard; its history a mystery to me, I only knew that it was last registered in California in 1979 and that it now lives on the Pacific coast, where the relentless salt air continues to slowly erode the motorcycle back to its original form, iron ore. How did it get there? Did a racer abandon it after crashing out of a Baja 1000 held long ago, or did it simply disappear from a hotel parking lot while its owner was asleep inside? The bike could have belonged to Malcolm Smith, or even Steve McQueen; if you let your mind wander, almost anything is possible. Although this particular bike’s history might be forever lost, for now, it sits as a testament to the legendary Baja desert races.

The Husqvarna’s original spark-plug holder now resides in my collection. It was only after buying it from the bike’s owner that I discovered the part sells for crazy money on eBay. Bargains are still to be had in Mexico. During another trip, we found an early ’70s Kawasaki Trail Boss. Having seen better days, it sat on the side of Highway 1 near Cataviña surrounded by discarded plastic drums and truck bodies. Its sun-baked carcass weighed heavily on its centre stand, and it seemed unlikely that the little Boss would ever run again. I imagined that it had provided hours of enjoyment before being unceremoniously dumped in Baja. An odd sight. I wondered why it had a street tire on the rear rim, or why no one had scooped its fuel tank; its clean, simple lines would go well on a custom-built street tracker. There’s nothing more nostalgic than a VW van. I once owned a 1967 model and now wish that I’d never sold it, but when you’re young and caught up with upgrading wheels, you don’t imagine that a restored split-window VW van would command $80,000 one day. I spotted a great example of a vintage VW in a fishing camp. Packed to the gunnels with junk, it had a weathered patina that could only be created by decades of exposure to the elements. Barely discernable underneath a layer of rust, its original emblems are a treasured commodity to the old-school custom crowd. As with so many of our finds, I wondered how this van ended up in a camp on the shore of the Sea of Cortez, destined to live out its remaining years hidden from view. VW enthusiasts would arm wrestle for the right to take on the project of restoring this highly sought-after barn-door panel van, but I’d leave its original patina intact. Imagine the contrast of this rusty van sitting on a set of shiny, low-profile rims and powered by a 2-litre mill.

Not far from where I found the VW was an example of the very first Honda ATC. The forlorn trike sat in silence, contemplating the fate it had been dealt, forever to be scorned for its inherent instability. A testament to life in exile; many new, non-current, three-wheeled ATVs were sent to countries where lawyers don’t buy television commercial time and billboards in order to solicit lawsuits, like they do in the United States. During a side trip to Punta Willard, south of San Felipe, we found a pre-1950 flat-fender Willys station wagon resting on the beach. As if waiting to be resurrected from its lonely abandon, the Willys was nearly complete and probably carried fishermen at one time into the depths of the Baja, long before paved roads had appeared on the peninsula. The well-built, low-compression, Willys flathead four-cylinder engine could run on the notorious low-octane Mexican brew that masquerades as gasoline. A Willys could also handle the endless miles of washboard road; there’s not much plastic to shake loose on these old clunkers, made mostly of thick-gauge solid steel. And their four-wheel drive would have come in handy to make the steeper grades within Baja. You get to see a lot of discarded American service vehicles in Baja. An old ’60s Cadillac ambulance was located beside Highway 1 well south of the border, as an example.

Many Baja fire trucks still display the name of the U.S. city from which they originally came. Making do is what Mexicans do best. The Mexican spirit is such that you see many innovative solutions to problems, which back home would have caused you to throw your hands up in defeat. Their standards are different, too. Common to Baja are mobile gas stations, with their attendants who pour out as much fuel as you need and charge you a fair price – never mind the hazards, dust or bugs. Stuck in Vallée de la Trinidad one evening with the keys to our new Chevy accidentally locked within the pickup’s cab, we summoned the local locksmith to crack it open. He made short work of the impregnable door and had us on our way in no time.

In Mexico, it’s a good idea to keep your vehicle in a secure compound at your hotel to ensure that it still belongs to you in the morning. Crisscrossing the peninsula on a dirtbike can take you well off the beaten path; in the high desert near El Coyote, a working ranch that hosts off-roaders, an early John Deere Model AR tractor sits surrounded by massive, odd-shaped boulders. Early inhabitants considered the area to be sacred, a feeling we shared when we rode our bikes on the high rocks above the ranch into a setting sun. The terrain in Baja can be as inhospitable as it gets, yet its ruggedness seems to draw its people together; the locals are at ease with visitors, and whenever our bikes took us into the bowels of a village, it seemed that everyone would give you a wave and make you feel welcome.

Although our group rides Baja at least once a year, it never seems to be enough. As soon as I’ve left, my thoughts are already on going back. I find these adventures to be strangely therapeutic; something about off-road riding in Mexico makes me feel more alive, in part because of the sensation that I’m cheating death at every turn. One thing is certain: when riding in Baja, you live more in a few days than many do over an entire lifetime. The experience certainly improves the thirst-quenching qualities of a cold Tecate, especially after a long ride under the desert sun. No matter how you slice a burrito, a trip to Baja will surprise you at every opportunity and provide a perfect backdrop for spending quality time with good friends. You’ll fall in love with its stunning panoramas and the beauty of its pristine desert, and if you’re a little twisted like me, you’ll become addicted to its to-die-for junkyards.