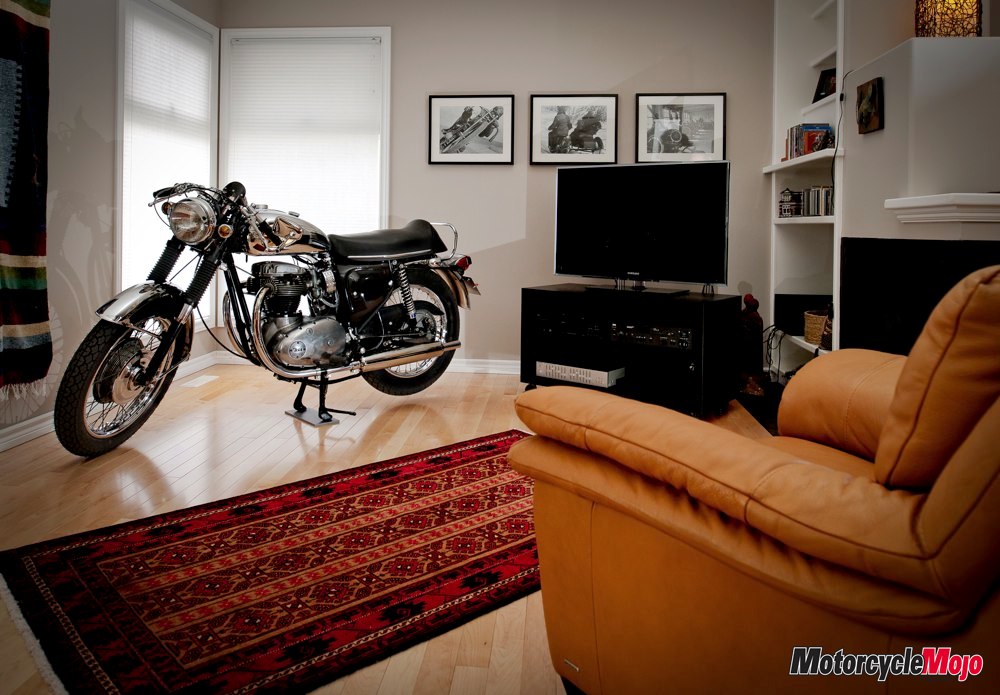 I have a BSA Bitsa in my family room. This seems perfectly normal to me, because this is not the first motorcycle to winter in the house as it awaits re-emergence in the spring. Needless to say, I have an understanding wife. This arrangement does, however, come with a list of conditions. The bike is to contain no vital fluids that could leak, smell or explode. Tools, motorcycle parts and other bike bits that may be associated with the motorcycle are to remain in the shop. Any wrenching or fabrication on the bike should be done in the shop and not in the family room. No activities associated with starting or running the bike (including burnouts) are to be undertaken in the family room. And finally, I am responsible for dusting the bike. These are all reasonable conditions that I can live with.

I refer to my bike as a “Bitsa” because it is made up of “Bitsa this” and “Bitsa that.” I don’t know much of its history other that it began life as a blue 1970 BSA Royal Star (500 cc), and at some point, a connecting rod parted ways with its crankshaft and exited through the bike’s engine cases. This was not an uncommon end for these motorcycles, and was likely the result of a questionable motor design that depended on a timing-side bushing rather than a bearing to support the crankshaft. This design allowed crankshaft endplay to slowly increase as the bushing wore, to a point where the crankshaft main journals were starved of essential lubrication and, in turn, the connecting rods seized to the crankshaft. As with my Bitsa, connecting-rod seizure was a catastrophic event that ended a motorcycle’s days.

I received the bike in a sorry state seven years ago after it had been abandoned for many years and left outside to rust. Since then, I have been slowly putting together the bits and pieces necessary to make it a serviceable motorcycle.

After restoring the frame and running gear, I fitted a rebuilt 1967 BSA Lightning (650 cc) engine, while other additions include a three-cylinder BSA gas tank, clubman bars, new seat, new rims and rubber, new fenders and a modern electrical system.

Before my Bitsa found its residence in my family room, I was making some adjustments to the brakes, and my mind began to wander. I don’t know if it was the lead paint in my system or my advancing age, but I was taken back to my high school days and my first BSA.

The year was 1969, and I was preparing to graduate high school. Motorcycles had captured my interest, quickly becoming a part of my life and the lives of my friends. We had all started on small-displacement Japanese motorbikes and steadily moved on to larger, British motorcycles. Triumphs, BSAs, Nortons and Royal Enfields roamed the streets, and if you were my age and owned one, you had likely worked long and hard at some menial part-time job just to buy the bike. By doing so, you gained instant street credibility with your peers. Unfortunately, you generally didn’t get the same respect from the authorities or the parents of the girls you were trying to date.

My pride and joy was a 1969 BSA, Model B25, 247 cc single, finished in what BSA called Bushfire Orange. I had bought the bike on layaway in November 1968 and had spent every available hour I had after school and weekends working to pay for it.

I generally parked my bike with the rear wheel to the curb on the side street adjacent to my home. My friends would join the lineup with their bikes, and the growing oil slick produced by the bikes was, according to my parents, more appropriately located on the public road than fouling their suburban driveway. I had a large chain and lock that I used to secure the bike in the evening. I can remember looking out my basement bedroom window before I went to bed at night and again in the morning when I got up, just to satisfy myself that my bike was still there. The BSA was my daily rider, and I loved it.

As with most bikes of the day, there was a starting ritual to be performed each morning. A quick look under the bike confirmed that the oil drips were consistent with the bike’s regular droppings. I was mindful of the need to properly check the tire pressures, but the early morning cold and an urgent need to ride often precluded the pressure check, so a quick kick with the toe of my boot confirmed that the tires had pressure.

A leg over the bike and a settling into the seat very often found that more time should have been spent wiping the dew from the seat seams. My mother’s towels were often used on especially damp mornings, much to her chagrin. She knew who she was dealing with, so she started leaving towels at the back door for my use on the bike. Needless to say, as long as my BSA was around, I never saw the good towels again.

My key was always kept in the right-hand pocket of my leather jacket. With the ignition turned on, a quick hand in front of the headlight confirmed that I had battery power. These were the days of points and condensers, zener diodes, rectifiers and Lucas switches, which all seemed to easily vibrate apart at the worst possible times.

The clutch lever was pulled in a few times to free the clutch plates that stuck together while I inspected the clutch cable for fraying; the lifespan of BSA clutch cables could never be predicted. The fuel petcock was opened and fuel would fill the float bowl, at which point the tickler on the Amal carburetor was depressed until gas overflowed the float bowl and dripped down the body of the carb. The strong smell of gas ensured a rich starting mixture. The short arm of the kick-start lever was extended, providing a firm purchase for the sole of my boot. Turning the engine over, slowly but firmly, I would feel its compression stroke. The first kick would generally cause the engine to cough and spit back through the carb, often evoking a muffled curse. A second kick usually caught the spark, and the engine came to life. Curses were replaced with smiles from the simple pleasure of hearing the deep crack from the BSA exhaust. With a few twists of the throttle, the Amal carb was cleared of its rich mixture and hesitation and the motor was allowed to warm up to operating temperature (usually determined by placing a bare hand on the head).

As a British bike owner, you always listened to the motor for unusual noise or some telltale sign that there were problems afoot. When the motor settled into an idle, first gear was engaged with the right toe of my boot and the bike would buck in response to the motor’s torque being transferred through the clutch plates.
I understood that I had to live in my neighbourhood, so I always exercised a little throttle restraint while leaving my house. Unfortunately, residents not considered to be neighbours of concern did not benefit from this restraint. Each gear was ridden to the edge of its rev limit as I headed west to where my street met a major collector street. Once on the collector street, there were no further thoughts of throttle restraint.

One particular morning on my way to school, I met up with a friend on his 1968 Norton Commando as I was rounding an off-ramp by our neighbourhood strip mall. We yelled a few good-natured derogatory remarks at each other about our choice of bikes as we geared down for an upcoming four-way stop.
This four-way stop marked the beginning of many street races, and that day in 1969 was shaping up to fall right into place for a BSA and a Norton. It was about a quarter mile to the next intersection, with my school at the halfway point. I knew I was seriously outgunned, but there is no pause for reasoning in the mind of a seventeen-year-old. A quick stage and it was on. The Norton easily gained a lead, and by the halfway mark it was clear who had the fastest bike. But to my adolescent way of thinking, there was plenty of street ahead, and I wasn’t about to back down and lose face in front of the entire school. I kept the throttle pinned and as my friend backed off, I passed him.

This moment of victory was immediately replaced with terror as I realized that the BSA brakes were not up to the task of late braking into the intersection’s traffic circle. I had ridden this traffic circle many times, but never this fast. Hoping for the best, I began peddling the gearbox for lower gears to utilize any braking I could gain from engine compression. I leaned the bike into the apex of the traffic circle as I ground the side stand into the pavement, gritting my teeth and hanging on. Luckily for me, the morning traffic had cleared, so there weren’t any cars in my way. My BSA was not considered the best-handling British bike of the era, but on that day, the Starfire performed for me. I came around the traffic circle back onto the street I had just headed down and pulled into the high school parking lot, victorious but humbled. Needless to say, there was the required bravado and a recounting of the adventure among my friends.

That morning during the public address announcements, the principal gave the school a stern lecture on the reckless and irresponsible behavior associated with street racing. He particularly mentioned the careless behaviour of two unknown hooligans who were seen that morning racing by the school on the adjacent street. According to the principal, the next incident involving this behaviour would have serious consequences, including the banning of all motorcycles from the student parking lot. I recall that I enjoyed being the hooligan of the day, but I never forgot the lesson I learned – brakes on a BSA are not up to late braking into a traffic circle.

Oh yes, and after surviving over forty years of riding, I have to agree with my high school principal: street racing is reckless and irresponsible. My past experience can be the source of today’s daydream, but it could have had a very different outcome for me and for others. Survival on the street does not generally favour the reckless and the stupid.

When my Bitsa emerges from its warm confines, I intend to take it to the track, where I can explore my hooligan tendencies and again test the limits of BSA brakes – in a much safer environment than the street.

After forty years of riding, Colin White remains an avid motorcyclist. He continues his love of British motorcycles by restoring and racing these special bikes. In 2008, he raced a 1939 Triumph T100 at the Bonneville Salt Flats. He is currently building a supercharged 1946 Triumph T100 for his next attempt at a land-speed record.”