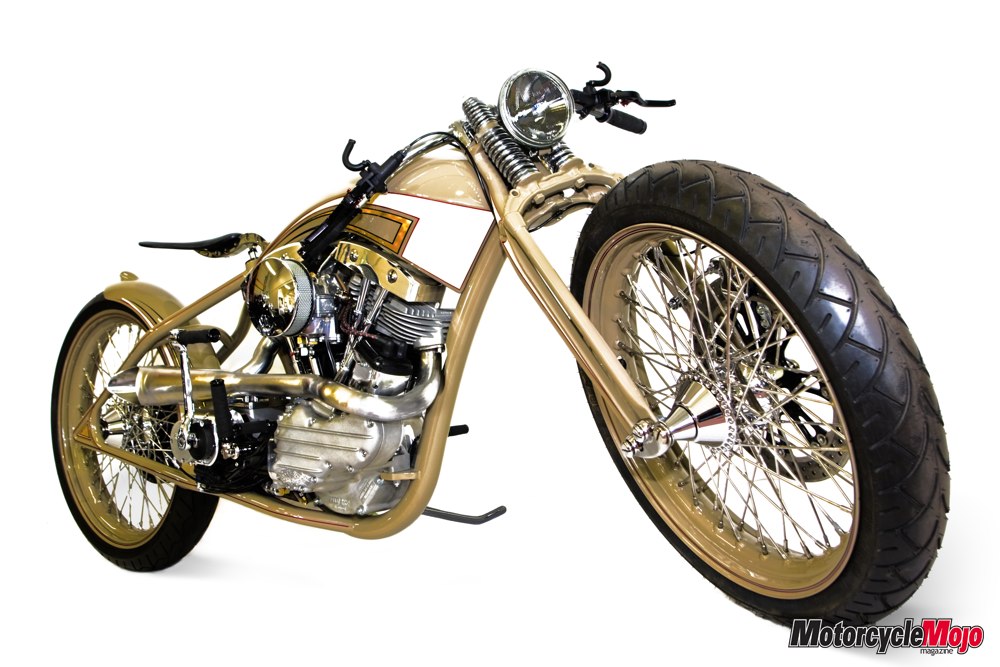 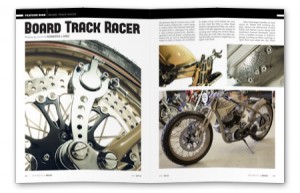 We all know that it’s cool to own a well-built custom motorcycle. I don’t mean a cookie-cutter bike littered with bolt-on parts from a catalogue; I’m talkin’ a real custom motorcycle. Builder-specified one-off frame, welding and bodywork, as well as machined parts made to order in house, all contribute to make a true, cool custom. So cool, in fact, that the folks at After Dark Motorcycles guarantee that you will do better with the opposite sex simply by owning and riding one of their bikes. That may be a tall order, but after seeing this bike in person, I might have to agree with them.

After Dark began humbly, as most shops do. While still working day jobs, motorcycle technicians Cordel Zilkie and Adrian Caccia, along with machinist Garrett Hromada, spent every available evening in Adrian’s garage working on bikes, aspiring to open their own shop one day. Hard work obviously paid off for these three. Today, After Dark Motorcycles has 10 people on the payroll and takes up 8000 square feet of space that includes a showroom, service department, machine shop and motorcycle storage area. 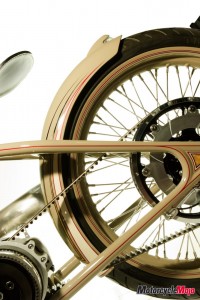 Most well-established custom shops strive to have a “shop bike.” While they all agree that anything is for sale, the shop bike exists to show the public and potential customers what the builder is capable of – it incorporates the passions of the builders as they pour their hearts and souls into it, and when finished, it goes on display for all to see.

Such is the case with this modern board track racer from After Dark in Edmonton, Alberta. While the boys have had shop bikes before, this is one of their latest creations. I ran into Cordell and Adrian at the Edmonton Motorcycle Show in January to look over some of the bikes they had brought for display. This Goldammer-esque board track racer caught my eye.

There was talk of some high-profile builders getting together for an organized board track race, and the guys at After Dark wanted in on it. Plans got under way for a board track-style bike, and Cordell admits that its inspiration came from Canadian bike builder and four-time world champion Roger Goldammer’s BTR-3.

The boys at After Dark began this build by sending Goldammer the required specs for the frame they desired. With a slight modification to the rear downtube, the new 93 cubic-inch S&S Pan/Shovel fit like a glove. To finish off the vintage look of the classic shovelhead engine, a kick-starter from a Prowler 5-speed was modified with hydraulic internals designed and manufactured at After Dark. A reproduction Harley-Davidson VL springer front fork was added, as were 60-spoke wheels to complete the bulk of the motorcycle. 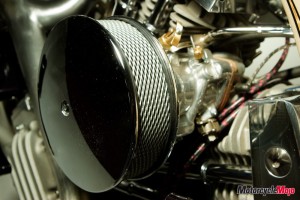 The clutch and front-brake master cylinders were robbed from a sportbike, and CRG levers were modified to fit the application. Contrary to popular belief, a full-size fluid reservoir is not needed on the master cylinders provided the fluid in the miniature hose reservoirs is checked regularly.

Rounding out the creature comforts and rider ergonomics on the rigid-frame racer is the seat. Although made from a basic seat pan wrapped in leather, its design suspends the rider by way of a mechanism mounted deep inside the frame’s downtube.

With time comes perfection, and this racer took three long years to complete, as dictated by available time and funds. With perfection comes admiration, and if there is a bike on the road that will help snag the opposite sex, I can only imagine it would be a custom build, and what is sleeker and hotter than a board track racer? .