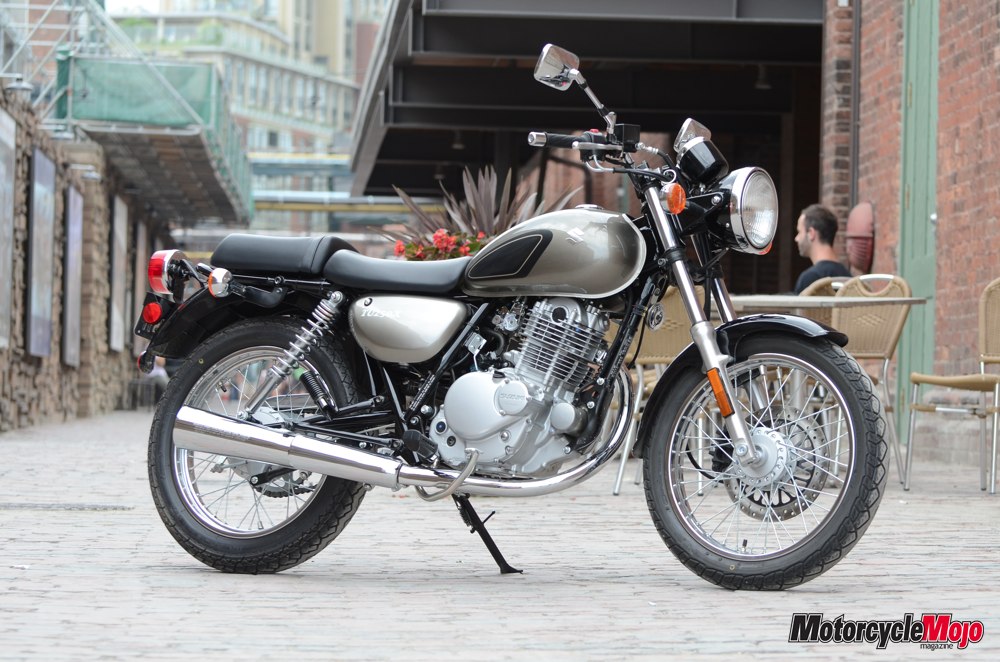 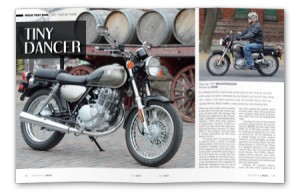 There are times when you’re smarter to zig when everyone else is busy zagging. At least, that’s the strategy that Suzuki has deployed in the increasingly competitive small-displacement segment. More retro than modern in appearance, Suzuki’s TU250 is a motorcycle that shuns the high-tech, high-performance persona of other bikes in the category and provides a classier alternative for the more reserved buyer.

It’s great news for motorcycling in general that a variety of small-displacement motorcycles are even available. A healthy, entry-level class, which appears to be on the rebound in recent years, is essential to the longevity of the sport. For a while, the only options available for first-time buyers were those horrible mini-cruisers that every manufacturer felt compelled to build (my apologies if you own one of these fine machines). Although they may have satiated the aesthetic needs of some riders, their riding positions and cramped dimensions hindered new riders who were developing their skills. 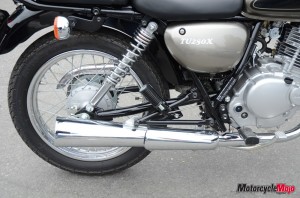 Avoiding the all-out donnybrook currently raging between the sportier Honda CBR250R and Kawasaki Ninja 250R, the TU250 takes another road by retaining its appearance of a classic motorcycle. All the hallmarks of a vintage design are there: spoked wheels, a round headlight, an ample seat and a low-hung exhaust. The only thing missing is a kick-starter (there is a plugged opening in the engine case for one). And of course there has to be chrome. The TU250’s chrome-plated wheels, mirrors, fork tubes, and exhaust are nicely balanced by its polished crankcases and sophisticated grey and black paint.

Despite its compact dimensions, the bike does a good job of accommodating riders of all sizes. The two-piece seat, which at a glance mimics the bench seats of classic bikes, is comfortable and offers room for movement. At 770 mm above ground level, it will allow most to firmly plant both feet at a stop, which is an important characteristic for a motorcycle that is meant to build rider confidence. 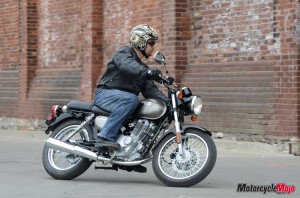 My only critique of the TU250’s seating arrangement is that the handlebar is too low, but don’t let that dissuade you. The Suzuki’s riding position is stellar if you’re shorter than six feet tall. And if you’re built like André the Giant, a little time and money spent on the handlebar will make everything right as rain.

The instrumentation, a single pod with an analog speedometer, is as basic as it gets – a trip meter is its only luxury. The rudimentary warning lights include a low fuel indicator in lieu of a fuel gauge; it was difficult to see on sunny days.

The engine bolted to the bike’s diamond-shaped steel tube frame is described by Suzuki to be “a modern, fuel-injected single cylinder.” The 249 cc, single-cam engine has been tuned for city riding, so it’s biased toward producing more low-end torque. The engine features a digital ignition system, but its most important – and most limiting – characteristic is that it’s air-cooled. Although made from “Suzuki Composite Electrochemical Material” for better heat transfer, the engine can’t match the power output of Honda and Kawasaki’s liquid-cooled machines.

The bike’s power deficit is most noticeable at top speeds, which are considerably lower than those of the competition, and is determined by a rider’s weight, the road’s grade, and the direction and speed of the wind. To boost your speed, simply catch the draft of a passing vehicle and laugh as the speedometer begins to climb. Clinging to the small Suzuki like a jockey on a race horse revived memories of my first motorcycle, when I had to compress my body into the machine, use the pillion pegs as makeshift rear-sets, and rest my helmet on the fuel tank just to reach and maintain a top speed.

There’s little point in discussing throttle response and fuelling with respect to the TU250. Although the dual valves in the 32 mm throttle body and electronic fuel injection combine to provide a smooth and linear control, this bike is mostly ridden with the throttle in one of two positions, either fully open or fully closed. And to get the most from the small engine, the gearbox needs to be worked hard; dropping down a gear to generate anything resembling acceleration is the norm, and an absolute must when passing other vehicles on a two-lane road.

Initially I thought that the bike’s lack of a sixth gear was a problem, because of the vibration that started up when running with a wide-open throttle. An overdrive gear, I’d thought, would nicely quell the thumper’s high-rev vibes, but in truth, it’s unlikely that the engine could effectively use an even taller gear.
Not helping performance matters is the restrictive exhaust system, fitted with a catalytic converter and an oxygen sensor feedback system meant to reduce nasty emissions. As expected, the exhaust note was an antithesis of aural porn. The TU250’s soundtrack is more likely to evoke images of fishing with a small outboard motor than tearing down the road on an exotic racer. Still, its subtle chuffing is melodic and friendly, and effectively calmed my inner demons instead of provoking them.

Weighing a feathery 148 kg (326 lb.) wet, the TU250, with its short wheelbase, manoeuvres on its nose like a wheelbarrow. The quick steering is a boon for zipping around slow-moving traffic and makes riding a motorcycle as effortless as it gets. The bike turns so easily that during aggressive course changes it felt like the bike wanted to flop onto its side, but none of this sprightly behaviour affected straight-line or high-speed stability.

The brakes, in brief, were adequate to the task. Expectations for the single front-disc and rear-drum setup were never high; as expected, there was little feel at either lever, and it took a good firm squeeze to shave off speed. Looking at the glass half full, they won’t catch an inexperienced rider out in a panic situation.
According to Suzuki Canada, the TU250 has been selling well, and not surprisingly, it’s become a hot-ticket item for motorcycle training facilities across Canada. From its tractable, mild-mannered engine to its lithe physique, the TU250 is an ideal fit for any new rider. And as a bonus, it’s a robust bike, too. I was told by someone who knows that very few bits will break off if it’s tipped onto its side.

It would be a mistake to dismiss this Suzuki’s role as being limited to neophytes in need of an unintimidating entry-level machine. As an experienced rider, I found it to be a back-to-the-basics, feel-good machine. I can certainly see its usefulness as a second bike, especially in the role of commuter, where its 12-litre fuel tank and fuel-efficient engine (3.48 L/100 km) will give scooters a run for their money at the pumps. Long highway jaunts, although certainly within its realm, were taxing – admittedly more so for me than the machine. It was within the city limits that the bike really came into its own, making it a good choice for the budget-conscious urban dweller.

For all of its virtues, I have one concern with the motorcycle: a 2012 TU250 has an MSRP of $5,299. That’s $300 more than Kawasaki’s Ninja 250R and $800 over a Honda CBR250R. I did find dealers that were selling new 2011s for $4,495, but even at that significantly reduced price, you’ve only matched the cost of the Honda, which in many ways is a more advanced machine. Will this really matter to those who prefer a more classic and distinguished exterior? Probably not. Motorcyclists, like lovers, rarely worry about their wallets when it comes to matters of the heart.