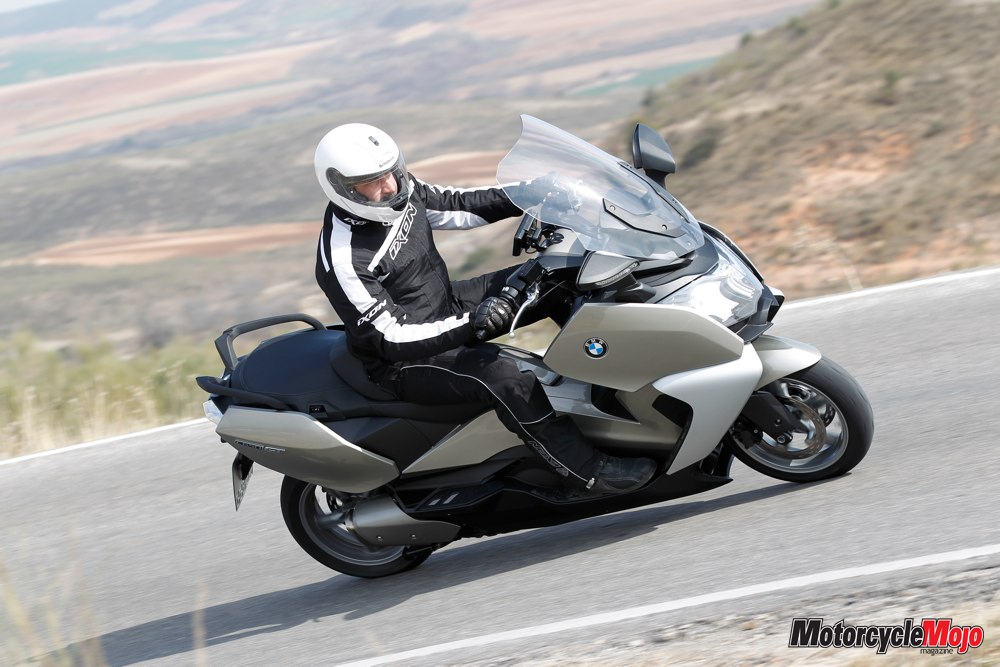 While nodding and acknowledging my conversation with a couple of BMW Motorrad Canada’s reps during the Montreal Motorcycle Show last February, I couldn’t help being distracted by conversations going on beside me. I kept noticing the constant flow of attendees coming up to the BMW kiosk to ask why the firm’s new maxi-scooters weren’t at the show.

Patrons wanted details; they wanted to sit on the new machines; they asked for info on storage capacity and performance. One older gentleman, a current Suzuki Burgman owner, wanted one because he said it melded the traits of a machine that met his current criteria (step-through design, automatic transmission and long-distance capability) with those of the bike he began riding in the 1970s, a BMW.

Not long ago, it would have seemed odd that the most anticipated new model to come from BMW would be a scooter. But the company that once produced only air-cooled Boxer twins hasn’t shied away from diversity, and in the last few years has produced dirtbikes, sportbikes and luxury tourers using singles, parallel-twins, inline-fours and sixes, and of course, the traditional Boxer twins. But to understand why the new maxi-scooters have stirred so much interest, you must first understand the European motorcycle market. 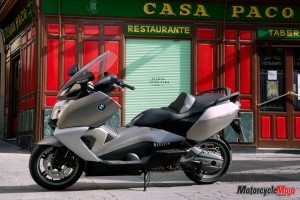 Most European riders are the polar opposites of their North American counterparts. Here, two-wheelers are primarily used for recreation – mostly for casual weekend rides and touring. In Europe they are workhorses, most often for commuting and the humdrum of daily chores. Scooters are popular across the Atlantic because of the highly congested city centres, where they are regarded – rightly – as much more practical than cars. People riding them are not your typical motorcycle enthusiasts; they are office workers, labourers, businessmen and women – many of them wearing business attire beneath their riding gear. And in most parts of southern Europe, the riding season spans the entire year.

The bike I’m riding here in Spain, the tour-oriented C650GT, shares its undercarriage with the sportier C600 Sport. It uses an identical 647 cc, parallel-twin engine with cylinders canted forward 70 degrees to lower the centre of gravity. It uses a 270-degree crankshaft, a design similar to certain Triumph twins and to the Yamaha Super Ténéré. This crank layout gives the engine a lumpy, V-twin-like firing order, and also boosts bottom-end torque compared to a 180-degree crank. Twin counterbalancers are used to smooth vibration. The engine produces a very rewarding 60 hp, with torque peaking at 48.7 ft-lb at 6000 rpm. 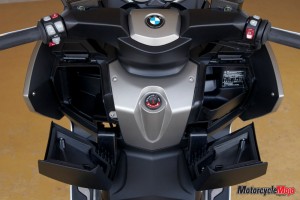 The transmission is a simple CVT, using a dry, centrifugal clutch to engage the engine automatically and a rubber belt and moveable pulleys to vary ratios. Like the Burgman, it has no selectable riding modes; this makes for improved reliability, and is another indication that BMW has focused this new scooter at the European market; riders there care little for frills and more for trouble-free operation.

Power is transferred to the rear wheel by a low-maintenance drive chain enclosed in an oil bath. No external provisions for adjustment have been made, but rather, replaceable chain guides of different thicknesses can be installed if too much slack develops. The oil bath keeps the chain well lubed and cool, and the countershaft sprocket is located on the swingarm pivot, thus maintaining constant tension throughout the suspension travel. These design features are supposed to greatly extend the life of the chain. Inspection intervals will vary depending on how hard the scooter is ridden, though I was told the chain should be checked every 10,000 km.

The chassis consists of a tubular-steel forward frame section, which includes the steering head and a cast-aluminum rear section in which the swingarm pivot is housed. The engine ties the two frame sections together as a stressed member, and the whole assembly is remarkably rigid. A 40 mm, non-adjustable inverted fork is up front, while a single, horizontally mounted shock, adjustable only for preload, is at the rear. The C650GT uses identical chassis geometry and suspension settings as the C600 Sport. Claimed curb weight is 261 kg (575 lb.).

The C650GT feels big and wide when you are seated on it; the riding position is upright and almost cruiser-like. The handlebar angles back and is an easy reach, placing your arms in a relaxed, neutral position. An adjustable bolster on the rider’s portion of the seat provides a comfy perch for your backside, making the GT feel every bit the touring bike it is.

Instruments include a large analog speedometer, and there’s very little emphasis on the tachometer, which is a small LCD bar display to the left of the speed counter – there are, after all, no gears to shift. A large, LCD bar-type fuel gauge is adjacent to the speedometer, and other info, like temperature, fuel economy and tire pressure, can be scrolled up using a rocker switch on the left handlebar.

Since scooters do not have a solid connection between the engine and the rear wheel, as motorcycles with manual transmissions do when they are in gear, you cannot leave scooters in gear on a hill to prevent them from rolling off the side stand. Many scooters have a manually operated hand brake for this purpose. BMW engineers have taken this one step further, and have incorporated the hand brake into the side stand. As soon as the side stand is deployed, the rear wheel locks; a very simple, yet effective feature that will probably save some riders the embarrassment of having their scooter roll off the stand in front of a busy restaurant terrace. For those who want to avoid the situation altogether, there is also a centre stand.

The large fairing includes an electrically adjustable windscreen, operated via a rocker switch on the left-hand switch pod. Needless to say, even with the screen in its lowest position, the C650GT offers better wind and weather protection than most motorcycles, rivalling many full-scale touring bikes. Raising the screen (it has a 100 mm range) reduces the windblast at the helmet, though when it is at its highest position, I’m forced to look through it, something I prefer to avoid. Fortunately, the sweet spot for me was somewhere in between, where I could see over the top while reducing the windblast and maintaining minimal buffeting.
This maxi-scooter has big-bike performance, easily out-accelerating cars from a stop. On the winding roads in the hills north of Madrid, the GT rewards with sporty agility that, with an experienced rider at the helm, can put to shame some sportbike riders. It turned in more quickly than I’m accustomed to on a motorcycle, mostly due to its 15-inch wheels and very low centre of gravity.

If you ride large-displacement scooters, you know that they do not react to engine braking the way motorcycles do. Engine braking increases progressively as they slow down, and then they freewheel when the automatic clutch disengages, which makes low-speed manoeuvring in traffic awkward. Fortunately, the BMW scooter’s clutch disengages at speeds below 25 km/h, a higher threshold speed than on other maxi-scooters I’ve ridden, making slow-poking in traffic much smoother and with less helmet bunting when carrying a passenger.

Acceleration is seamless, as expected from a CVT transmission, and at highway speeds, the C650GT is almost electric-smooth. It is actually quite comfortable for highway cruising, and in the single-digit morning temperatures I experience in Spain, the optional heated seat and grips provide toasty comfort. The mirrors provide an unobstructed rear view for making those swift, last-minute lane changes. Powerful brakes haul the bike to a stop effortlessly with light lever effort, and ABS is standard.

An added bonus for touring riders is the under-seat compartment, which boasts 60 litres of storage. There are also two, relatively large storage compartments located in the fairing’s inner panel. If more storage is needed, there is an accessory top case available that doubles as a passenger backrest.

BMW’s second attempt at a mass-production scooter will definitely be more successful than the ill-fated C1 – you remember the C1, don’t you? It was the enclosed scooter BMW produced between 2000 and 2002, though it never made it to North America. I also suspect the C650GT will do better in Canada than the C600 Sport, primarily because it is a more practical mount for covering long distances, and sporting riders would probably opt for a sportbike anyway. And despite its penchant for touring, the GT doesn’t give up much in the way of performance and handling to the Sport. Pricing, not yet determined, will be an important factor in its success; how it will stand up to its main competitor, the tried and tested Suzuki Burgman, which has been refreshed for 2013, only time will tell.

Unfortunately for BMW’s Canadian distributor, the new C650GT maxi-scooter, as well as its C600 Sport brother, won’t be coming here until sometime in early 2013. The machines were originally scheduled to arrive in late summer 2012, but the company dedicated early production to the much larger scooter markets in Europe, namely Spain, Italy and France, where 70 to 75 percent of C-model production will be heading. The remaining 25 to 30 percent of production is slated for the rest of the world, including Canada, which is why Canadian riders will have to wait. But after riding it, I think the wait may be worth it.