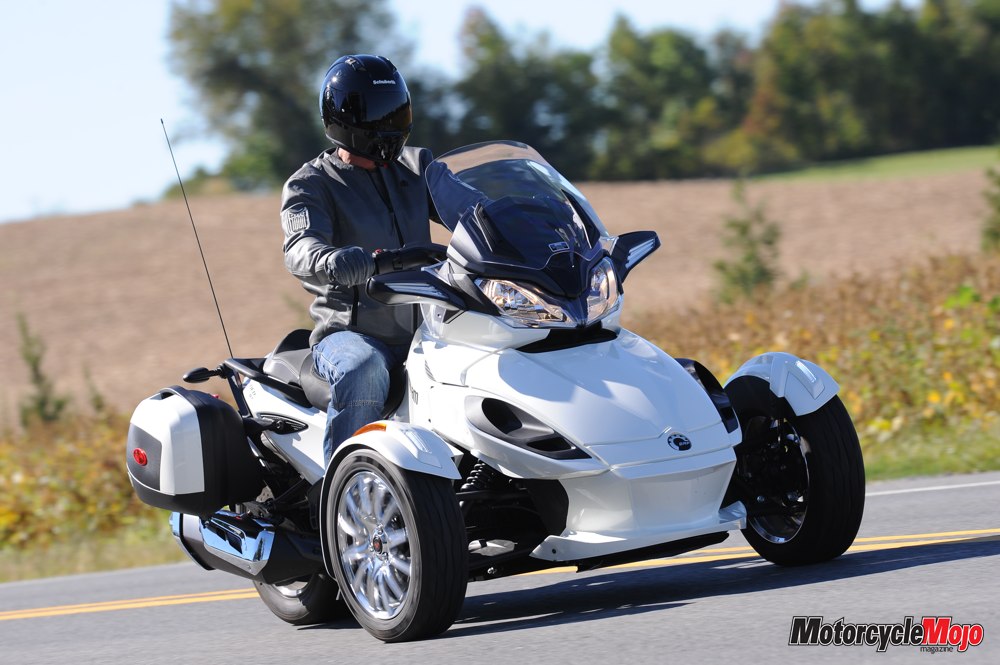 BRP found a hole in their web so they designed a Spyder to fill it.

It’s no secret that BRP is a progressive and fast-moving company in the world of personal motorsports. Beginning in 1958, Bombardier’s first paradigm shift was with the Ski-Doo, when they made it possible to replace the dog sled with a motorized snowmobile. Since then the company has changed the way we think about many other genres of personal travel. For instance, the introduction of the easy-to-ride, sit-down Sea-Doo all but eliminated the unmanageable, stand-up Jet Ski, and at the same time increased personal watercraft sales by a whopping 400% according to BRP officials.
The company’s release of the Can-Am Spyder once again provided a fresh perspective on road travel. The three-wheeled Spyder allows people to live a little, and instead of being enclosed in a car, offered an exciting and accessible way of experiencing the fun and excitement that a motorcycle has to offer, with no fear of falling over.
Since 2007, when the first Spyder RS Roadster was released, the company has announced three distinct platforms in the Roadster line-up in the past five years, and each platform encompasses varying models distinguished by trim level packages and available options.
There have been many upgrades across the complete line of Spyder models for 2013, and we’ll look at those shortly, but the biggest news is the introduction of a completely new model, the Spyder ST. BRP’s market research revealed a substantial hole between the sporty performance bias of the RS Roadster and the ultra-comfy, touring RT models. 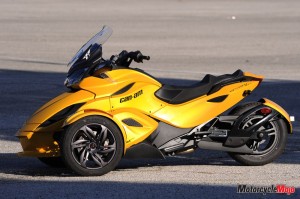 The new ST complements the rest of the Spyder line-up as it bridges a gap between RS and RT, bringing an all-new, sport-touring machine into the collection of three-wheelers. As expected, the ST has a more relaxed riding position than the aggressive stance of the RS. Foot pegs on the manual shift models, or the all-new footboards on the SE5 semi-automatic, are a full 12.7 cm (5 inches) farther forward than the RS.
Not only are the rider’s knees much more relaxed, but the handlebar has been moved back 10 cm (4 inches) and higher by 8.5 cm (3.3 inches) for a more upright and comfortable riding position, although this is still a slightly more aggressive position than the touring RT Spyder.
The ergonomic differences between the RS and the ST are immediately notable, and riding the machines back to back proves a huge improvement in long-term comfort, as your legs are more comfortable and your hands rest easily on the hand grips.
The ST’s new sport-touring seat is thicker than the RS’s and offers more support, while still allowing the freedom to slide over and lean when the need for more aggressive cornering arises. I found the seat on the ST comfortable, but I really didn’t spend enough time planted on one to find out how long the comfort would last. I expect, however, that the seat would be ideal for a few hours at a time and would serve well on long-distance jaunts. For those who wish to pack for extended periods on the road and don’t think that the 44 litres of under-the-hood storage would be enough, the ST will accept accessory hard bags (the ST Limited comes standard with these), and the ST line-up can also take BRP’s optional 622-litre trailer. 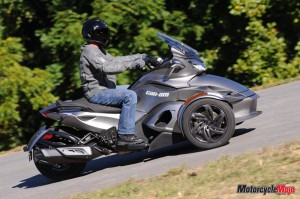 Weather protection was also front and centre in the ST’s design, compared to the RS’s minimal wind deflection. The ST has removable wind deflectors above and below the new aerodynamic mirrors to keep undesirable wind off of the hands, but the most significant item on the ST’s roster of weather-protective items is the five-position windshield, which offers 10 cm (4 in.) of travel and does an excellent job of protecting the rider and passenger from the elements. The screen’s wind protection is quite noticeable from the lowest to the highest position, and I didn’t experience any significant buffeting when it was in its upper reaches. Unfortunately, the windscreen is manual and we were told we needed to use two hands, one on each side, with just a little wiggle and upward or downward pressure to overcome the detents. I don’t always believe that electronic gadgets make for a better riding experience, but needing two hands to adjust the screen means having to stop your ride to make the adjustment, which is annoying. The RT features an electric windscreen, so maybe that will filter down to the ST in coming years?

The 998 cc, V-twin Rotax is the same engine used in all of the 2013 Spyders. During our first few kilometres I thought the engine was a bit of a dog, until I was told that to get the most out of it, especially while accelerating and shifting, I needed to keep the engine rpm to at least the 5500 mark. This was a valuable piece of advice and changed my whole outlook on the Spyder’s powerplant. While the V-twin’s torque maxes out at a very respectable 80 ft-lb at 5000 rpm, horsepower kicks it up a notch above that to hit its ceiling of 100 hp at 7500 rpm. The Spyder is quite happy shifting in that range, and the added revs certainly make the riding experience more fun if you enjoy quicker acceleration. Engine speed tops out at a redline of 9000 rpm, and I didn’t feel any vibration throughout the V-twin’s rev range.

Shifting was flawless on both SM5 manual and the SE5 semi-automatic transmissions, although on the only manual transmission I rode, I found that the clutch’s friction point was at the very end of the lever’s travel. Personally, I find it harder to modulate a smooth, quick getaway when the lever is fully extended, with such a condensed friction zone. Both transmissions have an electric reverse gear that aids considerably in the vehicle’s manoeuvrability. The semi-automatic SE5 uses a paddle shift activated by the left thumb for upshifts, or the left forefinger to downshift. A nice feature in the SE5 is that if you forget to downshift, the transmission will do it for you, so you are always in the proper gear in case you need to accelerate quickly in an emergency or from a stop.

The new ST comes in three flavours. The base ST comes with all of the above-mentioned components as well as the basic Spyder amenities that the vehicle is well known for, like the Bosch Vehicle Stability System, which incidentally has been improved for all 2013 machines. Also introduced in all 2013 Spyders is ride-by-wire throttle control.

Next up on the ST model scale is the ST-S. This includes the new, aerodynamic front fender design which, according to BRP, results in a 5% fuel saving by capturing less wind. Also specific to the ST-S is a trim package that includes painted extras and carbon-black finish on the wheels, handlebars and many other components. Cruise control is also standard.

The top of the line ST-Limited comes with lockable and removable panniers holding 68 litres, an audio package, a preinstalled Garmin Zumo 660 GPS, heated grips and a 12-volt power outlet. Twelve-spoke chrome wheels and a few other amenities round out the Limited’s upgrades.

While the ST is big news in the BRP Can-Am camp, many other modifications across the board for 2013 are also quite exciting. Every model receives Brembo brakes front and back. The new, 4-piston fixed calipers up front and single-piston floating caliper out back are paired with 270 mm rotors all around, and along with upgraded Bosch ABS, they are said to reduce braking distance by 10%. That’s a pretty significant upgrade to an already excellent braking system.

The base models in all three families still use the original front fenders, but as mentioned earlier, upgraded models receive aerodynamic front fenders that tightly hug the tires.

Depending on the model, many colours are available, as are a number of accessories that include various sizes of windscreens, Akrapovic exhaust and additional lighting options. There’s even a very trick, three-axis, adjustable handlebar system for the RT. And many of the accessories in the 2013 catalogue will also fit previous Spyder models.

BRP acknowledged to us at the world dealer meeting and press launch that more innovative releases are on the horizon for this progressive company – I heard talk of a Hybrid Spyder within the next few years. Very exciting news for this Canadian company headquartered in Valcourt, Quebec.