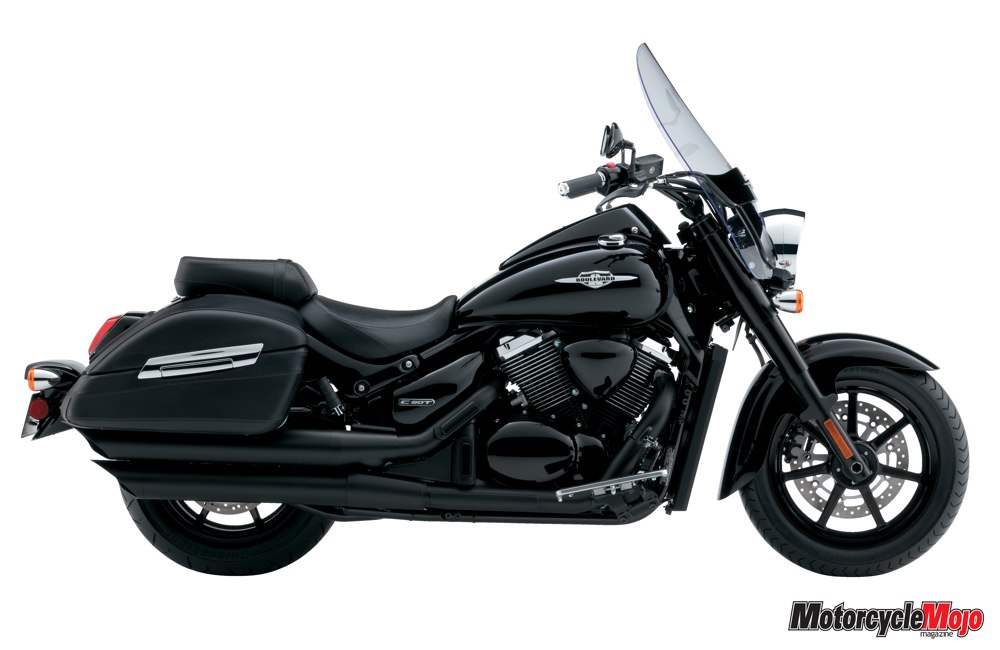 It had been a long time since I’d left home for a ride without taking a map or my GPS, and I have to say, I should do it more often. The opportunity to do so came late last autumn, when Suzuki invited Motorcycle Mojo to Mont-Tremblant, Quebec, to ride the 2013 Boulevard C90T.

No route had been planned, just access to the bike and hundreds of kilometres of winding, if somewhat bumpy country roads through the Laurentians, located about an hour north of Montreal. Being familiar with the region after years of exploring it, I had deliberately left behind my navigational aids.

The Boulevard C90T is being re-introduced in 2013 after a four-year absence from Suzuki’s touring cruiser line-up. Although the C90T looks similar to the 2009 model, it is, in fact, an entirely new machine from the ground up. At 1462 cc, it is now also the biggest touring cruiser Suzuki has available, an accolade previously claimed by the 805 cc C50T, so it’s better poised to compete with other big-bore, tour-oriented cruisers, like the Kawasaki Vulcan 1700 Nomad and the Yamaha V-Star 1300 Tourer.

The biggest change is at the heart of the machine, which uses an all-new, liquid-cooled V-twin that shares only bore and stroke dimensions with the older, air-cooled engine. The new mill uses a 54-degree V angle, whereas the old one had a 45-degree split between the cylinders. 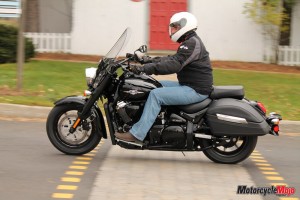 Wheel sizes have also been changed, from the 16/15-inch front/rear combination of the previous model to a 17/16-inch front/rear combo. Touring amenities include new moulded-plastic saddlebags (covered in textured vinyl to match the seat material), rider floorboards and a windshield.

My test bike is all black, including the engine cases, exhaust system, wheels, fork tubes – everything. This blackout treatment is both sinister looking and elegant, and it’s an eye catcher. If you look closely enough you’ll find a couple of sloppy styling faux pas, like the visible aluminum heat-resistant tape that protects the right-hand side cover from the rear exhaust pipe’s heat, and the less than elegant-looking stamped steel windshield brackets. But these are minor gripes about a bike that is otherwise classically styled and well finished. If you find the overabundance of black and the lack of chrome overwhelming, there are also red and black or white and grey versions available with a more traditional aluminum engine finish and abundant chrome trim. Regardless of which model you choose, the price is the same at $13,999. Worthy of mention: the retail price of the 2013 model is $1,000 less than it was in 2009.

Climbing onto the C90T, you’ll find a low, 720 mm (28.3 in.) seat height and accommodating riding position. It’s a relaxed reach to the swept-back handlebar, but the buckhorn bend is very wide, which makes taking U-turns a bit awkward. With the fork turned to full lock, you’ve got to lean forward if you don’t want to lose your grasp on the outside handgrip. The wide handlebar also emphasizes the bike’s substantial girth. It’s a wide motorcycle with a broad, 18-litre fuel tank that spreads your legs a bit. It has gained a few kilos, now claiming a curb weight of 363 kg (800 lb.), an increase of 18 kg over the air-cooled model. It’s a heavy machine that imparts a substantial presence, but the centre of gravity is low, so once you get moving, it is easy to manage the weight. 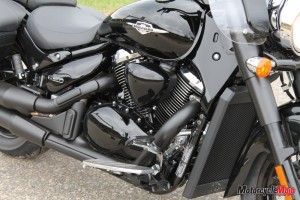 The clutch is cable operated and moderate in effort, though it engages smoothly. Click the heel/toe shifter down, and the bike engages into first gear with an audible clunk. Shifting through the five gears feels robust, and you get both aural and tactile feedback with each swing of the gearshift lever.
I pull out of the hotel parking lot and head south for a few kilometres to join Highway 327, one of my favourite stretches of single-lane tarmac in the area. It winds its way south for about 90 km towards Lachute, and a large portion of it has been recently repaved. The road begins with long, wide sweepers, and the C90T feels right at home, maintaining a solid, planted line through the curves. It accelerates with authority regardless of which gear is selected. As I’m on the lazy side, I sometimes choose to leave it in top gear, even when slowing to 50 km/h as I pass through a town, and the bike does not protest; it just accelerates smoothly back up to speed when the speed limit allows me to. Fuel injection offers flawless throttle response.

The sculpted seat hugs my backside comfortably, though its curved shape limits movement. As mentioned earlier, the riding position is rather accommodating, so there’s no real need to change position on these back roads, but it’s an option I’d probably appreciate during long stretches of divided highway. At least the floorboards allow me to move my feet fore and aft, which is helpful. If this were my bike, however, I’d remove the rear portion of the heel/toe shifter to allow me to move my feet freely; otherwise, left foot movement is somewhat limited.

Wind protection is adequate – about as good as one would expect with such a broad, un-streamlined windshield, which protects the head and chest from a direct windblast, but not the legs. It is not height adjustable, and although I can see clearly above it (I’m six feet tall), a shorter rider will be forced to look through it, not desirable during rain or at night. It also produces measurable turbulence at helmet level. Now, it’s not as bad as I’ve experienced on some other bikes I have ridden with this kind of windshield. All in all, I prefer keeping the windshield (it’s not a quick-release type, so removing it would require some tools), as temperatures during my late-fall ride never rise above the single digits.

Like the windscreen, the saddlebags are removable only with tools, so that stripped-down look is more than just a few minutes away. The bags have a wide opening, but they are not deep, so you might want to look into accessory luggage options if you plan to hit the road for an extended ride.
Still southbound, I reach Arundel, located about halfway between Mont-Tremblant and Lachute. It’s a tiny village with one gas station, a post office and an elementary school, whose sparse population resides along Highway 327. It’s here that I turn westward onto Highway 364 towards Huberdeau, a larger town just west of the Rouge River.

Although I’ve ridden extensively in this area in the past, I usually stay on numbered roads that appeared as thicker lines on a map. This time, I instinctively turn north onto Chemin du Lac à la Loutre, which eventually leads back to the hotel. It’s a much tighter and bumpier stretch of road, lined on either side by trees stripped of their leaves by the shorter autumn days and cool winds. It twists and turns about in a serpentine fashion, and is a pleasant surprise, making its way into my repertoire of worthy roads. Here, too, the C90T surprises.

The non-adjustable suspension is quite yielding, absorbing most bumps without fuss or bother. It’s only on bigger frost heaves that it reveals its limitations, bottoming and bucking me out of the seat. For the most part, however, the suspension is refreshingly compliant.

If the bike is ridden respectably – as designed – cornering clearance is adequate, and only on a couple of occasions, while negotiating decreasing radius turns, do I manage to scrape the floorboards.

A firm squeeze is needed at the brake lever to slow the C90T down from speed, and although the lever is adjustable, even when it’s set for the shortest reach, it’s still too far from the handlebar for a comfortable grip.

I return to the hotel and turn in the keys for what turns out, alas, to be my last ride of the season, and just as rain begins to sprinkle down. The weather turns for the worse in the next few days, and never really offers another opportunity to ride. It was worthy of a season closer, anyhow, as I had little interest in maintaining a sporting pace, mostly due to the autumnal road conditions, but also because I just wanted to take my time to enjoy the ride. And because I had no map or GPS, I discovered a road that will probably be one of the first I visit, this spring.

The new Boulevard C90T proved a fine companion. Although it doesn’t introduce anything new in its segment, it is competitively priced, and is competent enough to merit a gander if a full-sized touring cruiser is in your crosshairs.