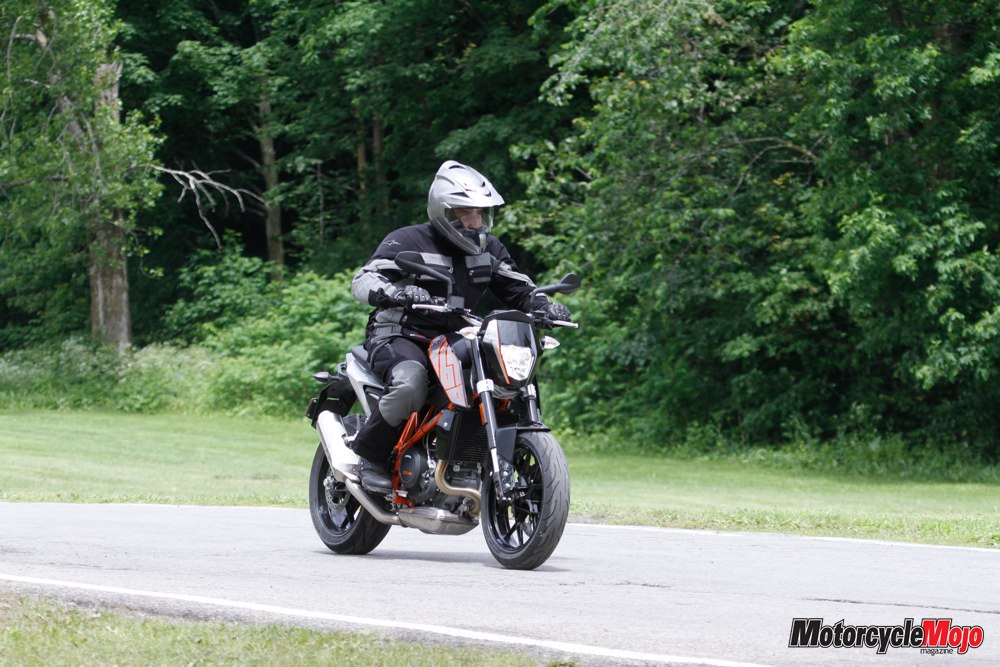 While this bike can tempt your inner hooligan to emerge, it can also deliver an adrenaline-inducing ride without misbehaving 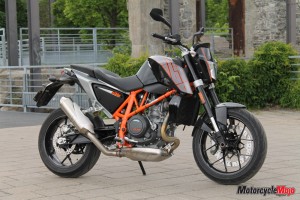 Some motorcycles are like that scruffy kid who used to live down the block, who always egged you on to do mischievous things. You know, the wild child your mom always told you to stay away from; the one who always got into trouble at school, maybe sometimes with the law. And yet, you couldn’t be apart, because there was a certain complicity and understanding between the two of you.

The 2013 KTM 690 Duke ($9,999) is exactly that bike, well, except maybe for the scruffy part. From the first moment you let the clutch out and roll on the throttle, you can almost hear that whisper in your ear coaxing you: “Come on, do it . . . no one is looking . . . I won’t tell.” The urge to wheelie the bike or dart between cars in traffic is almost too big to resist. But age brings wisdom, at least for the most part, and unlike my younger, impressionable self, I didn’t pay heed to the Duke’s persuasive ways. 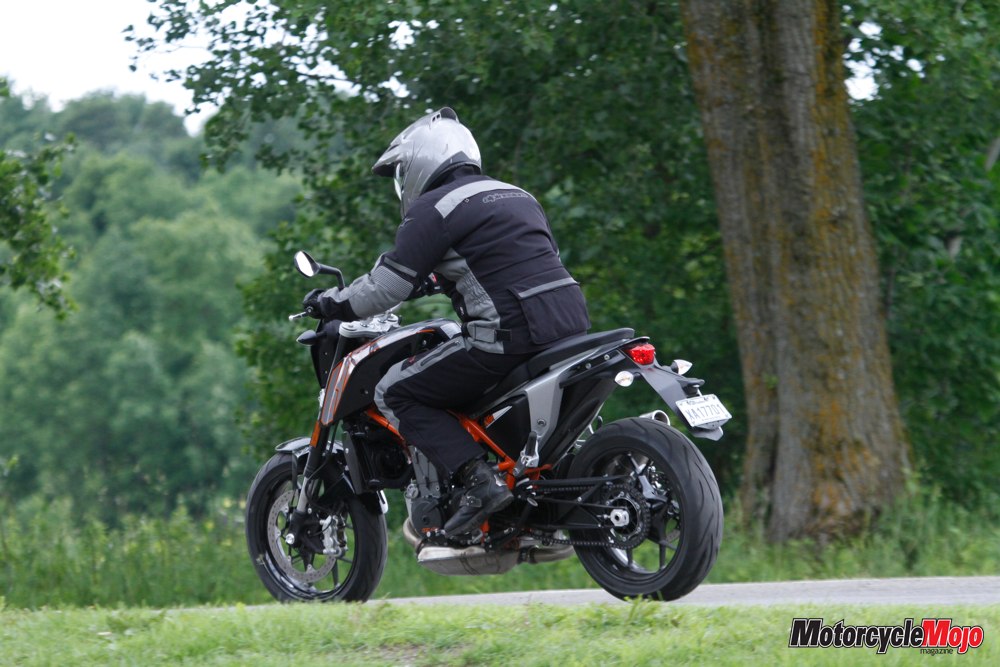 KTM refreshed the 690 Duke in 2012, and it received a few significant changes. Europeans enjoyed the bike last year, but it only came to Canada this year. A reshaped fuel tank, seat, tail section and front fender give it a slightly less spaceship-like, angular appearance. It also got a much shorter headlight nacelle, and the tail end no longer ends in a point. This results in a more streamlined profile and makes the machine look smaller, even though the wheelbase is unchanged at 1450 mm (57.1 in.). The seat has been reshaped and (thankfully) widened, and it also sits 20 mm closer to the ground at 835 mm (32.9 in.). The exhaust has also been redesigned, and now comprises two main chambers, a catalytic converter and muffler located beneath the bike, and a resonator that’s located in the more traditional location on the right side, adjacent to the swingarm. The swingarm itself is a carryover item from the previous Duke, a very unusual, inverted design, with all of its structural ribbing on the outside.

Bear in mind that the bike’s last makeover, in 2008, was a major one. The Duke then received an all-new, 690 cc, single-cylinder engine, and with it came a counterbalance. KTM’s previous single lacked this vibration-reducing device, and it was downright painful to ride any of the company’s machines equipped with that powerplant. Canadians had to suffer the bone-shattering vibration for another year before KTM decided to import the revised Duke.
Another major change that year was the addition of ride-by-wire throttle control, KTM’s first application of the technology. This allowed engineers to include three different throttle maps (soft, standard and advanced), with different power delivery and different peak power outputs to match varying conditions. 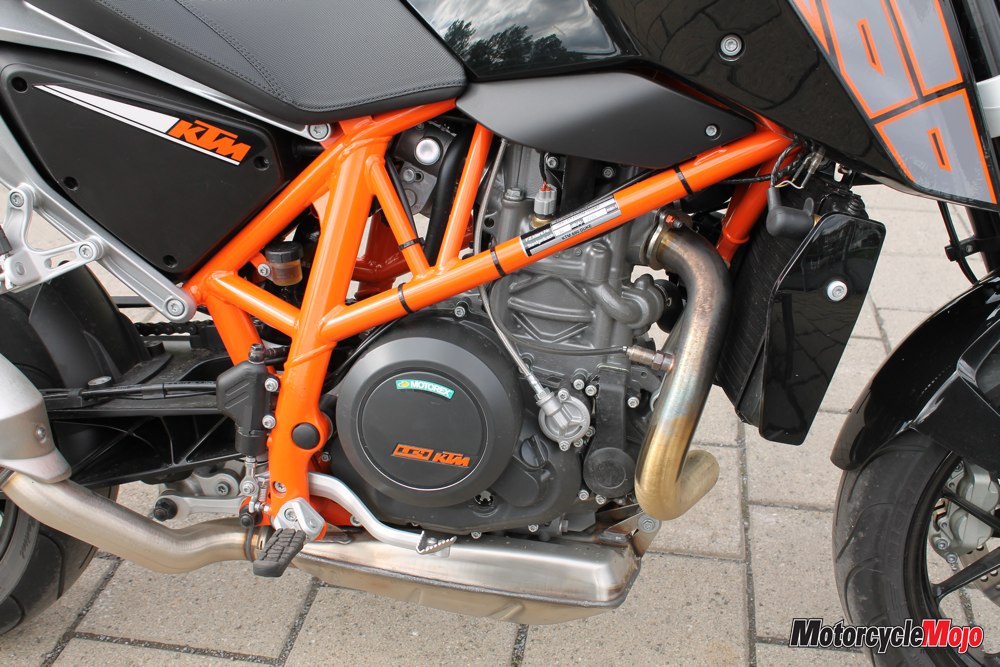 All of these engine features are retained on the latest Duke, though revised engine mapping has smoothed the somewhat choppy throttle response in the most aggressive of three throttle settings, and an additional four horsepower has been added, bringing the maximum output to 67 hp. Now, ponder that number for a minute. Sixty-seven horsepower is very impressive for a single-cylinder engine; it is about as much as Suzuki’s SV650 V-twin produces, and just eight horsepower shy of the 800 cc parallel-twin powering BMW’s latest F700GS. It also produces 51.6 ft-lb of peak torque at 5500 rpm. It’s that bountiful torque and the Duke’s ultra-nimble handling that makes you feel like misbehaving.

The first thing you notice when slinging a leg over the Duke is its condensed dimensions and compact seating position. A wide, tapered aluminum handlebar is just a short reach, and the lowered seat provides a surprisingly close relationship to the footpegs. The new seat is also deeply scalloped and it holds you in one position, more forward than on the previous Duke. The seat provides better support than before, and although it’s still rather firm, you can endure several pain-free hours in the saddle.

Clutch pull is surprisingly light, but tall gearing means you’ve got to slip it a bit to launch the bike from a stop. That tall gearing also means I used only first to third gears around town, and only got the bike into sixth when speeds rose above 110 km/h on the highway. Shifting into top gear below that speed causes the bike to shudder. Some buzzing vibration comes through the foot pegs and handlebar at highway speeds and blurs the mirrors. The vibration is not insufferable, as it was on the older, non-counterbalanced engine, but it’s more than I remember experiencing on my 2008 690 Enduro, which had the same engine.

Acceleration is impressive, and rolling on the throttle from almost any speed that won’t get you arrested provides a forceful forward surge that stretches your arms and has you tightening your grip around the handlebar. Twist the grip with some gusto in the lower gears, and the front wheel heads for the sky.
At an exciting pace on back roads, the Duke handles superbly. Its steel trellis frame is very rigid and responds instantly to steering input. The tallish seat height does make it a long way up, then down again as you lean from one side to the other, but the bike steers exactly where you want to go and transitions through esses with remarkable quickness. It’s easy to tighten up your line mid-turn, and the bike responds well to late trail braking.

On twisty roads I used mostly fourth gear, in the most aggressive power mode, and just let the tach needle sweep up and down across its face between turns. On tighter turns, banging the shifter down a gear or two and letting the slipper clutch and massive Brembo radial-mount, four-piston caliper do their thing made corner entry smooth and safe.

Having caught a fair amount of rain during the test ride, I was glad to have the option to select different power curves, and when the roads were wet, I switched to the softest mode, which really smoothed out the throttle response and reduced the stress. One gripe I have with the power modes is that the dial to change them is inconveniently located under the passenger seat; it’s time KTM moved this switch to the handlebar for easier access. Another stress reliever in the rain is the standard ABS.

The downside of this ultra-nimble handling is a slight tendency to twitch when cruising on the highway, due mostly to the combination of exaggerated leverage on the wide handlebar and aggressive steering geometry. And on the highway, you’ll also have to deal with the lack of wind protection; this is, after all, a naked bike, and not really the best machine to cross the country on. Stay in the city, however, and you’ll be smiling all the way to work.

The suspension, provided by WP, is on the firm side, and I often found myself catching air off sharp bumps. It does hold the machine firmly through a chosen line in a sweeper at speed, and returns reassuring feedback. Adjustment is limited to rear preload.

Despite the engine’s impressive output, it is surprisingly frugal, and I averaged 4.6 L/100 km (61 mpg), with a relatively enthusiastic throttle hand. This gives the bike a reasonable cruising range of 300 km from its 14-litre fuel tank.

The KTM 690 Duke is loads of fun to ride, but it does force you to make a few compromises. The riding position is a bit cramped for taller riders (I measure six feet), and its firm suspension and lack of wind protection make it a real challenge on long rides. Passenger accommodations are even tighter than for the rider. It will reward you with precise handling on winding roads, and if your friends ride sportbikes, they might be envious when you throttle away in the really twisty stuff. The only other compromise you might have to make is that your driver’s licence will be in peril if you fall prey to its temptations.