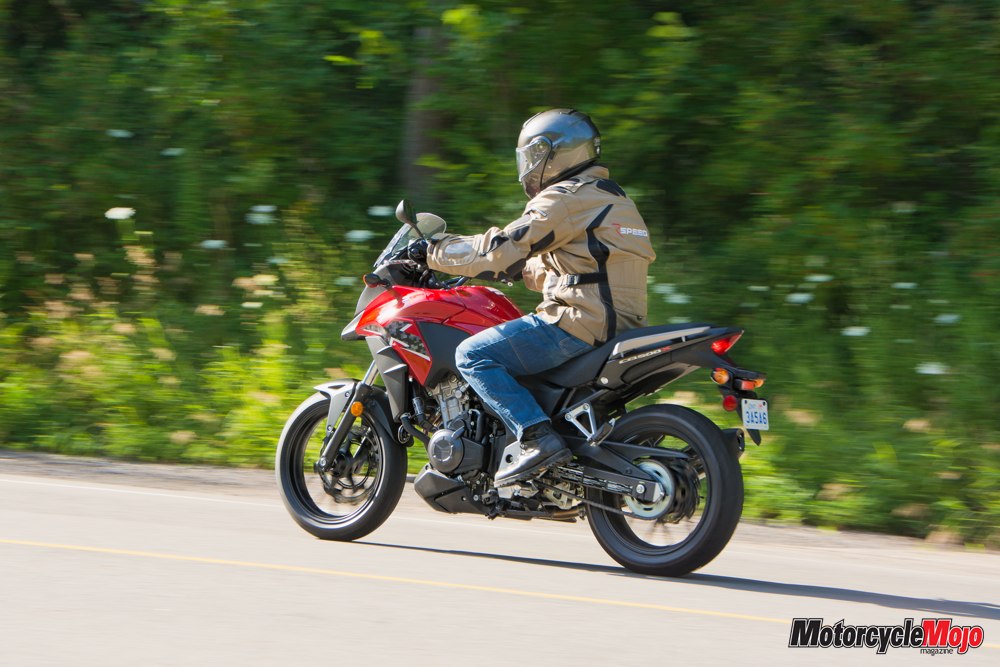 The third model in the CB500 has finally arrived, and it was worth waiting for

In recent years, Honda has been releasing new models at a feverish pace, some targeted directly at the new or re-entering rider. First was the CBR125R, and then hot on its heels, the CBR250R, both of which experienced brisk sales in Canada.

Then Honda released the NC700S and NC700X, easy to handle and ideal motorcycles for those wanting to return to riding, or who were in the market to move up in engine size. The NC700s were also very desirable for the experienced rider, with unheard-of fuel economy.

All three models are based on the same platform, with suspension and bodywork the biggest differences. We offered a quick ride report of the R and F models in the July 2013 issue, but at the time of riding them, we were told that the X wouldn’t be available until later in the summer.

When the call came in from Honda Canada that the CB500X had just arrived at corporate headquarters and asking if we wanted to test it, we jumped at the chance and snagged the first ride in the country. 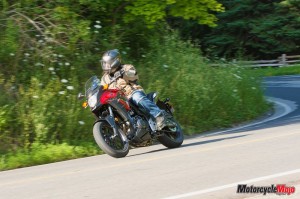 I was looking forward to spending more time on the 500, as my previous rides on the F and the R models didn’t amount to much time in the saddle – just enough to whet my appetite.
In the July issue’s quick ride report, I noted that the F was more a naked bike, with minimal bodywork, and that the R leaned more on the sporty side, while seating positions on both were similar, with a slight lean forward. The newly released X, on the other hand, is fashioned after the adventure-touring style, offering a seat height 25 mm taller and a straight-up seating position that keeps your lower back straight. Your hands fall naturally on the taller handlebar’s hand grips, and feet are comfortably placed on the foot pegs directly below your hips.

The powerplant is the same for all three models. The 471 cc twin uses a 180-degree, phased crankshaft that naturally cancels most of the vibration, but some always gets through, so a balance shaft quells any errant vibes. The result is a vibration-free rpm range up to about 7000, at which point I could barely feel the slightest vibration in the seat.

The engine also uses some high-end supersport technology and shares some parts and manufacturing processes with the CBR600RR and the CBR1000RR. 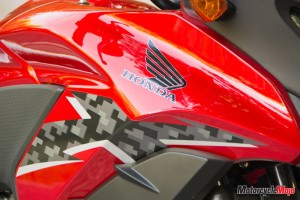 Throttle response is exact and smooth. The power delivery is unintimidating and linear, making it a user-friendly engine for any level of experience the rider may have. While the engine doesn’t like to be lugged at low rpm, it accelerates quickly up in the 6000 to 8000 rpm range, and it doesn’t mind being there. Regular highway riding at 80 km/h in top (sixth) gear delivers a modest 3800 rpm, so a downshift or two is helpful to quickly pass other vehicles.

Shifting is smooth and quiet, and the easy-to-pull, cable-operated clutch shouldn’t cause any sore hands, even in stop-and-go traffic.

The front and rear brakes are the same units found on the NC700 models. The non-adjustable brake lever requires only a modest squeeze to put the dual-piston caliper into action and quickly shave off speed. The CB500X comes standard with ABS. Putting that braking power to the pavement are Pirelli Scorpion Trail tires. Because the X is a pseudo-adventure bike, the tires are more aggressive than those on the R and F models, but since both front and back remain 17 inches, care is still needed in anything rough, including loose gravel roads.

The suspension is basic, with a 41 mm, non-adjustable fork up front and preload-adjustable mono-shock out back. It is compliant and even comfortable over normal road imperfections, but can deliver a healthy jolt if a good bump is hit. I never bottomed out, but it did teach me to look out for road-settling over a culvert. The X has an extra 17 mm of front-end travel compared to its two CB500 counterparts.

Both high- and low-speed handling were more than acceptable. Just a slight push on the hand grip is all that’s needed to bank into a corner, and the light weight and generous turning radius allows easy feet-up U-turns.

Switchgear is minimal with the exception of four-way flashers, which stay flashing even after the key has been turned off. The powers that be at Honda decided a few years ago to exchange the location of the traditional horn button with the turn-signal button, so if you are not familiar with the newer Hondas, you may find yourself hitting the horn while trying to signal until your muscle memory gets it figured out.

The instrument cluster is easy to read and well laid out, with the fuel gauge on the far left. Beside is a digital sweep tach, and in the centre are the large speed numbers, with time and various display functions taking up the right side. Display functions include odometer, two trip meters, instant and average fuel economy, and litres consumed, and are selected with large, glove-friendly buttons.

The small windscreen has an adjustment range of 40 mm, and you’ll need a torx bit to adjust it. In its highest position, it kept the wind off of my chest, with the breeze hitting the bottom of my helmet. While the gathering of wind increased the noise inside my helmet somewhat, I didn’t feel any buffeting whatsoever. A number of accessories are available for the X model, including a taller windscreen.

Overall, the CB500X is very enjoyable to ride; the riding position is comfortable, the instrument cluster is easy to read, the controls easy to access. I did find the seat a little uncomfortable after a couple of hours, but there is plenty of room to move around. At 17 litres, the fuel tank holds 1.5 litres more than its two counterparts, and the engine returned an impressive fuel economy of 3.5 L/100 km (79.8 mpg).

All in all, it offers a great all-round riding experience. Any of the models in CB500 family should appeal to a large market segment. The engine is fun and should be enough to keep an experienced rider entertained, providing you aren’t looking for racetrack speeds, and because the engine is so easy to operate and it is not intimidating in the least, it should also be an easy option for someone getting into the sport.

Make sure you get all of the story – Subscribe Today!