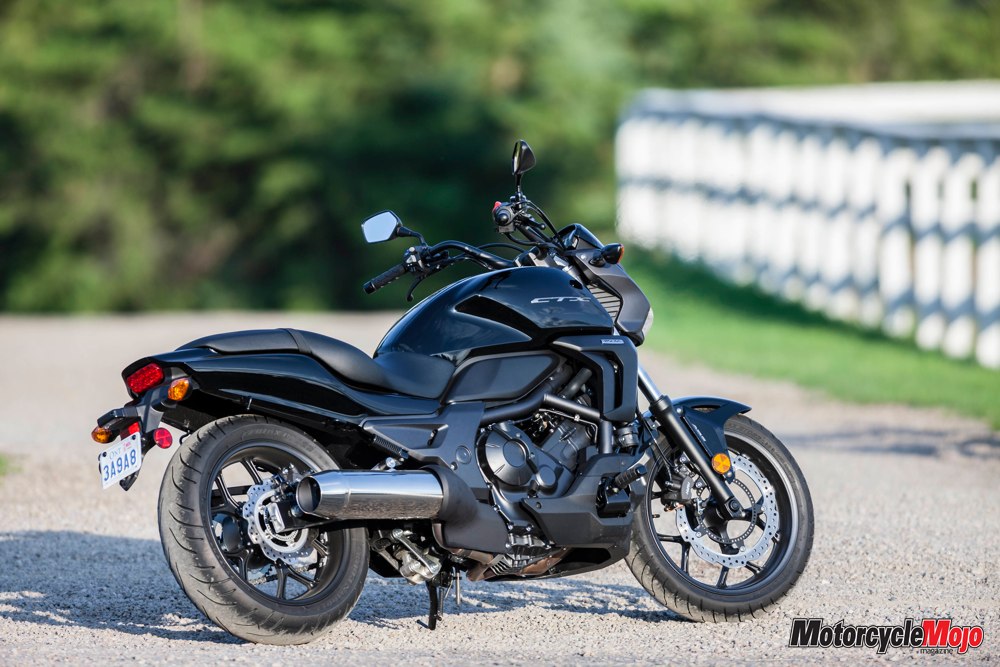 Honda builds on the success of the NC700 and introduces a practical, everyday bike for the masses

Honda was on a roll in 2013, with no less than nine new model introductions, including a couple of scooters. The streak continues into 2014, with even more new bikes launched: the entry-level (and really cool-looking) Grom, and two CTX700 models, both of which I sampled at a Honda shindig held in Quebec City earlier this year.

Honda seems to be focusing on a forgotten segment of the riding population – the beginning rider – and many of the new bikes are priced within the reach of new riders; they also have low seat heights and are easily manoeuvrable, thus making them accessible to the masses. Despite their user-friendly nature, they’re also engaging enough to entice riders with more experience.

The 2014 CTX700N and CTX700T follow that formula and are based around the NC700 twins introduced in 2012. According to Honda’s press literature, CTX stands for Comfort (low seat; upright riding position; no vibration), Technology (advanced, fuel-efficient engine; low centre of gravity; ABS) and eXperience (confidence-inspiring, agile handling; stable; easy to ride). They share the NC700’s chassis, brakes, wheel and tire sizes, and the 670 cc, liquid-cooled parallel-twin. Claimed output is 47 hp at 6250 rpm, with torque peaking at 44 ft-lb at 4750 rpm.

Certain chassis components are shared with the NCs, but the rear subframe is lower, giving the bikes an elongated, low-slung look reminiscent of the unpopular DN-01. The CTX also has a substantially lower seat height, placing your backside just 719 mm above the ground, 70 mm lower than the NC700S and 110 mm lower than the NC700X. 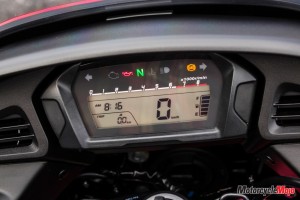 The CTX700T is the more touring oriented of the two, with a frame-mounted half-fairing that borrows some design elements from the Gold Wing F6B, like the shorty windshield and side louvres. Chassis dimensions are identical to the N model, and fuel capacity is 12 litres, a two-litre decrease compared to the NC700 models. Despite the smaller fuel tank, the CTX’s claimed consumption of 3.7 L/100 km means it’s capable of travelling 325 kilometres on a full tank. Because of the lower seat, the underseat fuel tank has been moved slightly forward compared to the NC models, and unfortunately, the storage compartment, located where a fuel tank is usually found, has shrunk in size compared to the NC.

The CTX chassis uses 27.7 degrees of rake (0.7 degrees more rake than the NC) and 114 mm of trail (a 4 mm increase), though wheelbase is just 4 mm longer than the NC700S, at 1529 mm. This gives the CTX models slightly more relaxed handling characteristics.

I began our test ride on the $8,999 CTX700T. It was equipped with a taller accessory windscreen ($219.95) and hard saddlebags ($965). Our ride would take us eastbound out of Quebec City along the north shore of the St. Lawrence River, toward picturesque La Malbaie, about 140 kilometres away, and then back to Quebec City.

The 700T’s riding position is very relaxed, with pullback handlebars stretching back to meet your hands instead of the other way around, placing your torso upright. The forward-mounted foot pegs put your feet far enough ahead that they rest below your hands. The seat is indeed low, and even if you have a short inseam, you can get both feet flat on the ground. The bike also feels very light and is easy to pick up off the side stand, a benefit of the low centre of gravity.

I was glad our hosts from Honda had installed the accessories, because the forecast called for rain, and the tall screen added a measure of protection. The saddlebags, which can be colour-matched to the bike with replaceable coloured panels, also provided a place to store my rain gear, which was needed, as it turned out. These saddlebags are handy accessories that really broaden the appeal of the CTX700T. Curiously, there are two speaker-like grilles on the inner fairing, and we were told that they were incorporated into the design to accommodate possible future sound-system accessories, which would further enhance the 700T’s touring capability.

The counterbalanced parallel-twin engine is quiet and very smooth. It’s not huge on power output, but it has plenty of low-end torque, which made passing easy, even on longer hills. It provides enough power for a solo trip, but I suspect that if the 700T is loaded with a passenger and the accompanying luggage, the engine will struggle a bit. 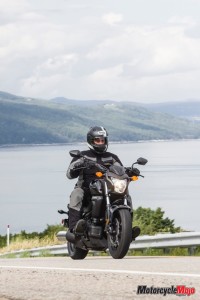 As claimed, handling is neutral and pleasant, and straight-line stability is unwavering. There’s a 41 mm conventional fork and a single shock, and to keep costs low, neither are adjustable. Fortunately, suspension compliance is a modest compromise considering the bike’s low seat height, and the CTX absorbs most bumps without harshness. It’s only the larger bumps that will send a jolt through the chassis. The suspension also does a good job of keeping the bike composed on twisty roads, which it manages quite well. In fact, if it were not for the forward-mounted foot pegs, the CTX could easily pass for a standard or naked bike in agility. Cornering clearance is moderate, and the CTX will touch its foot-peg feelers at a modestly quick pace.

I would certainly spend the extra dough on the tall windscreen, because when the rain did finally hit, it offered much more protection than the stock shorty screen. It does cause some helmet buffeting, and the level of buffeting varies depending on rider height. I experienced minimal buffeting, but a taller rider told me he’d experienced enough to blur his vision. I felt that the level of buffeting I experienced was a fair trade-off for the increased weather protection.

The $8,495 CTX700N is more cruiser oriented than the 700T, with a small headlight nacelle replacing the fairing, giving it a front-end profile similar to the naked NC700S. Although the riding position is identical on both machines, they feel very different from each other once you get rolling.

The first thing I noticed was just how much more nimble and flickable the 700N was compared to the 700T. The lack of a frame-mounted fairing and its accompanying, high-mounted mass changed the handling characteristics noticeably. The 700N felt more nimble and leaned into and out of turns quicker than the 700T, and its suspension felt firmer, though we were told settings were identical. It also felt peppier under acceleration, a result of lighter weight and less drag caused by the absence of a fairing. The trade-off, of course, is less weather protection, which is more fatiguing on longer rides.

The emphasis of both the CTX700N and 700T models is on ease of operation, low fuel consumption and effortless handling, and they deliver in all those respects. My biggest gripe with either of these otherwise very sensible motorcycles is the foot-forward riding position. After a few hours in the saddle, you get a sore bum – as expected, since all of your upper body weight is supported on your gluteus maximus. Mid-mounted foot pegs would have made much more sense on machines that otherwise encourage you to pile on the kilometres – the upcoming V-four-powered CTX1300, which shares many styling cues with the CTX700T, has mid-mounted foot pegs itself.

CTX700 models sold in Canada have ABS as standard equipment, though unlike other bikes in Honda’s line-up, brakes are not linked. This is a curious omission, especially since the bike is aimed at beginning riders, but it does drop the cost, which will make it more accessible to those same riders. And really, with ABS, there’s little need for linked brakes. Both models also come with manual six-speed gearboxes. Other markets get ABS as an option, as well as an optional DTC (dual-clutch) semi-automatic transmission. DTC transmissions haven’t yet caught on enough with Canadian riders to merit adding such a model here, but I’m sure if offered on a bike like the CTX, it would sell. New riders do request it, something I’ve observed while giving rider training courses.

Honda continues its trend of producing several different variations on a common platform, aimed at different customers. The company began with the NC700 models, and then followed up with the CB500 models. This latest variation offers yet another style of motorcycle that’s affordable, affable and for the most part (save the foot pegs), a sensible bike.