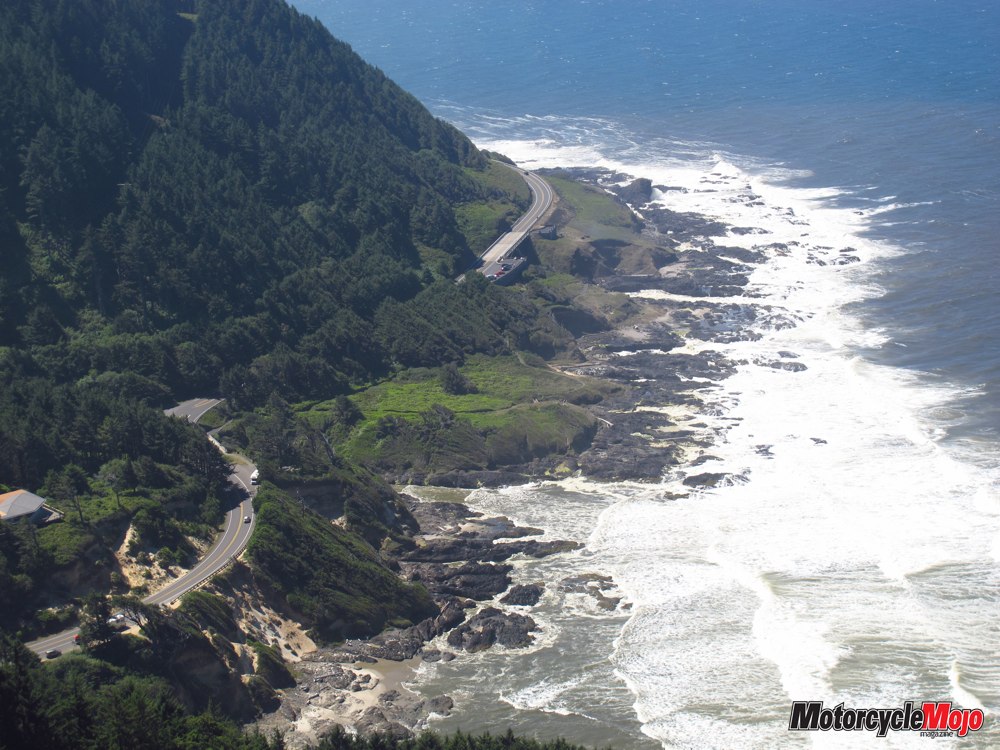 Poised between forest and sea, the road in front of me cut through a dense canopy of Sitka spruce, while to my right, the Pacific thundered and roiled, carrying off whatever stood in its way. Alternately fierce and serene, the ocean is never predictable.

Riding all the way to the Pacific wasn’t part of my original plan. When I decided to try a six-week experiment of working from the road, Lake Tahoe was as far west as I thought I’d get. However, when friends come calling, plans change. That’s how I ended up spending five days riding 500 kilometres along Oregon’s Highway 101.

I’d entered Oregon through the side door. After heading west from Montana and south through desert-like Washington, Highway 14 carried me 300 kilometres along the Columbia River’s north shore, a much preferable alternative to Interstate 84 on the Oregon side. I crossed into Portland, getting through the metropolis as quickly as possible. Temperatures had remained in the mid-30s for much of my trip, and I was eager to feel the cool ocean breezes and to wipe salt spray from my visor.

As I turned west onto Highway 6 from 26, I’m sure the drivers around me heard the audible sigh of relief through their rolled-up windows and air-conditioning fans. I was back in paradise, riding the curves through Tillamook State Forest up and over the Cascade Mountains. I’d been invited to camp near Tillamook with friends who were participating in a dual-sport ride. The visit was great – and the Pacific Ocean was only one sleep and 20 kilometres away. 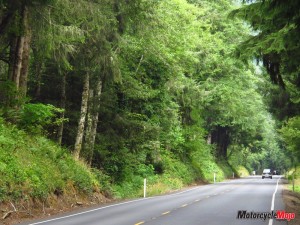 Emerging from the forest the next morning to sunshine and blue skies, I headed straight for the water. Whatever it is about the rhythm of waves and call of the sea that touches our spirit, it was calling mine.

In contrast to the rain forests and rocky outcrops that characterize much of the coastal area, rich grasslands carpet this region. Pioneers imported dairy cattle, and in 1894, with the help of Canadian Peter McIntosh, began what has become a world-famous cheese industry. A tour of the Tillamook Cheese factory and museum offers a fascinating glimpse of the area’s history. Where there’s a dairy, there’s ice cream, and you can’t leave without sampling it.

My plan was generally to head south, but now that I was at the ocean, it only made sense to ride as much of the coastline as possible. I made my way north, choosing Cannon Beach as my northern terminus.

Named for a cannon that washed up on the beach in 1846, it’s a pretty seaside resort town. Most of the picture-perfect buildings are clad in weathered shakes, and residents take great pains to preserve the natural history. If you want to browse through touristy shops and galleries, park in the centrally located municipal lot. By far the best use of time here is to get out onto the beach, where Haystack Rock juts 72 metres above the water. Home to many species of nesting birds, including tufted puffins, it’s part of the Oregon Islands National Wildlife Refuge.

Getting back on my bike, I returned south, relaxing into an extended coastal ride. Given that it was a beautiful sunny Sunday in August, traffic was heavy, but I’d expected that. The speed limit on much of Highway 101 is 45 mph (just over 70 km/h) – but why do you want to rush through such natural beauty on roads you may not pass through again? As you would expect, motorcycles made up a fair share of the traffic, but the vehicles in no way diminished the spectacular beauty I was riding through. 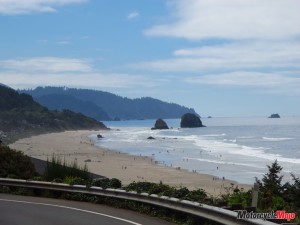 Frequent turnouts invite you to stop and take in the magnificent ocean vistas; take care when parking, though, as many do not have level ground. With friendly small towns to punctuate long stretches of uninterrupted riding, fuel for bike, body and soul is readily available.

Tillamook sits inland, so turn west at the main stoplight and catch the Three Capes Scenic Loop. It takes you along the water, a much more pleasant option than riding through town.

Just south of town, you can’t miss noticing a massive Second World War blimp hangar, touted as the largest wooden structure in the world. It’s been converted into a private aviation museum, although earlier this year, the owner announced they’d be moving that museum to Madras in central Oregon by 2016. Check its status before arriving if you’d like to tour it.

The afternoon was quickly drawing to an end, and it was time to make camp. Monday was planned as a workday, so I was looking for a campsite I could use as a makeshift office, where I could spend a couple of days catching up. I found it at the KOA in Waldport on Alsea Bay. Awarded “Top 50 Scenic Views” by ReserveAmerica two years in a row, I had a tent site overlooking the beach, with shade, Wi-Fi, water and an electrical hookup. It was hard to beat this office-with-a-view! If you’d rather have something a little more urban, continue a bit further south to Yachats, an inviting seaside village with big personality. You’ll find delightful small motels, coffee houses, wine bars and several gourmet restaurants, some of which feature fresh Dungeness Crab. Work is still work, even if it’s tempered by ocean breezes. After a couple of days, I was ready to move on, knowing from a trip here a decade earlier that the next stretch – to Florence – would be my favourite. Given its rugged and undeveloped nature, it’s one of the most scenic rides along the coast.

Three kilometres south of Yachats lies the coastal wonderland of Cape Perpetua Scenic Area in Siuslaw National Forest. Even though I’d just gotten underway, the pull to stop was irresistible. You’ll need a day pass, obtainable at the visitor’s centre, but that opens the door to all kinds of wilderness experiences. Forty kilometres of interconnected hiking trails branch out from the centre to take you through old-growth forests and spectacular views. A tunnel under the highway gets you right down to tidal pools where you can see ocean denizens like starfish, anemones, sea urchins, mussels, crabs and maybe even an octopus. Numerous signs warn of “sneaker waves,” large waves that can appear without warning and sweep you out to sea.

Needless to say, I kept one eye focused on the surf at all times. From the centre, an easy one-and-a-half kilometre hike on the Giant Spruce Trail takes you to a 600-year-old giant Sitka spruce that towers over 56 metres high and 12 metres in circumference. Shell middens, a vestige from the tribes who harvested the area’s abundant shellfish, can still be seen along the Captain Cook Trail.

Don’t leave the area without going up to the Cape Perpetua Overlook, the highest point on the Oregon Coast that’s accessible by car. You can hike up 215 metres on a trail, or do as I did and ride the twisty paved road with 11 switchbacks to the top. A short walk along the Whispering Spruce Trail takes you to the west point overlook, a stone shelter built in the 1930s by stonemasons of the Civilian Conservation Corps (CCC).

The surf pounds and waves crash against the rocks some 244 metres below, just as they’ve done for eons. From this lookout on a clear day, you can see 110 kilometres in each direction, from Cape Foulweather to the north to Cape Blanco to the south. Used as a lookout for enemy ships and planes during the Second World War, it’s now a lookout for migrating whales. As you would expect, lighthouses are an integral fixture on the rugged Oregon coastline. Most were built between 1870 and 1896 to aid the commercial fishing and shipping industries. Even though they’re no longer occupied, nine of them stand as stalwart sentinels, refusing to leave their posts.

Seven are open for public viewing and a trip back in time. Their locations, on rocky outposts and headlands, make them ideal for wildlife viewing, looking out for whale migrations and storm watching. Twenty kilometres south of Cape Perpetua, the circa 1894 Heceta Head Lighthouse sits on a rocky headland 62 metres above the water. It’s purported to be one of the most beautiful lighthouses in the world, and also one of the most photographed. The best panoramic view of the lighthouse is across the bay, from a turnoff one kilometre south.

Once past Florence, you enter the Oregon Dunes National Recreation area with 60 kilometres of shifting sand, some dunes reaching as high as 150 metres. To appreciate them, you’ll need to leave the highway at one of the entrances to the recreation area. From the road, the dunes block the ocean view. As you might expect, they attract huge volumes of off-highway vehicles, catered to by the local campgrounds. I’d intended to stop for the night here, but the Monster Energy display in the gravel campground and dozens of ATVs buzzing around told me there’d be no peace and quiet here.

The description of a KOA 100 kilometres south, in Bandon, sounded exactly like what I was looking for, and although it had already been a long day, I headed for it. On arrival, I knew I’d found an enchanted forest with secluded campsites tucked in amongst the towering trees. As if that wasn’t enough, the owner is also a rider and was most accommodating. My only regret was that I’d committed to being in Lake Tahoe and could only stay one night. It was the spot I had dreamt of when thinking about working from the road. I plan to return, next time for longer.

The next day I was due to head inland, away from the coast. This had not been my maiden trip along the coast, yet it was somehow much more scenic than I remembered. It makes me wonder how it will be when I return. I know from previous experience that if southern Oregon is as far south as you plan to go before heading inland, do yourself a favour and take Highway 199 – the California-Oregon Redwood Highway. You can reach it from the Pacific Coast Highway, 23 kilometres into California. You’ll be treated to 60 kilometres of curves through the sanctity of a giant redwood forest.