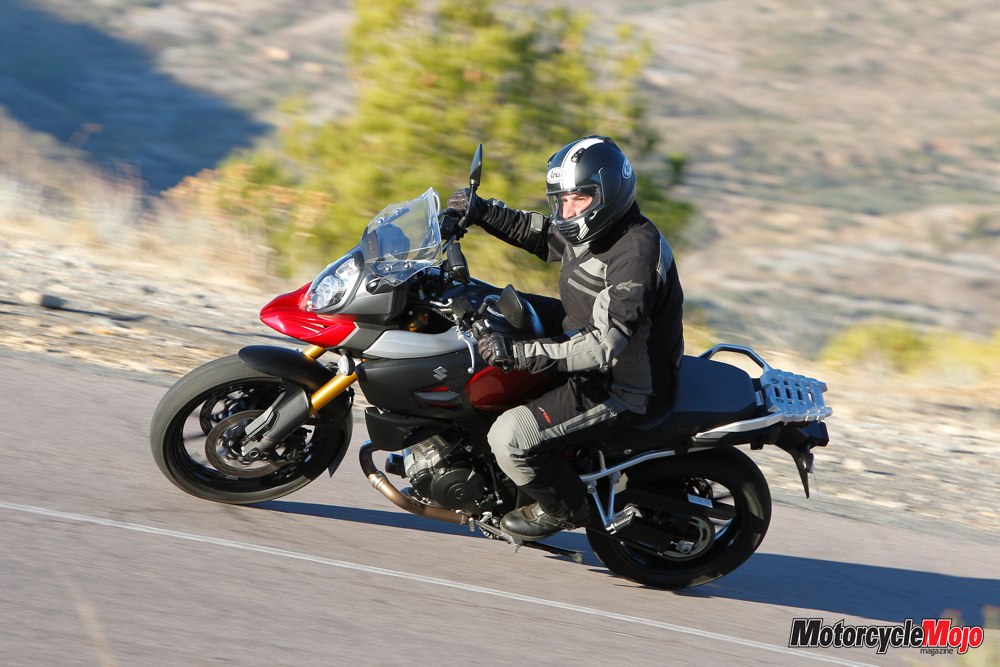 The 2014 V-Strom 1000 is generating excitement, and rightly so.
If a new V-Strom is in your future, you might want to order one soon 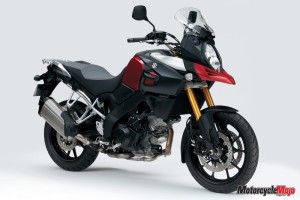 The Suzuki V-Strom 1000, introduced in 2002, is one of those bikes that quietly developed a following over the years. It featured a detuned version of the TL1000’s 996 cc, 90-degree V-twin and it had a competent aluminum frame, though some found the styling to be somewhat polarizing – you either loved it or hated it. Suzuki sold almost 12,000 units in its inaugural year. Excitement for the machine dropped off quickly, however, and the following year, only 3800 were sold. A mild model revision in 2004 boosted sales somewhat, but the V-Strom 650 was also introduced that year, and it immediately outsold its bigger brother. The smaller V-Strom had continued to sell well (it still outsells all of its 650 to 800 cc competitors, including the dirt-cheap KLR650), while the bigger DL1000 V-Strom’s sales continued to dwindle. In 2008, the model was discontinued in Europe because it no longer met emissions standards, and by 2010, sales had dropped to a low of just 400 units worldwide. Even a drastic reduction in pricing and the introduction of an accessorized SE model couldn’t save the big DL, and the bike was quietly discontinued in Canada last year.

Suzuki launched the 2014 V-Strom 1000 in Almeria, Spain, and it is new from the ground up. Styling is more contemporary, with the stacked headlights and fender beak that are now adventure-bike standards. Although I described the V-Strom’s new snout as ‘strada-ish’ in my notes (referring to the Ducati Multistrada), the distinctive adventure-touring beak was actually a Suzuki innovation, first appearing on the DR-Z Dakar racer in 1988, and later on the DR Big. 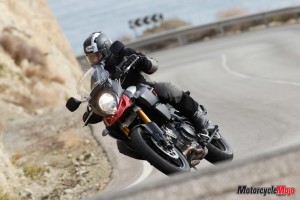 There’s a lot of plastic on the bike, and usually that’s not a good thing on a machine that can potentially be ridden off pavement, but a closer look reveals that Suzuki has cleverly covered the steel fuel tank with plastic panels to protect it in a tip-over. Plastic covers over the frame, by the foot pegs, prevent scuffing. At the rear are plastic panels concealing the mounting points for the saddlebag supports, providing a clean-looking rear end whether you get the accessory bags or not.

The engine is almost entirely new – only the valve train and most of the transmission components are carried over from the previous version. Displacement has grown to 1037 cc, achieved through an increase of 2 mm in bore. The cylinder heads now have two spark plugs each, and although the compression ratio remains at 11.3:1, combustion efficiency has improved, allowing new ECU mapping that improves power and fuel economy, the latter by 16 percent.

Power is up only marginally, now at 99 hp with torque peaking at 75 ft-lb (previously 96 hp and 74 ft-lb), but what’s really important is the power delivery below 4000 rpm. Torque climbs considerably just off idle, now peaking at just 4000 rpm, which is 2400 rpm sooner than on the previous bike.

“The alternator flywheel is 15 percent heavier for smoother bottom-end response, and the regulator/rectifier is now an open type, so it disconnects the alternator instead of shorting it to ground when the current draw is low. This reduces mechanical losses, and it will also run cooler. Output has also been bumped to 550 watts to facilitate the addition of electrical accessories.

The only difference in the gearbox is a shorter sixth gear, which actually reduces vibration at highway speeds. The V-Strom now uses a mechanically assisted slipper clutch, which reduces lever effort by 13 percent.

A new exhaust pipe has a single, low-mounted muffler, lowering the centre of gravity and saving 4.7 kg. Other weight savings have chopped about 8 kg from the V-Strom, which now tips the scales at 228 kg wet.

The new frame is still constructed of aluminum, but is 33 percent more rigid and 13 percent lighter than the outgoing model. Steering geometry has been altered, and the wheelbase is 20 mm longer at 1555 mm, though the swingarm is 36 mm longer than before for improved suspension compliance and weight balance. Fork rake is one degree steeper at 25.3 degrees, and trail has been reduced by 2 mm to 109 mm.

More adjustability has been added to the suspension components, and the 43 mm inverted fork is now adjustable for preload and compression and rebound damping, the latter via an easily accessible knob.

Brakes are supersport-spec, with Tokico radial-mount, four-piston front calipers replacing the former twin-piston sliding calipers. Front discs remain 310 mm, as do the 260 mm rear disc and single-piston Nissin caliper. ABS is now a standard feature on the V-Strom 1000, where it was formerly unavailable even as an option. The V-Strom also features Suzuki’s first motorcycle traction-control system, with three modes (1, 2 and off), selectable by a handlebar-mounted switch.
The riding position has been altered, with the handlebar moving 34 mm rearward and the foot pegs also moving rearward by 15 mm. The seating position is very relaxed and upright, and the seat-to-fuel-tank junction has been narrowed making it easier to plant your feet at a stop and to better enable stand-up riding. Suzuki had a previous-generation V-Strom strictly for display purposes, so we couldn’t make a back-to-back riding comparison, but static seating revealed that you sit deeper into the new V-Strom, as opposed to sitting on it. Seat height is 850 mm, which suited my 32-inch inseam just fine, but there are two optional seats, one 30 mm lower and another 35 mm higher.

It was unusually cold in southern Spain during the launch, and we headed straight into the mountains north of Almeria in the morning; the higher we rode, the lower the temperatures got. Wind protection is quite good from the shoulders down, and there’s no buffeting with the screen at its lowest position and shallowest angle. Putting the screen at its steepest angle cut the windblast a bit at the helmet, and buffeting only began above 120 km/h. I later tried the screen in its highest position, and it offered a little more protection, but made buffeting more prominent regardless of angle position. It remained tolerable at speeds below 120 km/h, but at higher speeds, it shook my head enough to blur vision.

Clutch effort is light, and the gearbox still has a nice, light, positive feel. Claims of improved bottom-end power were not exaggerated, and the new V-Strom feels really strong from almost off idle to about 6000 rpm, where power flattens out but remains strong all the way to redline. There’s no need to rev the engine unnecessarily, and the V-Strom feels best when being short-shifted. The engine is remarkably free of vibration, even at high speeds.

We rode on a variety of roads ranging from divided highways to ultra-twisty, switchback-laden mountain roads, and I couldn’t find fault with the V-Strom’s handling. It manages high-speed sweepers like it’s on rails, steering is light and neutral, there’s lots of cornering clearance (foot peg feelers touch when you’re banked way over, but it’s unlikely you’d need more cornering clearance unless you’re on a closed course), and the brakes, as mentioned earlier, are supersport strong.

Despite the addition of traction control, there are no ride modes, which I would have liked because the only criticism I have is that throttle response is slightly sensitive at low speeds. It’s not overly abrupt, but when in town at low speeds, hitting bumps made the bike lurch forward if I wasn’t paying attention. This might hamper off-pavement riding, but we didn’t venture off paved roads during this launch.

Very cold morning conditions caused frost to form on some of the roads, but our lead rider slowed us to almost a walking pace in those areas, so I didn’t get a chance to test the TC, which was set at its highest level (2). I did whack the throttle open exiting some second- and third-gear corners, but the TC light doesn’t flash when the system intervenes, and since it retards timing and controls the secondary throttles (it doesn’t cut ignition or fuel), I couldn’t feel anything but smooth, progressive, if somewhat subdued acceleration. Adjusting the traction control is easily done while riding, though you have to make your selections with the throttle closed.

The suspension is firm enough to handle an elevated sporting pace without harshness. When I first got on the bike the shock was a bit soft, causing the rear end to wallow when exiting turns, but about three quarters of a turn on the rebound adjuster cured that. I also adjusted for a taller ride height, and the bike easily dove into turns while moderately trail braking. Our test ride, at 300 km, was relatively long by press-launch standards, and I’m happy to say my backside didn’t complain.

Aside from the GW250, Suzuki hadn’t introduced a completely new motorcycle in Canada since the Gladius in 2009. Many people, even at Suzuki, acknowledged that the lack of fresh material was hurting sales. The new V-Strom 1000 is not a wasted effort. And the best news is its price. At $11,999, it’s just $500 more than it was in 2012, and the list of standard features is outstanding at that price point. In fact, the base model is considerably cheaper here than it is in the United States, where it retails for $12,699, which at the exchange rate on the day of this writing, converted to just over $14,000 Canadian. Some bike makers cut corners to attain a certain price point, but Suzuki didn’t skimp, from the adjustable suspension, to the adjustable levers, to the ABS and traction control.

By comparison, the Kawasaki Versys 1000 costs $13,999 and the Yamaha Super Ténéré costs $16,499, and the new V-Strom can easily go head-to-head with these bikes on the road. Although it doesn’t have the outright power output of its litre-plus competitors, its performance is good enough that it can now be considered an alternative choice for someone looking for a large-displacement adventure-tourer.

There’s also an SE model, dressed with hand guards, hard saddlebags (55-litre total capacity) and a centre stand for $1000 more, and it sounds like a pretty good deal, because purchased separately, the same accessories would cost $1660. Suzuki has many other touring accessories available, including a 35-litre top case, a tank bag, taller windscreen, heated grips, GPS mount, HID lights, and various protectors and trim pieces. Some test riders were complaining that the V-Strom should have come standard with heated grips, but I think that considering its low price, it’s not a big loss. Aftermarket grips can be had for about $90.
The latest V-Strom 1000 is a strong performer and a serious addition to the category. It’s a great bike with very little to fault, and it’s backed by an outstanding price. My guess is, if you’re considering buying one this season, you should place your order now. “