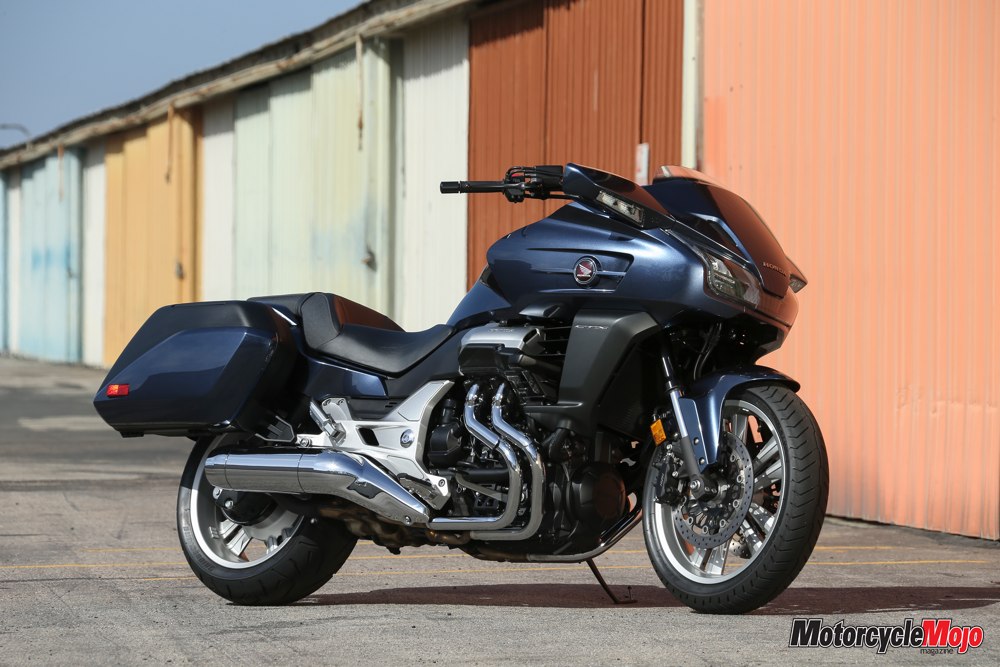 This new Honda doesn’t quite fit into a specific category . . . at least not yet

Few motorcycles I’ve ridden have stirred as much debate as did the 2014 Honda CTX1300T during its press launch, held in San Diego. For nearly an hour, two other motojournalists and I discussed whether it is a cruiser, a touring bike, sport-tourer, or something else entirely. 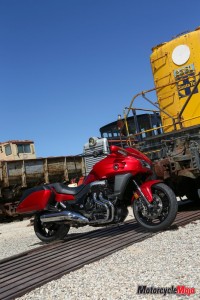 It was easy to understand our indecision: its styling features elements of all the above. Each of us presented valid arguments supporting our perception of the machine. It has a low, 725 mm seat height, mid-mounted foot pegs, and a long, 1640 mm wheelbase, all of which are cruiser attributes. However, its 1261 cc, 90-degree V4 engine and wheel sizes hint at its ST1300 sport-touring pedigree. Yet it also has integrated saddlebags, a Gold Wing–like fairing and a sound system, all of which are clearly touring-bike items.

Contributing to the CTX1300’s ambiguity is its styling. It has a long and low profile from the side, it looks quite attractive – even sporty – from the front, and it is completely inconspicuous from the rear. The look seems to work, because bystanders, and even other riders I encountered on the road, took notice – some even gave it a thumbs-up.

The CTX1300’s engine is, in fact, sourced from the ST1300, though it has been detuned by way of different cams, a lowered compression ratio and smaller throttle bodies. This detuning has lowered output to 83 hp (according to European specs) from 124, and peak torque is down to 78 ft-lb from 92. This is a significant decrease in output, but it doesn’t tell the whole story. Peak output now arrives 2000 rpm sooner than on the ST1300, so the drop in power doesn’t feel as drastic as the numbers would suggest. The CTX also has an unusually low redline; at an indicated 6500 rpm, it is 2000 lower than the ST. Like the ST, the CTX has five speeds and shaft final drive.

The frame-mounted fairing features styling cues like the swept-back headlights, side vents and shorty windscreen from the Honda F6B, which itself was inspired by the Gold Wing, and beneath the bodywork, a double-cradle steel frame. The fairing-mounted mirrors give the bike a low-profile look, and they work adequately, except that the upper, inner quadrant reflects your hands and arms. They also needed a fair amount of pressure to adjust.

The CTX joins the new Ducati Diavel to be among the first bikes to offer LED headlights as standard equipment. Unfortunately, I did not get a chance to test the bike at night, but they sure look bright in the daylight. Inside the fairing, you’ll find a sound system that features Bluetooth connectivity as well as a USB port hidden inside one of the two small fairing compartments. The sound system allows you to pair with your smart phone, and with a helmet-mounted communication system, something I had criticized the latest Harley touring bikes for lacking. 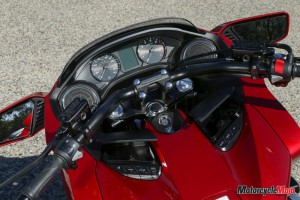 Two versions of the CTX1300 are available in the United States; there’s a standard model and the Deluxe. In Canada we will only get the latter, but it’s called the CTX1300T and comes equipped with traction control, linked ABS, self-cancelling turn signals, heated grips and a centre stand. Also, we only get blue or red as colour options, whereas black is also available in the States.

Honda says that rider comfort was among the top priorities when the bike was designed, and it’s difficult to dispute that claim. One of my biggest criticisms with the smaller CTX700 was with its foot-forward, chopper-like riding position. The CTX1300 has mid-mounted foot pegs and a swept-back handlebar that puts you in a easy, upright position. Unlike the 700, you can relax your legs, and you don’t need to constantly pull your knees in as the wind tries to pull your legs apart at speed. The mid-mounted foot pegs also help reduce the strain on your lower back.

The seat is very wide, and its raised bolster is far enough behind to allow you to move around and stretch your legs a bit. It’s a very supportive seat that provides touring-bike, all-day comfort, proving itself quite worthy after a day of riding, with no rider soreness or fatigue to report. Its shorty windscreen, however, did little to provide touring-bike wind protection. Your torso is out of the wind stream, but everything above it gets the full blast, though at least it’s free of buffeting. A taller accessory windscreen is available, which I sampled on a standard CTX, and it works very well. 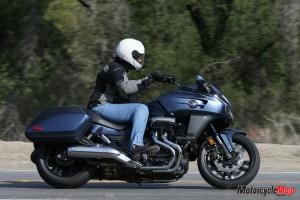 The CTX has relatively light, neutral steering, although you do feel its long wheelbase and fat, 200-series rear tire in tight turning transitions, where it takes some effort to straighten up before leaning back down again. It does, however, handle better and has more cornering clearance than almost any cruiser I’ve ridden, and it doesn’t push wide like some fat-tired bikes tend to do. It also feels planted and very stable, even when blasted by wind coming off passing trucks. Foot pegs will eventually touch down when turning, though a quick look at the rear tire after a particularly enthusiastic section of switchbacks revealed it was worn almost to its edges.

The engine is almost electric smooth, with little vibration making its way to the rider. And there’s ample pulling power, especially in the lower rev range. It has been a while since I’ve ridden an ST1300, but I recall it had a much stronger top end. This revised powerband isn’t a deficit on the CTX, because it is broad and prairie-flat, and there’s still plenty of top-gear passing power available at highway speeds. Bottom-end power is so strong that the bike can pull top gear smoothly and forcefully from speeds as low as 40 km/h. And although it’s unnecessary to spin the engine into the upper rev range, it sure sounds sweet when you do.

While the suspension isn’t sophisticated in specs (the only available adjustment is rear preload), it is sophisticated in feel and control, and is remarkably compliant front and rear. It helps keep the bike planted through high-speed sweepers and does a good job of damping road irregularities, at least those you’d encounter in southern California. Maybe a bit more rebound damping would be needed for a very aggressive pace, but I don’t think a CTX buyer would be interested in chasing sportbikes, anyway. The only glitch in the bike’s smooth ride is an occasional bump-induced jolt that makes its way up the handlebar and rattles your fingertips. It’s not the suspension that causes this; it’s the rigid mounting of the handlebar, which is long and resonates when you hit sharp bumps. Rubber mounting would have cured this.

One suspension oversight is the lack of an easily accessible knob to adjust the rear preload; it looks almost impossible to get some swing on the shock’s adjustment wrench with the saddlebags in the way. Easily adjustable spring preload is convenient when carrying a passenger or loading up the saddlebags.
The saddlebags are easy to open, and each boasts a 35-litre capacity, but they are bolted onto the bike and cannot easily be removed. We were told that the CTX1300 looks quite nice without them, so a quick-detach mechanism would have been a welcome addition. There are two small covers on the tailpiece, just above the saddlebags, that conceal mounting points for a stylized accessory luggage rack. A passenger backrest and top case are also available, though disappointingly, the top case looks like a universal aftermarket box; a low, streamlined box would have better accentuated the bike’s sleek profile.

We didn’t have a chance to measure fuel consumption, but the CTX is claimed to average 5.8 L/100 km using the European measuring system. This would give it a theoretical range of more than 330 km from its 19.5-litre fuel tank. Alternator output is rated at 600 watts, enough to power a few additional accessories like heated riding gear.

The sound system works fine at lower speeds around town, but wind at highway speeds defeats the speakers’ output, so pairing to a communication system is the way to go. The centre-mounted switches are easy enough to use, but those small storage spaces in the fairing, although somewhat useful, are difficult to access, since their doors only open to about 30 degrees so as not to come into contact with the pullback handlebar. The right one is deeper and is meant to store your media device.

Honda claims to have created a new (as yet unnamed) category with the introduction of the CTX1300, though I think any single category would be too narrow to describe this bike. Truth is, it wears many hats, and it can commute or carve winding roads as easily as it can tour the country (with the help of the taller screen).

At $18,999, it falls into the premium bike category, and it has several premium features, like the aforementioned sound system, saddlebags, traction control, linked ABS, heated grips and centre stand. Some might balk at the price, but when compared to some of its possible competition, the CTX has plenty to offer. A Kawasaki Vaquero ABS, for example, costs $20,299 and is nowhere near as nimble; a Harley Street Glide costs $4,000 more than that and suffers from the same, non-sporting attitude. However, at the other end of the spectrum is the Yamaha FJR1300, which costs $19,200 if you add the bags, has cruise control but lacks a sound system. The FJR also has more power and a sportier ride.

Although Honda’s category breaker seems to fit into a class of its own, it handles great, is very comfortable, and with the addition of the tall screen, it offers decent all-weather protection. Honda seems to have reintroduced the everyday motorcycle.